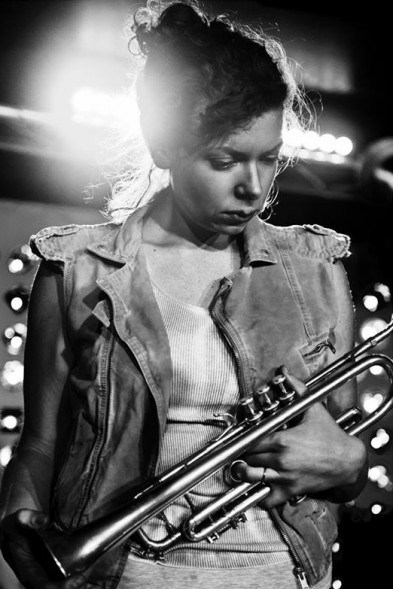 I spoke with trumpeter, Stephanie Richards in April about her album, Fullmoon, which was released on Relative Pitch Records on May 18th. But of course, even more than I wanted to speak about her stunning, enigmatic, creative and expressive album, I wanted to talk about her womanhood. This interview was done before my debut interview at Downbeat with Sara Serpa and the We Have Voice movement. She and I had no idea what was coming, but that was because we live it. Richards and her female identified, women and LGBTQ colleges in free jazz and creative music live out the pain, alienation and confusion that being a jazz musician can bring. They also experience the love, community, happiness and passion that arises from being free enough to make the music they want to make.

I talked to Stephanie Richards via phone about Fullmoon, musical and spiritual ideologies, how menstrual cycles affect our bodies, and how privilege makes being a woman in jazz a somewhat difficult realm to navigate.

Tell me the inspiration behind you album, Fullmoon?

The composition was composed in a physical space, meaning I was surrounded by percussion instruments and everything was set up in a circular stage set. And I moved in a circuitous way between all of these percussion instruments, which were also circular. It was a beautiful imagery that infused the session that I was playing with Dino. He was doing all the live sampling. I was interested in this idea of waxing and waning and how we live on cycles. So, I was playing with this idea of energy and velocity, and also, dissipation and diffusing energy.  This was not on purpose or realized, but after the session, we left and looked up, and there was a massive gorgeous full moon. There was no title for the music at that point. I just had these ideas of working with shapes and circles, so when we saw this big beautiful moon, Dino and I were like, “Oh, there’s our title right there.”

The album was also coming from an idea of reflection because the trumpets on the album sound processed like I have electronic processing on my own trumpet, but it’s all acoustic. Dino was just live sampling my sound. It sounds processed because it’s playing against the surface of these percussion instruments. So, those reflections and the sympathetic vibration that the other instruments vibrate which is where the all the beautiful timbres are coming from.

Speaking of the moon cycle, it is understood that the moon denotes a feminine energy or archetype in many spiritual ideologies. The moon also balances with our menstrual cycles and women.

For women and our menstrual cycle, it’s still today seen as this thing you don’t talk about. But it’s one of the most incredible features of modern life, and advanced as we are, we can’t get to the fact that we’re still animals, and that there’s this deep connection that we can’t fight between our environments.

When you are playing a gig and menstruating, does that make you feel like an outsider?

I would assume most women would feel [like an outsider] because it just kind of sucks when you’re on your period. It’s uncomfortable. A couple of year ago, at the summer Olympics, a Chinese swimmer, Fu Yuanhui, hadn’t performed as well as she was hoping. While she was being interviewed she said that her period had started the day before, so she wasn’t as strong she would normally be. She was like, “Oh, well. I did my best.” It was a bit of a media frenzy because people were [gasps].  I thought it was so inspiring because here is a professional athlete who was acknowledging that sometimes her body isn’t always so strong, or that the strength is going into different parts of the body.

What is it like to work in such a male dominated musical field like jazz? Not to sensationalize, but some women and female identified artists have had horror stories and others have not. What is your experience?

I mean, there are horrors, and sometimes they’re tiny horrors. It’s these micro [experiences]. And they become a part of how we move throughout the world and how we choose to carry ourselves. It’s so powerful. For the most part, in general, I’m so lucky. All of the people I collaborate with are incredible, wonderful people. I wouldn’t be working with them if they weren’t. Even now, I still feel like an outsider on occasion. I felt that way when I was trying to make as a young woman trumpet player in school, especially. So, when you’re on the outside, you have two choices: you can do what you can try to do to fit in or you can acknowledge that you’re on the outside and make that a part of your voice. I remember a moment when I was studying more classical music when I was younger, and coming to that conclusion. I was sitting in the middle of this orchestra section with a bunch of male brass players, where it was kind of this bro ideology, and I remember having this moment because the guy next to me burped so loudly and it was quite gross.

I remember thinking, “What do I do? Do I burp back or should I just laugh?” It’s these little things that sometimes are done to make you feel even more excluded. I know it sounds superficial, but it was a moment for me when I was trying to figure out how I was going to fit into that sort of puzzle because my piece didn’t fit the same way. My edges are just different. I wondered how was I going to try to deal with it and still be true to myself. I just accepted that I’m not like [everyone], and that’s okay.

I’m going to express myself the way I can and sometimes, there’s more power inside of that. But if I focused on the real horrors, it’s heartbreaking. I choose not to move past and not be in those situations as best as I can. As I’ve grown into my career I learned not to allow the dismissive comments, offhand remarks and jokes become a part of me. If I accepted every invisible aggression into myself, it would break my heart. I have learned to move through and past those “invisibilities”; as your article quoted Alice Coltrane,  “you’ve got to hold your head high and walk through the fire.”

Do you feel successful? Do you think you could have been more successful in jazz if you were a man? Are you happy with where you are?

I think about that a lot. I think about it also when I work with younger women musicians as a teacher, even when I’m doing workshops with kids, and seeing how it starts at the very beginning for all of us women of not being empowered, and not being accepted to being leaders and speaking our opinion. So, I think about that. Had I been a man, of course, I would play very differently and I’d find myself in a different place. But a lot of my music is on this experimental edge, more on the outside, and I like that. Sometimes, I think it would feel so good to feel so confident when I see some of my [male] colleagues. How would it feel if I weren’t defying expectations the second I open my mouth? How would it feel if I was expected to succeed instead of this idea that [women] are expected to not succeed. I think that’s a powerful weight we fight against all the time.

The interesting thing about privilege is that it is invisible to those who have it. The privilege I see that male musicians experience is something they do not notice.  As a woman trumpeter I have often felt I’m on the outside. My credibility must to be proven, as it’s not expected. This perspective is a part of my identity and I cherish this lens through which I see through. I wouldn’t trade it for the world.

Absolutely. I wouldn’t trade it for the world.

Do you consider your music to be free jazz or experimental?

There are so many terms floating around right now. I think creative music is a big term that some musicians are working with. I like the idea of experimental music. To me, it just feels like there’s flexibility in that term, at least in 2018, of that it can mean. Experimentalism can involve performance art, it can involve electronics, but there’s also a really deep strain coming from the AACM [Association for the Advancement of Creative Musicians] of experimentalism coming from free jazz through the AACM. So, I feel like jazz is one of the roots of the idea of experimental music. It’s so hard to say. I’m so deep into the world, it’s hard to know what to call it.

I know some musicians push against the term “jazz,” but for me, if others consider me a jazz musician, it’s a deep honor because that’s where my heart is.