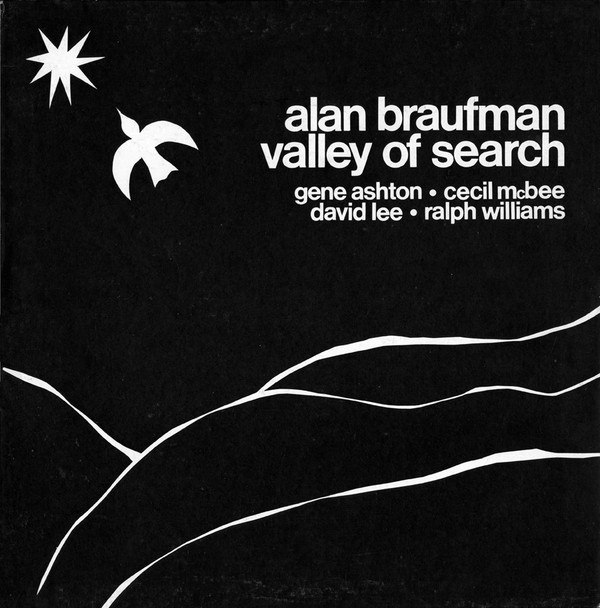 At the height of the 1960s through 1970s Cecil McBee was a very busy man. The bassist extraordinaire had appeared, probably, on hundreds of Jazz LPs ranging from unknown to classic. Just scrolling through my personal record collection, or his Discogs page, can boggle the mind of any collector, or new jack to the game, of how many classic and collectible records this brother played on. Michael White, Pharoah Sanders, Grachan Moncur III, Denny Zeitlin, Jackie Mclean, Dannie Richmond, Andrew Hill, and Charles Lloyd are just a few of the bigger names collectors might recognize. Then there were the smaller names: Marc Levin, Huey (Sonny Simmons), a young Norman Connors, Dick Griffin, Billy Parker, and Joanne Brackeen to mention a few. I was not completely unfamiliar with Alan Braufman’s Valley of Search (India Navigation, 1975) when our head editor slid it my way a few days ago. I’d seen the cover floating around on the internet and potentially in a few shops, but had never heard the LP. Braufman’s sole LP has recently been reissued, and it fits right into the scope of what many listeners of experimental music are tapping into these days. Plus it features Cecil McBee on bass (insert smiley face emoji).

I will start off, as a necessity, by saying that Valley of Search is not a Holy Grail record. It is not super rare, it does not contain a big Hip-Hop sample, and it does not feature anything that seasoned listener of Jazz (including any annoyingly named sub-genre of Jazz) has not heard before in her or his searching journey. It is a good record. Poetry, chanting, bells/ whistles, hard overblown horns, polyrhythmic drumming, and a little groove here and there make up a lot of the 43-minute suite.

What sounds like a zither opens up the first movement entitled “Rainbow Warriors”. McBee and drummers/ percussionists David Lee and Ralph Williams soon join in for the free form fun. Floating bells soon segue into “Chant.” Heavily dominated by poetry (it is not clear who it is recited by), it also features Braufman’s beautiful flute work that gives way to his alto saxophone. The blowing and bells fade into a section entitled “Thankfulness.” This portion is one of the highlights contained on the record. It starts with a Cape Jazz inspired riff that continues throughout the first half, while the second half is dominated by heavy drums and percussion.

A few sections later comes “Miracles,” and in my humble opinion, it is the most unique and beautiful section of the record. A 4-minute bass solo, it is a perfect place to take your ears to rest and process everything that you’ve heard from the group thus far. “Miracles” is reminiscent of the opening of McBee’s LP Mutima (Strata East, 1974), cut only a year earlier (it should be noted here that his records on India Navigation are very worthwhile efforts as well).

Valley of Search sticks to a theme through to the end. The last few pieces could have easily been at the beginning of the middle. It is a consistent LP, however, it will not be a revelation to any seasoned listeners. The Coltrane, Ayler, Sanders, and Shepp influences are all over this LP, as they are predominant on many records of the era. But that should not stop you from taking a listen. The beautiful cover art is minimal, yet fits the mood conveyed on the LP. The first Archie Shepp LP I heard was Mama Too Tight (Impulse! Records, 1967), and it remains a favorite. It was also an entry point into understanding the musical process of the period. I’m certain that Valley of Search will do the same for others.