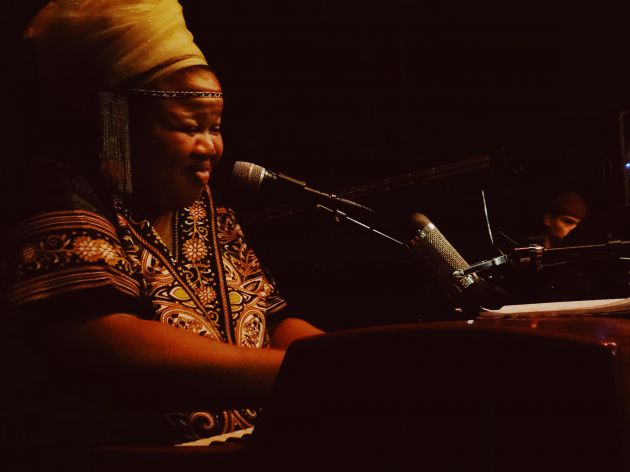 Chicago based composer, clarinetist and pianist, Angel Bat Dawid took the time to speak with me about her new album, The Oracle (International Anthem), which was released on February 8. Dawid’s spiritual collection of music takes you through the watery depths of travel, ancient and ancestral connections, and improvised composition led by the talented multi-instrumentalist.

Dawid is kind, enthusiastic and I believe the best part of her nature is that she is “very serious” about about being happy and being herself. Dawid’s unique DIY approach to recording, The Oracle which was all captured from a four track recorder on her cell phone makes music production into the digital age without taking away from her vintage, mystical compositional imagination.

Angel spoke to me about the origins of a number of songs from the album, her inspiration from travel, artist and environmental connectivity, and her ability to turn the world into her artistic musical canvas.

Your album, ​T​​he Oracle is beautiful. I hear remnants of Nina Simone, Alice Coltrane and others. What are you musical influences?

They are definitely influences of mine, especially Alice Coltrane and Nina Simone. Albert Ayler, John Coltrane, I am inspired by a lot of artists from AACM, Art ensemble of Chicago, I could go on and on. I have a lot of records. I learn from [my records]. They are my university. It’s part of my artistic practice to listen to a bunch of Alice Coltrane records. I used to work at a record store, so I listen to them and play [along] with them. A lot of my compositions come after I’ve listened to a lot of music – Archie Shepp, all the heavy hitters. I’m addicted to it.

You recorded your record completely by yourself, overdubbing, mixing – how long did it take for you to choose the songs and produce and put The Oracle together?

This was an accumulation of a lot of different songs. I had been approached by Scottie McNiece of International Anthem. He heard me around town and asked, “Do you want to do an album?” I said, “Ok. I’ve got some songs.” The only reason why I did them myself was whenever I had a gig, I would compose something new for it. Depending on whatever ensemble I had, some people could read music and others couldn’t. So, I recorded all the parts, so that way, everyone could listen to it and have really quick rehearsals. A lot of the songs came from that.

I’m with a music collective called Participatory Music Coalition and we started in 2014 because we were jamming all the time and we were really inspired by AACM. We didn’t want to be a band, we wanted to be a collective. For time purposes, we would record all the parts, so I had a bunch of songs like that. When [Scottie McNiece] approached me for a new project, I thought, “Well, I’ve got to compose some new stuff for it.”  Songs like, “Impepho” and “We Are Starzz,” which I recorded like two or three weeks ago because I had a gig at Winter Jazz Fest. That’s my tradition. I always want to compose something new for a gig, so “We Are Starzz,” and I sent it out to my ensemble, and asked Scottie if it was too late to throw it on the album and he liked it so that song, “Impepho” and the title track were the only new songs I made.

The song “London,” I wrote that in London. I went there for my birthday because all my friends and Art Ensemble of Chicago was performing on my birthday, so I had to make that. International Anthem had some shows, so I was asked to play just for leisure. And the Airbnb I was staying at actually had a piano. I was really inspired, there’s a really cool [scene] coming out of London.

It was a mix of different things and timing, and I chose the songs I felt [were right].

I was going to ask if the different locations you were in inform the foundation of the composition on your album?

Impepho is an incense. I went to South Africa in June and that was life-changing. I was involved in the music scene. I bring my clarinet where I go because I don’t know if someone will ask me to play, and if they don’t, I’ll play under a tree or something. I can totally hear its influence on my music. [The song] “Cape Town” was from a jam session in Cape Town. That trip was on a whim [like London], I just decided to go and had no plans. I asked my friends if there was someone I should connect with and Asher [Simiso Gamedze] asked to jam. We had this crazy jam session and I added it to the album because I want to encourage the world to jam more often. You don’t have to be an expert musician. Can you find two spoons, can you hum? I want to get people together and jam. What if Asher and I wouldn’t have done that? It wouldn’t be on the album.

Why did you name the album, The Oracle?

My instagram name was “Angel the Oracle” because years ago, a friend of mine told me I reminded him of the Oracle on The Matrix? I always liked the the Oracle on the Matrix. She was a Black woman, and you got all the answers to everything in the Black women’s kitchen. It was very simple, but also super deep.

Does The Oracle tell a story? If so, what are you trying to convey?

The whole album is a message. I prayed over everything. All the stories are important. And the DIY nature of it is important. You don’t have to save all your money and go to a studio. If you have music right now, just do it right now. I found a generic multi track recording app on my phone and downloaded it on my phone, and I just started to record stuff.

Tell me about your experience of being a Black woman jazz musician and how being in your body creates the specific kind of interactions you have as you move through life?

That is a great and important question because there are challenges being a woman and being a Black woman musician, and what is assumed that I am supposed to be and what I’m not. When I do something somewhere it’s assumed that I am a singer. There’s no way that this Black woman could be a multi-instrumentalist or know a lot about jazz either. A lot of people brush me off.