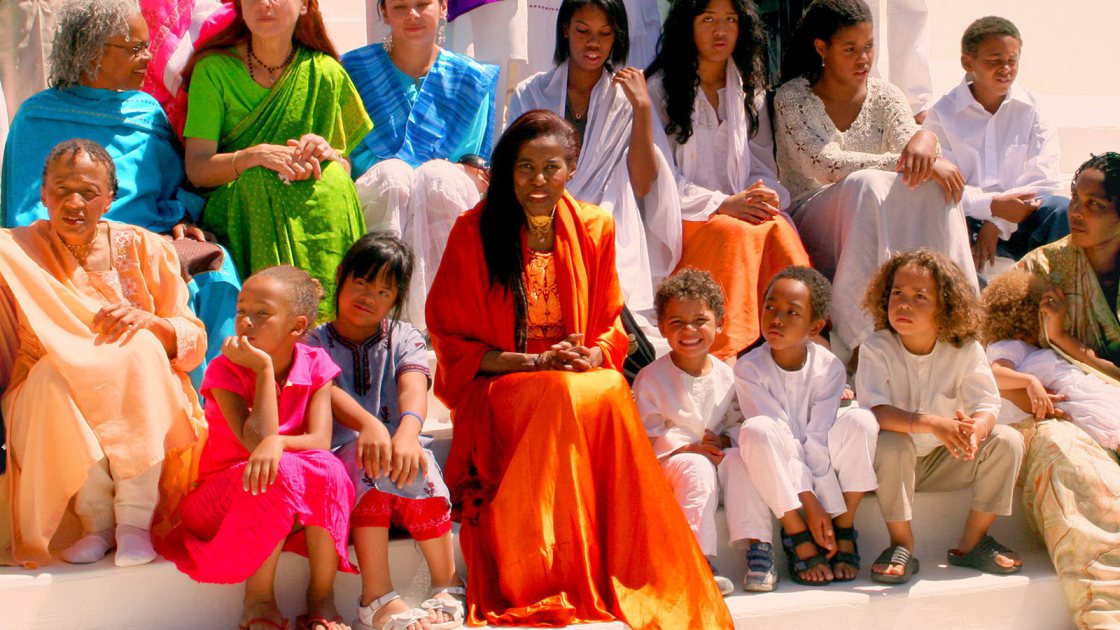 One thing I am working on these days, in my personal life and in my writing life is to not be presumptuous. Without admitting that presumption is an overwhelmingly prevalent trait in my personality and work, I believe it is not only important to listen, but to go back and check myself – to go back and check the “facts.”  So, before I proclaimed that the Alice Coltrane Turiyasangitananda record and debut world music compilation from David Byrne’s Luaka Bop Records, Spirituality Classics 1: The Ecstatic Music of Alice Coltrane Turiyasangitananda sounded almost completely different than her previous works, I went back and listened to the catalog of her music that was available on Spotify.

I listened to the first few minutes of each record and audibly examined 17 of her albums, including her Carlos Santana collaboration record, Illuminations. The only album that very loosely resembled this newly issued collection of works was the 1976 album, Radha-Krsna Nama Sankirtana which embodied the singing of a chorus of voices.

Upon hearing the silky voice singing on the lead single and track two from the new album, World Spirituality Classics 1: The Ecstatic Music of Alice Coltrane Turiyasangitananda, “Om Shanti,” I asked myself if Alice was the voice singing. I second guessed myself, I was slightly confused, but her honey dipped, alto voice sounded like her face, her demeanor. Obviously, because of my young age, I’ve never had the pleasure to meet or see Alice Coltrane Turiyasangitananda perform live, but her presence, her music and style has been with me for some time, and the voice seemed to fit. Upon reading the background on the album on Luaka Bop’s website, my question was answered: this is the first collection of recordings that features Alice’s voice. Fascinating.

There are a few other reasons why this album is far out … or stands out from every album she’s ever put out: this record doesn’t exhibit upright bass, harp or piano as the lead instrument. The Ecstatic Music of Alice Coltrane Turiyasangitanandais intense, looped, and electro acoustic. The album is psychedelic and heavily layered. I can imagine Coltrane Turiyasangitananda sitting in the studio doing take after take of her voice to layer upon itself over and over, creating her own vocal choir. That’s the impression I got from the opening track, “Om Rama,” which moves from a chorus of women’s voices into a The Doors-like overture of electronically treated organs to a man’s gospel solo to end the song. It’s like nothing I’ve ever heard before, but I wasn’t confused by it. This music sounds like Alice being free, excited, playful and unstructured. It’s not a separation, but more of a side of her we’ve never heard.

I would call this album, a psychedelic global gospel album. She does everything she seems to have never gotten to do because of her rigid record labels. These songs may have been recorded on her own terms and on her own turf. Baker Bigsby oversaw the recordings of the songs from the 80s and 90s and the original recordings for mastering as The Ecstatic Music’s songs were compiled from four cassette tapes of music recording between 1982 and 1995. And I know for a fact that his album was prepped and released with care as I’ve studied the emergence of this album and spoke with her protege, Surya Botofasina who told me about how he made sure the label’s intentions were in the right place, and that the permissions were given by Alice’s children who helped uncover the recordings during the inception of this release.

The third track “Rama Rama” opens with the sitar and a short presence of a siren-like organ that opens the song. Coltrane Turiyasangitananda’s voice comes in with a welcoming calmness, her voice balances her unorthodox musical experimentation with vulnerability and spirituality. You will likely experience a slight transcendental shift while listening to this record. I think that is the point of this album.

Even though it is profound and listenable as a general piece of music, it’s all about how the record makes you feel. There are moments that will make you feel like your entire body is buzzing, there are moments when the mantras and Alice’s voice will make you daze off and forget about the cares of this realm. In speaking with those close to her, that’s what Alice’s spiritual intention and purpose was: to incorporate her spiritual influence and her ability to make a positive change in someone’s life and demeanor in the name of Hindu enlightenment through sound.

On the eighth track of this ten-song collection, “Keshava Murahara,” she sings to Ram peacefully, singing a prayer with softness and understanding, instrumentally accompanied by a whisper of a sitar and organ. This album is about Alice’s voice and her personal prayers. If you thought you knew her, and contrarily, even if you believe you never quite understood her larger-than-life soul, you’ll understand her now. Alice Coltrane Turiyasangitananda was a praying woman, and on this album, you get to know her conversations with God.