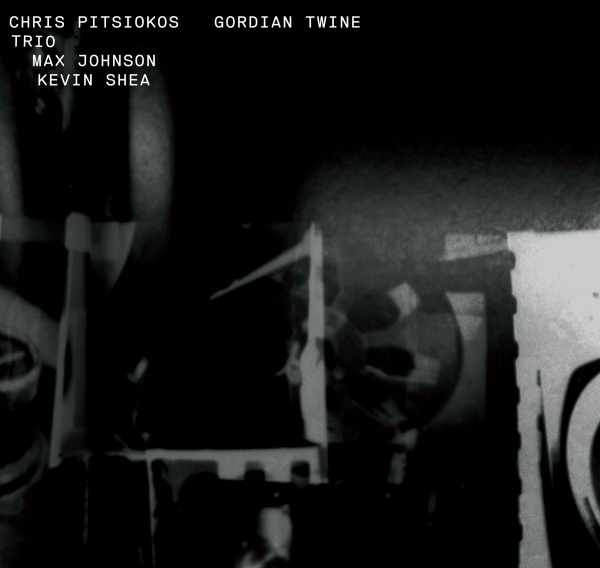 Gordion Twine is a superb record featuring three fascinating, young artists. Chris Pitsiokos[pit-see-OH-kos] is one of the most promising and innovative alto players so far to emerge from the millennial generation. His crisp, lightning-fast articulation shows that he has done the legwork to hone his technique, but his music also displays a great degree of narrative maturity and he provides a transformational journey for his listeners. Pitsiokos has chosen here Max Johnson (bass) and Kevin Shea (drums) as his band mates. Johnson, who like Pitsiokos is in his mid-twenties, is a surprisingly versatile player who has already released six recordings as a leader and has performed in a range of contexts from within the jazz tradition to headbanging explosive avant metal with the likes of drummer Weasel Walter. Shea bears some rock influence, though his involvement with groups like Talibam!, Mostly Other People Do the Killing, and People, show that there is no category which easily applies to his artistic work.

The record opens with one of its strongest pieces. “Prologue,” which seems to be a bit more than the humble title might suggest, yet introduces the listener to a lot of ideas the band explores in greater detail later. Rhythmic maelstroms, sometimes set in motion by themselves, at other times twisting in tornado-like fashion around Pitsiokos’ searing alto, give this record a textural and narrative depth throughout. Ascending from fierce attacks into microtones, Pitsiokos commands the reins while rhythms simmer and explode around him.

“Lethe” is a magnificent exploration of space. All three players make sharp and sudden entrances, accentuated by the booming silence in which they are enveloped. “Clotho” evolves nicely. It opens with a rhythm duet that eventually builds from its disparate pieces into a driving melodic exploration. “Lachesis” serves as a foil to the rollicking, fierce playing of the rest of the record. Johnson opens the piece with a well-articulated bass solo, then Pitsiokos adds sparing, often classically beautiful lines that together make this the most vulnerable expression on the record.

“Atropos” takes off with rhythms forming and breaking around crisp searing alto. Then a rhythm duet features Johnson boldly leading with Shea providing the accents until they are rejoined by Pitsiokos and drive to a definitive conclusion. “Epilogue” brings this record to a fitting end. Rhythms bloom and fade across the landscape of the piece with alto moving through sometimes in a direct manner, at other times tinged with a mournful quality.

This record is worthy of considerable attention for its technical brilliance and its compelling narrative. It’s also a pleasure to hear, displays a broad emotional range, and is a bold statement. One of the reasons for its success is that it was recorded live, thus capturing the immediacy and the energy only possible in the live setting. For this band, that was the right choice, since a studio recording may have seemed staid by contrast. It would be unsurprising to see this on a lot of best-of-2015 lists later this year.