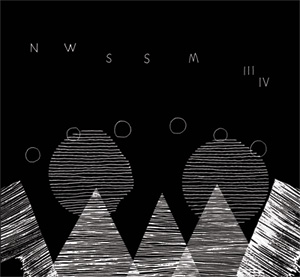 Pleasure of the Text (CD)

This record is one of the true masterpieces of the new millennium. It contains two CDs, both recorded live at Issue Project Room (Brooklyn), the first on March 11, 2011, and the second on June 6, 2013. Led by the visionary trumpet player, Nate Wooley, Seven Storey Mountainis otherworldly music that is stunning in its intent, transcendent as it is experienced, and enduring in its impact. Wooley, who is regarded as one of the key figures in a generation of great trumpet talent, displays on this two-disc release that he is also both an accomplished composer and an aesthetic visionary. Each CD contains one extended track of just over 40 minutes in length.

Bold vibraphones announce the opening of the first CD, and the music just builds from there. Drone trumpet and violin eventually emerge, resonating and pulsating, at times breathing in rhythm, until a shift down to solo violin over low rumbling drums. At the 15 minute mark, the music really begins to take shape again with drones emerging with increasingly active drums. Guitar adds to the growing frenzy of drones and shifting slow melodies over fascinating percussion work that is sustained for nearly ten minutes. Ecstatic playing, rich with texture, manages to meld voices together while retaining a measure of individuality. The first piece patiently evolves, gradually taking on new shapes. At about 31 minutes, the music finally begins to simmer, with a return of vibraphones signalling a more contemplative turn over continued drones. Then, as the piece began, it ends with solitary vibes bringing the track to rest.

The second disc is even more moving. The music begins with drummers Chris Corsano and Ryan Sawyer lightly using brushes as if to breathe life into the silence. All else is still. Then the two vibraphonists Chris Dingman and Matt Moran meld with the other percussionists adding heart beats of vitality to a growing musical organism. Then electronicist Ben Vida and violinist C. Spencer Yeh fold texture and shape into the sound, still growing, evolving, transforming. From this world of music set in motion, Wooley’s trumpet emerges in breaths, amplified so that even the movement of keys produces rhythmic pulses. Wooley’s lines are sometimes barely audible in their gentleness, but gradually crescendo towards the apex as he employs a variety of techniques including vocalization. The TILT Brass Sextet, composed of three trumpets and three trombones, join this breathing, pulsing, visceral experience adding their voices, like an angelic chorus, from which Wooley soars to profound heights in soulful elation, bold cries, and tender resonances over the rolling thunder of percussion. The piece, truly a stunning accomplishment, plays as if Wooley has opened a portal from our existence into another world, one that we get to glimpse momentarily in flashes throughout the piece, and then, finally this vital life beat recedes from our view.

I had the pleasure of attending the recording of the second performance and it was a truly transformational experience for me. It put me into an alternate consciousness for days after as I swam back through the music over and over again in my head. That once-in-a-lifetime experience (as is the custom, Seven Storey Mountain only performs each piece once live) nevertheless had a lasting impact. Even now, some two years removed from the concert, the music lives within me and I often recall it, when in a moment of contemplation, I replay Wooley sitting solemnly on stage, his band set behind him in relative symmetry, facing their collective center. With the angelic chorus booming, Wooley cuts across the dark with brilliant flashes, the herald of a deep, spiritual longing.

The music on these CDs can, of course, be listened to anywhere, but they are best experienced in an environment where the listener allows it to be an all-encompassing experience. Pull down the shades, turn off your cell phone, prevent other distractions, and find a comfortable place to sit or lie down. Then let the sounds wash over you. The first disc is the more physically stimulating of the two–the 41 minutes of music in some ways feels like one big inhale and exhale. A slow, patient, gradual rise from the outer silence all the way up to triumphant peaks and then eventually back down. The second disc is more subtle and profound in that it engages with deeper emotions by presenting a wavering, vulnerable, accessible, human voice at the center–a solitude in the multitude. Wooley’s artistic vision is compelling and he continues to be one of the most profound and innovative performers in New York.

Joined by the Tilt Brass Sextet: