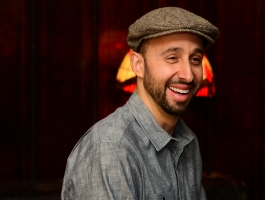 Fresh off a cracking European tour, drummer and composer Harris Eisenstadt‘s Canada Day will unveil its latest music at Greenwich House Music School this coming Thursday, December 11, at 8 pm. The performance is also a lead-up to a January recording session for the band’s fourth record. In an age in which few bands record more than one or two releases, Canada Day has developed an impeccable reputation with three innovative releases since 2009. Eisenstadt will be supported by the all-star cast of Nate Wooley (trumpet), Matt Bauder (tenor saxophone), Chris Dingman (vibraphone), and Eivind Opsvik (bass).

Cisco Bradley: What is your vision for the next Canada Day record?

Harris Eisenstadt: The process of documenting each Canada Day record has been to rehearse and perform new material in town and on the road for about a year, then hit the studio. As everyone’s schedules have gotten increasingly busy, this process has become more and more streamlined, to the point that we rarely play in New York these days. So the plan for the next Canada Day record is to go in to the studio January 25 (after an Ibeam residency January 23–24) to document the music we started working on in May 2014. We used that four-night residency at Douglass Street Music Collective to start getting this book together. Then we toured Europe this past November 2014 and refined the music further. The pieces by now are pretty internalized, so the concert December 11 at Greenwich House will reflect that. And the Ibeam residency next month gives us the opportunity to refine the music even further before documenting it.

CB: Your next release will be the fourth Canada Day release since 2009. You have clearly covered a lot of ground. What can you say about the band’s progress to date? What do you see as the next step in the ensemble’s progress?

HE: Each book of songs that we’ve recorded has reflected where I was at compositionally the year or so that preceded the recording session.  The music for the first Canada Day (Clean Feed) record sounds like me learning how to write for the band. I wrote the book for Canada Day II (Songlines) when our son was just born; I was pretty exhausted and sentimental, and the music kind of sounds like that. The book for Canada Day III (Songlines) was a sort of a return to… if not overtly complex forms, more involved, multi-part structures. We also had the opportunity to record an expanded octet version of Canada Day for 482 Music around the same time as we recorded Canada Day III. For the octet project I wrote a suite of four pieces that really tried to exploit all the voices and options – kind of a little big band approach. III and Octet were recorded late 2012 and came out in 2013, then the band was pretty much on hiatus for a year. In addition to working on other projects, I spent that time writing the Canada Day IV book. The music for Canada Day IV , also to be recorded for Songlines, is a departure from earlier records in one very fundamental way. In addition to exploring some similar compositional areas (expanding/exploding vamps, multi-part mini-suites in which earlier thematic materials don’t necessarily return at the end), I composed short duo pieces for tenor/vibraphone, trumpet/vibraphone, and bass/vibraphone, and placed them each within the larger quintet structures. So the sonic result for this record will be a more varied timbral landscape in a sense: unaccompanied solos, duos and trios within the full ensemble. In a sense, rather than trying to make a quintet sound larger than it is (the impetus for the octet project), I’ve tried to make a quintet be able to sound more kaleidoscopic this time around, by highlighting the smaller instrumental combinations available within the group. The recording will be released in time for my 40th birthday residency at the Stone September 1-6 2015 (Canada Day plays September 3-4 – the 4th is my birthday) and Canada Day’s early October 2015 Europe tour (dates confirmed so far in Romania, Norway; more to be announced).

CB: What possibilities are opened up by the addition of Pascal Niggenkemper on bass?

HE: Eivind Opsvik was the original bass player in Canada Day, and recorded on the first two albums. When he wasn’t available for a tour in 2012, Garth Stevenson stepped in and did a fantastic job. Garth ended up recording Canada Day III and Octet and did several tours with us. When he moved to western Massachusetts last year and there was a residency at Douglass Street on the books that he couldn’t make, I had to find someone in town who would be the right fit. Eivind had commitments at the time, so I brought Pascal Niggenkemper in, who I’d played with in Larry Ochs’ band. The music immediately took off with Pascal. As the dates settled for our November 2014 tour, Pascal was unable to make the whole tour due to previous commitments. Luckily, Eivind and I had a gig with the Nate Wooley Quintet at a festival in Poland the day before Canada Day’s tour started, so Eivind was able to stay on in Europe do the tour with us.  Eivind is on the December 11 Greenwich House concert, than Pascal will be back with us for the Ibeam residency and Canada Day IV recording session in January.

CB: What can you share about the inspiration and ideas behind the song titles for Canada Day IV?

HE: I was enamored with Richard Ford’s novel Canada last year while writing the book for Canada Day IV, and found myself jotting down some of his beautiful sentences here and there to save for song titles. One particular passage that stuck was: “I read that the great critic Ruskin wrote that composition is the arrangement of unequal things. Which means that it’s for the composer to determine what’s equal to what, and what matters more and what can be set to the side of life’s hurtling passage onward.” I borrowed four song tiles from this one sentence! “The Arrangement of Unequal Things” actually ended up as the first song on Golden State II (coming March 2015 on Songlines).  “What’s Equal to What,” “What Can be Set to the Side” and “Life’s Hurtling Passage Onward” are all tunes in the IV book. Another song is called Meli Melo, which is the French name for a Canadian snack (English name: “Bits and Bites”) that I remember from growing up. As mentioned, I wrote three duo pieces that fit inside the larger structures. These three, along with the other half of Meli Melo, originally had Bits and Bites 1-4 as working titles. When I ended up putting two of them together as one piece, for some reason it reminded me of this snack from when I was a kid, which was essentially a mix of super-salty pretzels, shreddies (kind of a Canadian version of Chex cereal), peanuts and something else (can’t remember exactly). High concept, let me tell you. The final three tunes in the book were named at various points during the particularly brutal 2013-14 winter. Sometimes It’s Hard to Get Dressed in the Morning and Let’s Say it Comes in Waves are both essentially dedicated to our five-year old son. Let’s just say that their titles (and the music materials therein) are much less sentimental than some of the music from Canada Day II. After Several Snowstorms pretty much speaks for itself.

CB: What is it about the improvisation styles of each of the musicians in Canada Day that gives the group its cohesive sound?

HE: Each musician’s improvisational style is vital, of course, but ultimately there has to be an intangible simpatico that somehow clicks. Some projects gel and some don’t, regardless of how unique each improviser is and how well-thought out the mix of personalities (musical and otherwise) is. In the case of Canada Day, as soon as I heard Nate and Matt together I knew I’d found the right so-called front line. I’ve spoken in interviews before about how they each have the kind of total approach that I really value: personal and complete mastery of conventional and unconventional techniques plus immediately recognizable sounds. In my band and in Matt’s quintet (and in other projects over the years) they have had extensive opportunities to play together, and this is clearly audible in how they phrase together, push each other, complement one another. I met Chris while we both lived in Los Angeles around 2003, and we both moved back to New York around the same time (2005-2006). I knew I wanted vibraphone as a chordal instrument in Caanda Day, and I’d been deeply impressed with Chris’ musicality and unique voice when we worked together in Adam Rudolph’s large ensemble and on my 2006 re-imagining of Wayne Shorter’s The All Seeing Eye + Octets for the LA (mostly) hip-hop label Poo-bah. There’s a fleetness in Chris’ playing that I love; not only in terms of fast, fluid lines and a virtuosic rhythmic sensibility, but a fleet sense of architectural framing. I like to give him melodies, harmonies and rhythms, of course, but I also love to set him loose on a structure and know that he will shape what’s going on meaningfully and artfully, every time. Whether it’s been Eivind Opsvik, Garth Stevenson, or Pascal Niggenkemper, the role of the bass player in Canada Day has always been to deal with the written materials in fixed and flexible ways. Each of these exceptional bassists are masters of interpolation; they take the sometimes-skeletal, sometimes-detailed materials and make more of them than what is on the page.