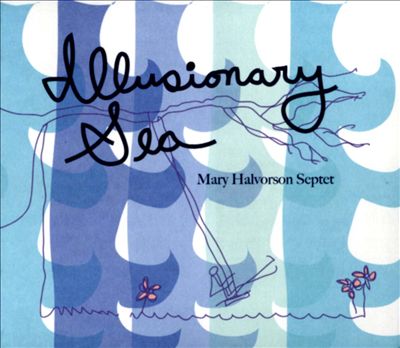 This album, the latest from leader Mary Halvorson, is a further extension of her abilities and vocabulary as a composer and performer. The band, now expanded to a septet, features the additions of Jacob Garchik and Ingrid Laubrock to her quintet lineup of Jonathan Finlayson, Jon Irabagon, John Hebert, and Ches Smith. Laubrock has exploded onto the scene since moving to Brooklyn from London only a few years ago; Garchik is a very versatile player comfortable in many settings. Intended to take on a “mini-big band feel,” the music bears the hallmarks of Halvorson’s style: intricate architectures of new sound placed in an M.C. Escher-like dimensional plane in which profound structures are made to bend, move, or transform while moving in multiple directions at the same time. We are swept along for a journey that blends known and unknown. This album may cover less distance than her previous albums (Dragon’s Head, 2008; Saturn Sings, 2010; Bending Bridges, 2012), but affords us a deeper experience with what we encounter.

Halvorson demonstrates that cutting edge music can be both highly structured and composed, while also being exploratory and filled with avant elements. The structures help orient the listener, pointing along a trajectory, but as the music unfolds, the three dimensional space with which we are accustomed gets challenged to various degrees. The levels of cohesion vary in the songs contained on this album, never fully pulled apart, on the one hand, and never reduced entirely to uniformity, on the other. Rather, Halvorson’s musical universe expands and contracts around interrelated ideas, rhythms, melodies, and sounds, that vie for our attention. The title of her last album, Bending Bridges, identified the malleable structures with which she grappled. On this record, reference to the sea is fitting and the music contained within, more fluid with the additional horns. The illusion which manifests in different ways throughout the record, is powerful and transformational, challenging the capacity of our senses to absorb not only the myriad individual moving parts, but to be conscious of the entirety of the experience.

The first two tracks announce the new members of the band. From the opening notes of “Illusionary Sea (no. 33),” Garchik sets the tone for the album with his fluid, somber sound. His delivery is flawless as he solos and carries on sophisticated interactions with the leader over rhythm that eventually shifts into a drum solo by Smith. The song has a woven feel, unveiling the various contributors patiently. “Smiles of Great Men (no. 34)” then sets off in a different direction, juxtaposing the sublime opening now with a decisive, driven piece. Halvorson directs this piece with her opening lines, very horizontal in their trajectory, while Finlayson presents an alternative throughout the first half of the piece. Their interplay is fascinating in that it challenges the listener to consider each player individually as well as the space between. Consider two dart boards set up next to one another, beckoning the ear to each individual bullseye, while at the same time presenting an intangible, yet unavoidable new center of focus. Laubrock emerges midway through the piece with a solo that is fairly tender, while bearing its teeth in successive turns over propulsive textures and rhythms.

If by the third track, we somehow think we have gotten a sense of the personality of this album, we are again surprised. “Red Sky Still Sea (no. 31),” the longest song on the album, sets off in a new direction, revealing yet another frontier of Halvorson’s imagination. Hebert opens with a sparse, thoughtful solo, and then is joined by the full band. The track illustrates the a shimmering stillness hinted at by the title, with occasional percussive accents. The song has the pace of a ballad, but the harmonies give it a late-night, almost mournful feel. Muted trumpet over trombone and rhythm (including guitar) directs the forward movement of this contemplative piece, eventually fading into quietude.

The album fully takes shape with tracks four and five. “Four Pages of Robots (no. 30)” unfolds like a woven tapestry, exhibiting some of the most sophisticated trans-dimensional architecture of the entire album. The musicians take turns in maintaining the multifaceted center, while it seems to move in more than one direction at the same time. Occasionally, it reorients itself, then we set out again, refreshed. “Fourth Dimensional Confession (no. 41)” brings the ideas introduced in the preceding track to full fruition. Trumpet over trombone are soon joined by the full band. While bass, drums, and guitar create vertical textures, again Finlayson presents the foil to uniformity, leading the piece into an unexpected place: some manner of reconciliation of the variant pathways that eventually meld into mellow cohesion that emits a closing solo by Halvorson that is diffuse, yet conclusive.

The two closing tracks bring the listener back to center. “Butterfly Orbit (no. 32)” serves as a reunion of individual voices into a joint effort. “Nairam,” meanwhile, features contemplative trumpet playing over a meditative pulse of other horns and rhythm.

The core of this band still rests on the original trio–their common language by this time deeply shared. Hebert, one of the most active bassists of his generation, and Smith, who is constantly inventive and unpredictable, are a perfect match for Halvorson, who constantly challenges her musicians to develop further. But the expanded group offers a whole new set of opportunities for interaction and exploration. Irabagon and Laubrock are comfortable in this setting, providing solos that fit well with the overall mood of the songs. Both also are also unsung heroes, making subtle contributions all through the music, fleshing it out. Garchik and Finlayson are boldly featured here and make their mark quite visibly in shaping melodies and structures. Four horns give hints of a big band sound, but also add color to Halvorson’s expanding palate with which she has again employed to set forward-looking, cutting edge music in motion.