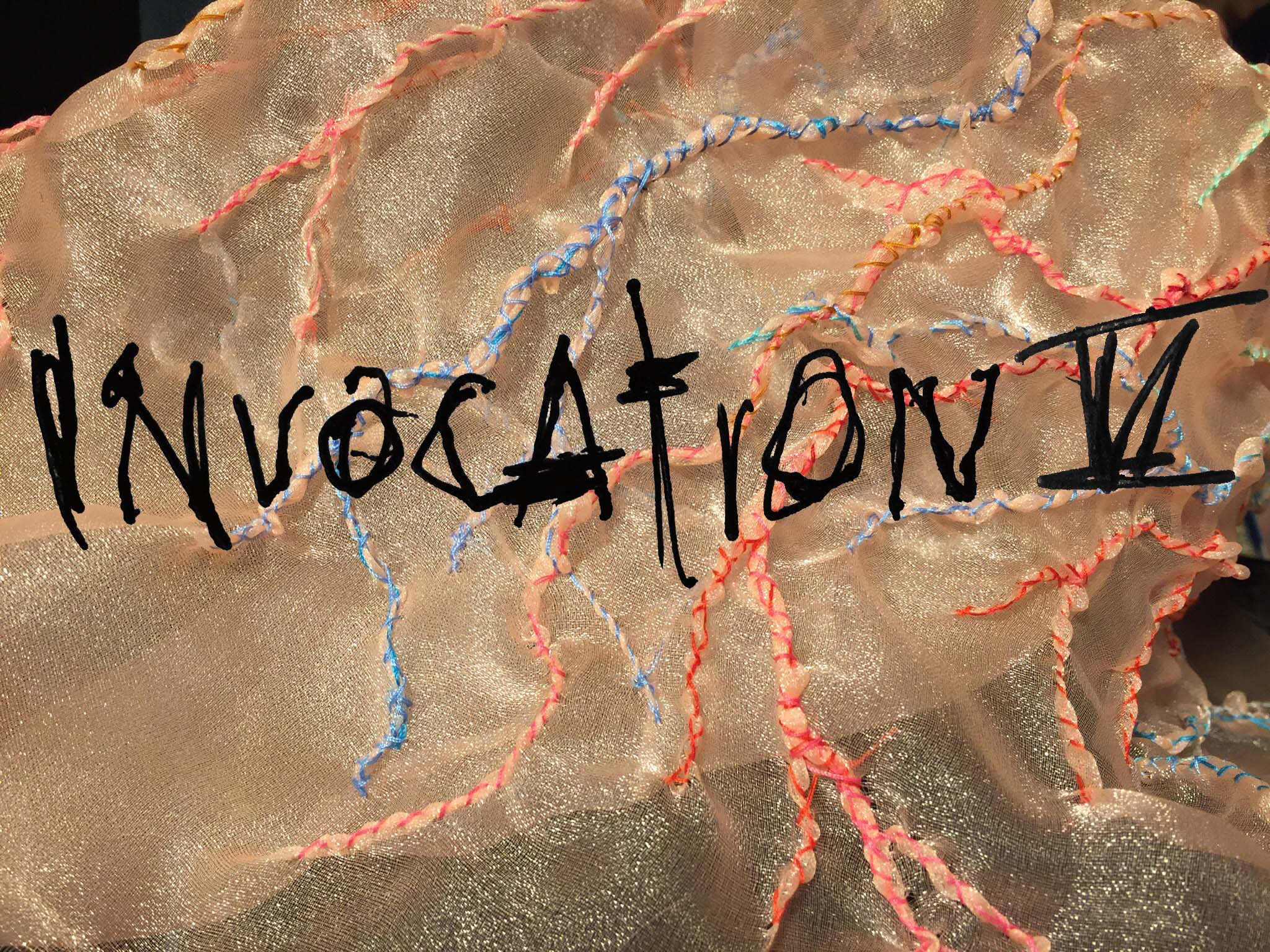 This is an interview I conducted with Eli Wallace and Drew Wesely about the series they have been co-curating in Brooklyn. The next show is tonight at Mirror Woods at 8 pm!

1) What are the artistic elements that you are attempting to draw together with the Invocation series?

DW: The idea for Invocation came from, first and foremost, wanting to bring people together to share an experience that transcends daily life or even a typical show/concert situation. Each iteration pairs an installation artist with durational musical performances (usually improvised) to create an immersive environment where metaphysical catharsis and healing are possible. We wanted to create a space where audience/performer divisions are obliterated both conceptually and physically. Coming to Invocation means entering into a highly symbolic space where the senses are engaged in a total, ritualized way very much in the spirit of how artistic practice exists in the tribal context as opposed to the bifurcated reality of western modernity (hence the name). Another important aspect of Invocation, to that point, is the sense of community created through sharing this experience with others. One of the important anthropological functions of ritual practice is the establishment of mutual shared values which are tacitly experienced on a deep vibrational level even by simply sharing a space with others, even if they’re complete strangers. To add on to that, the fact that each iteration is a completely unique program (installations are created specifically for each performance and performances are usually completely improvised) creates a highly rarefied environment and a sense of reverence and sacredness which can have very deep spiritual effects.

EW: Yes, Drew came up with the idea and approached me about it, to collaborate together as co-curators. I was drawn to the concepts that Drew already mentioned and jumped on board. While initially I felt I was assisting Drew with a concept he had already crystallized, now I feel we are contributing equally. The series centers around creating a space for an immersive experience to occur. As curators the goal is to bring certain musicians and artists together, allowing them to interact with each other and the performance space in a way that is most comfortable and genuine to their work. We’re trying to create a unique experience, one that holds a performative energy for the given duration of the evening, as opposed to different isolated sets of music, dance, visuals, or spoken word. As an audience member enters the space they become active participants in the experience. They confront sights, sounds, movement, and placement on a personal level and in connection with the other audience members and artists. The installations have and will include artists of various disciplines, whereas the musicians’ work has centered around improvisation for the most part. In bringing these variegated artistic mediums together, a primary element that fascinates me is indeterminacy, and in what part of the process this comes into play. Artists bring their work to the table, and we put the show together accordingly: for some shows we didn’t have an order for which musician was to begin, some musicians presented mostly composed works, some transitions were left completely to chance, others were rehearsed and hashed out. Thus, indeterminacy or determinancy can occur on many different levels in preparation, in performance, and in terms of audience interaction. Lastly, we wish to purposely blur or disintegrate the dividing line between audience and performer through allowing attendees to stand, sit in chairs spread in different places of the space, sit on pillows, lie down, or however they would like to engage in the experience.

DW: Totally. Eli and I have been close musical collaborators going on about two years at this point. We hit it off immediately and have been involved in lots of projects together since. Because of this deep level of trust and a lot of shared aesthetic goals I knew we would be totally on the same page for this series and he has contributed a lot to its vision. One more thing I think is important to mention is that all artists are highly involved in building the night in a way that allows their work to speak fully in the context of everything else going on. We are very specific about who we choose to pair together but once the process is set in motion everyone is a curator. We see our role as facilitating these conversations and throwing around ideas along the way but ultimately it’s up to the performers to shape the evening in a way they feel comfortable with. It’s truly a beautiful thing to see how people’s personalities and personal working practices map on to everyone else’s to create something truly unique. This is an important factor in terms of which elements on a particular evening are left indeterminate.

EW: Haha, yes for sure, agreed! I was honored that Drew asked me to collaborate with him on this series, and we’ve worked together on many projects at this point so it’s been a really fun and natural transition to work on Invocation together. This series involves constant thought, conversation, and work. Many of our shared musical aesthetics that we discovered and honed together are now manifested in a much broader lens through the series. Each show we’ve done so far has been transformative in some regards to me personally, and I hope that audience members who have attended feel similarly. The idea of facilitator resonates with me as well: ideally Drew and I want to create an engaging and inspiring space for artists to operate, letting their ideas and work be the driving force behind each show. We pair people together and create a space for the show to occur, but really we want the artist’s expression to be the most important factor. When I say each show has been transformative for me personally, that’s what I’m getting at, that our role as facilitators has been achieved and I’ve been able to step back and enjoy the work of each individual artist within this unique context and space that we’ve created.

2) How often will the series occur and where?

EW: The series occurs once a month on the last Friday of every month (except for the rare occasion when scheduling concerns force us to move it back a week) at Mirror in the Woods in Gowanus, 8pm.

3) What considerations did you make as you curated Invocation IV?

EW: With each event the priority is to create an immersive experience, one that is hopefully transformative for the artists and the audience. Therefore, the primary concern is what artists will work well together artistically and personally. We’re very specific about choosing musicians that will sonically fit with whatever visual installation artist we have chosen and vice versa. In other words it’s not random at all but discussed in depth. Each show is different as we have to build it around who we’ve chosen so the process is altered each time. But often we’ll start with one artist (either visual or musical) and build it from there. Ideally, a situation is created where all artists are feeding off of each other, influencing the work that they create either in preparation for the event or on the night of the concert. It’s also essential that all artists feel comfortable with the collaborative and immersive process, and feel that their work can genuinely fit into the experiential environment that we’re creating. So, discussions take place beforehand to ensure that it will be an auspicious and beneficial situation for all involved. I think in curating this series it’s of utmost importance to be aware and sensitive to everyone’s needs, concerns and comfort levels in relation to the presentation of their work, and interaction with us and the other collaborating artists.

DW: There were a lot of things we decided early on practically to help facilitate the kinds of situations we wanted to create in the space. For example, we made it a goal to eliminate any physical hierarchy and spacial separation between performers and audience members so we have largely gotten rid of chairs in the space and encourage people to sit on pillows on the floor. We are also quite mindful in deciding how performers will be placed in relation to the installation piece and audience. Every evening is different and performers/audience alike are encouraged to move around the space throughout the evening and experience the sound/installation in their own way. Another important decision we made early on was to have the evening run continuously with no gaps in between sets. Either there is a determined/indeterminate transition between performers so there is no break in sound or, at the very least, there is no break in performativity. We make clear and encourage in our meetings with artists/musicians to really engage with the energy of the evening and allow the moment to dictate how the night unfolds. Lester St. Louis, for example, in our first iteration had some beautiful moments towards the end of his set where he started speaking in this narrative sort of way along with his playing. It was shocking in the best sort of way and that sort of thing gives everyone in the space permission to relate to what’s going on in a radically different way; that’s what we’re after here. People experience art and especially music through attention and awareness because the form of music is revealed temporally as opposed to an abstract painting where you can take in a general impression of the work in a matter of seconds. We want the experience of Invocation to be total and immersive and trance-like so these sort of considerations end up having a huge effect on the individual and collective experiences of the evening.

EW: Absolutely! I’d like to briefly add that because of these considerations every audience members’ perception is necessarily different. What they choose to look at, listen to, and what speaks to them will be completely subjective to where they choose to view the performance, whether they move around, stay in one place, close their eyes, or focus on the visual installation. For example, during Invocation III with Ben Gerstein and Carlo Costa there were two video projections taking place on opposite sides of the space. One had to choose which video they wanted to view. Personally, this idea of altered perception is particularly influenced by optical artists such as Jesús Rafael Soto. Many of his pieces are three dimensional and change significantly as the viewer moves in relation to them, transforming the viewers perception. This directly ties into how we choose to document the series. Instead of posting videos of the entire evening after performances, the extremely talented Kenneth Jimenez (who is a crucial part of this series) records and videotapes every show. Thereafter he creatively edits the material into short videos that are essentially a brief synopsis of his personal glimpse into the evening. We believe to truly experience these performances one must attend in person, but these short videos serve to provide a documentation of the series and allow Kenneth to artistically express his perception of the performances.