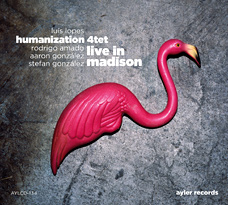 Breaking from my usual format, which is focused on musicians active on the contemporary New York scene, I jumped at the opportunity to review an album recorded live in Madison, a city that served as my home for many years before moving to Brooklyn. The album, by the Humanization 4tet, features Portuguese guitarist Luis Lopes leading a band with Rodrigo Amado (tenor saxophone), Aaron Gonzalez (bass), and Stefan Gonzalez (drums). This is the band’s third official release, following a self-titled album (Clean Feed, 2008) and Electricity (Ayler, 2010).

Madison is not a city with a particularly active jazz or avant music scene, but as it is teeming with thousands of students, there is always a hunger for new sounds and daring art. A surprising number of bands have recorded while passing through Madison, such as Nirvana and Garbage, and adventurous labels such as Utech(based in nearby Milwaukee) further enhance the music scene. A great deal of activity also occurs on the live scene or through an underground network of house concerts. I remember hosting my own as a college student in the basement of a house on St. James Court. The city is also blessed with dedicated record stores that have persisted and even flourished in the era of downloadable music, the most spectacular being Strictly Discs on Monroe Street. It was into this environment that Luis Lopes led his band, surrounded by eager students enthralled by the freshness of the band’s sound. The recording was done live, engineered by Audio for the Arts and has some nice photos that further illustrate the atmosphere of the live performance.

The record opens with “Bush Baby,” a tune with a funky feel to it driven by the robust tenor of Amado over guitar and rhythm. Lopes shows multiple faces in his playing, moving from fluid lines to crisp, delicate deliveries. The song possesses some great narrative tension instilled in the improvised interactions between tenor and guitar, positioned above the steady propulsion of drums and bass. Amado really  shines in his solo moments, as does Lopes, in turn. In the later moments, the two lead instruments construct an enticing jagged ambiance that simmers over rhythmic energy.

The following two songs, “Jungle Gymnastics” and “Long March for Frida Kahlo” reveal very different moods from the band. The first of the two features energized group interaction with all four musicians contributing to the conversation. The rhythm is far freer than on the opening track and oscillates beneath Amado’s burning melodic cuts, often producing a dense, complex mix. The following tune, the longest on the record, is pared down compared to the others on the record, with tenor and guitar, successively, out front again over shifting rhythms. But here were get to hear each individual voice in greater clarity.

“Big Love” opens with a unison melody of guitar and tenor over sparkling rhythm that showcases yet another feel for the band. Perhaps the greatest beneficiary is Amado, who is given plenty of open space to develop his own expression, while at times the band again engages in dense interactions. Aaron Gonzalez also gets his greatest exposure on bass, with a long, sure-footed solo near the end of the piece.

While all of these tunes convey an energized, fun feeling, “Two Girls” is the most obvious tune that fits into this vein, and possesses a funky, yet catchy melody that slowly gets more abstract throughout the song. By 6:30, is has become fully deconstructed, but manages to reunite before concluding. Finally, “Dehumanization Blues” closes with a cutting tenor introduction, turbulent bass, and steady drums that builds to a unity at 2:29. From that momentary meeting place, Amado explodes out and leads along until Lopes begins adding crystalline accents, crackling above tenor and rhythm. Then the leader adds searing guitar lines that feed into a rolling drum solo towards an eventual conclusion.

Humanization 4tet thrives in the live setting and one can feel the connection that they build with their assembled crowd. For anyone interested in hearing cutting edge music, check out this album, the latest accomplishment by this remarkable quartet.