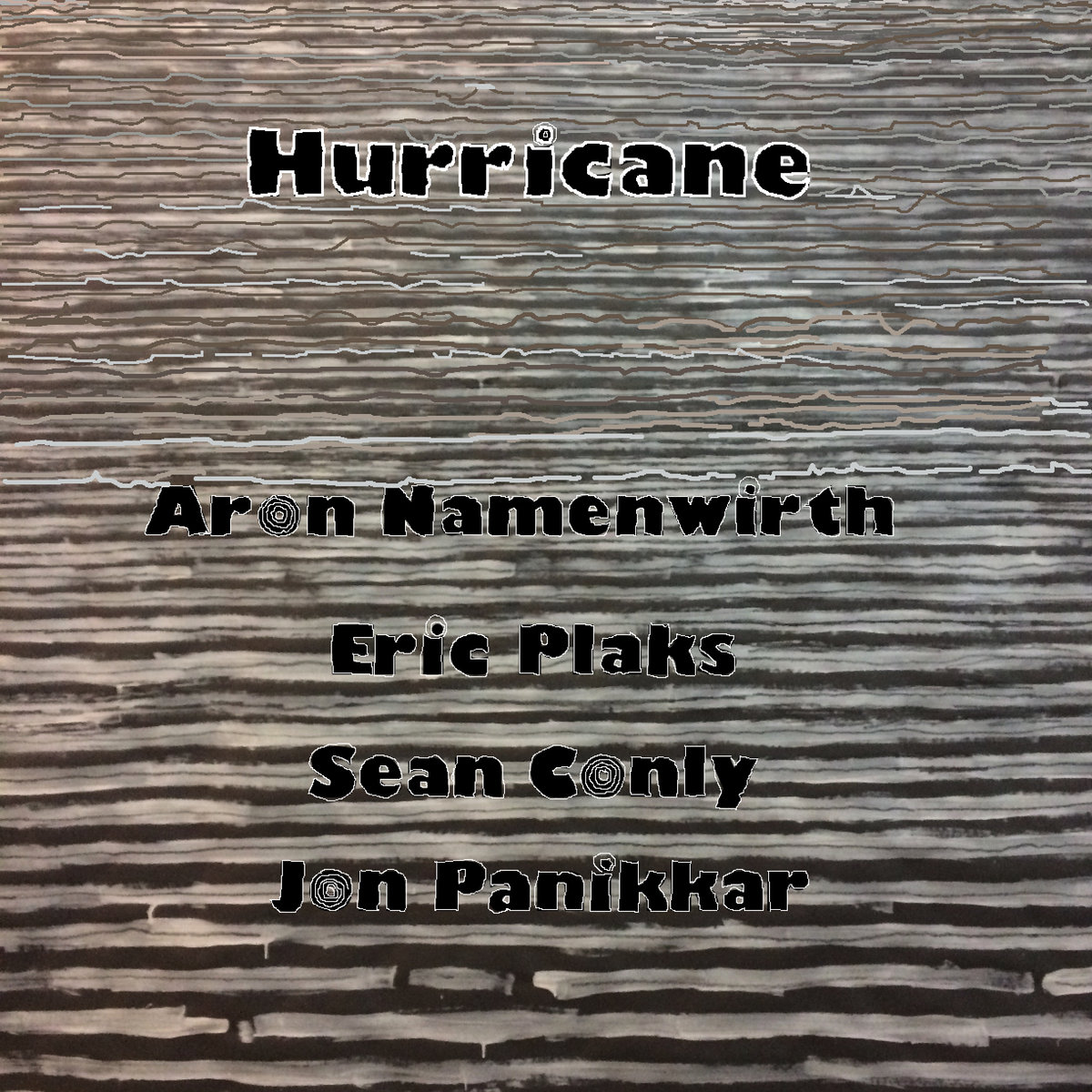 Aron Namenwirth’s Hurricane begins with a quiet storm gaining momentum. As sound unfolds the images on the album cover are imbued with meaning. The dark painted spirals suggest a kind of “fun house” trip to come; one where sounds bend and contort until traditional bass, percussion, and piano sounds abstractly familiar. The opening chord of “Bad News” lingers to introduce the following notes, stretching into each distinct sound.

Unlike my experience interacting with “The Quiet,” the third track is impatient and uncontrolled as each instrument follows its own path and collides with the others. Here, the listener steps into a scene of freedom and intensity . . . perfect for the unquiet mind in need of distraction. Sean Conly twists conventional bass sound to explore a new variety of tones. The strings sound as if they are undergoing synthesizing, adding a feeling of greater pressure to the tone of this track. This zone does not allow for us to lose focus, save for the bits of colors and images its sound conjures up. I quickly feel as if I am downstairs, below ground level, in a dark environment . . . the embodiment of a hectic city on a Friday or Saturday night seeking some version of solitude. I try to follow the keys Eric Plaks taps and am lost in their hurried and scattered movement. These artists are creating a zone free of restriction, and the notes they play, dancing freely in highs, lows, and anywhere in between make this audibly evident. Jon Panikkar stays consistent in affect (as with both Conly and Plaks) and carves out a unique space for the drumbeat. I am particularly drawn to Panikkar’s work in the opening of “Wicked Waves.” While he sounds as if he plays freely, there is a vague path I follow until screaming strings interrupt and divert my attention.

I appreciate “The Eye” in the middle of the album. Similar to the scent of coffee beans after taking in concentrated aromas, this track offers me a moment to reflect on what I’ve heard thus far while also allowing me the openness to the following, “Sublime Indiscrimination.” This sixth track takes the listener on a sensory ride. It is a lot at once. My head throbs from both sides and I don’t know whether to concentrate on my potential increase in pulse or follow each musician as he explores such a wide range of artistic territory. I am perhaps, almost overstimulated until the final notes come to a gradual halt.

By the time I reach “Deep Water Suffocation,” I feel the tone shift into a feeling of deep aggravation. There is angst in the air in the divergence of the instrument’s paths. Each sound moves into the other, slamming until the noise seems to shatter and the energy moves elsewhere. The title of the track inspires images of dark blues, chopping and slamming waves against each other. As I noted previously, there is yet another sensation of feeling pressure. The term “water suffocation” encompasses this. Just as sound enters from each direction and smothers me, I can easily draw comparisons to being stuck under water too deep to reach the surface; a space where panic turns in my stomach and inspires a quick response.

Hurricane reaches its conclusion at “Withdrawal”. The energy we follow through this electric album begins to fall and fade. This final song seems an appropriate place to leave the listener, as we reflect on our experience getting here.

The album was released in January of this year and is available on Bandcamp.