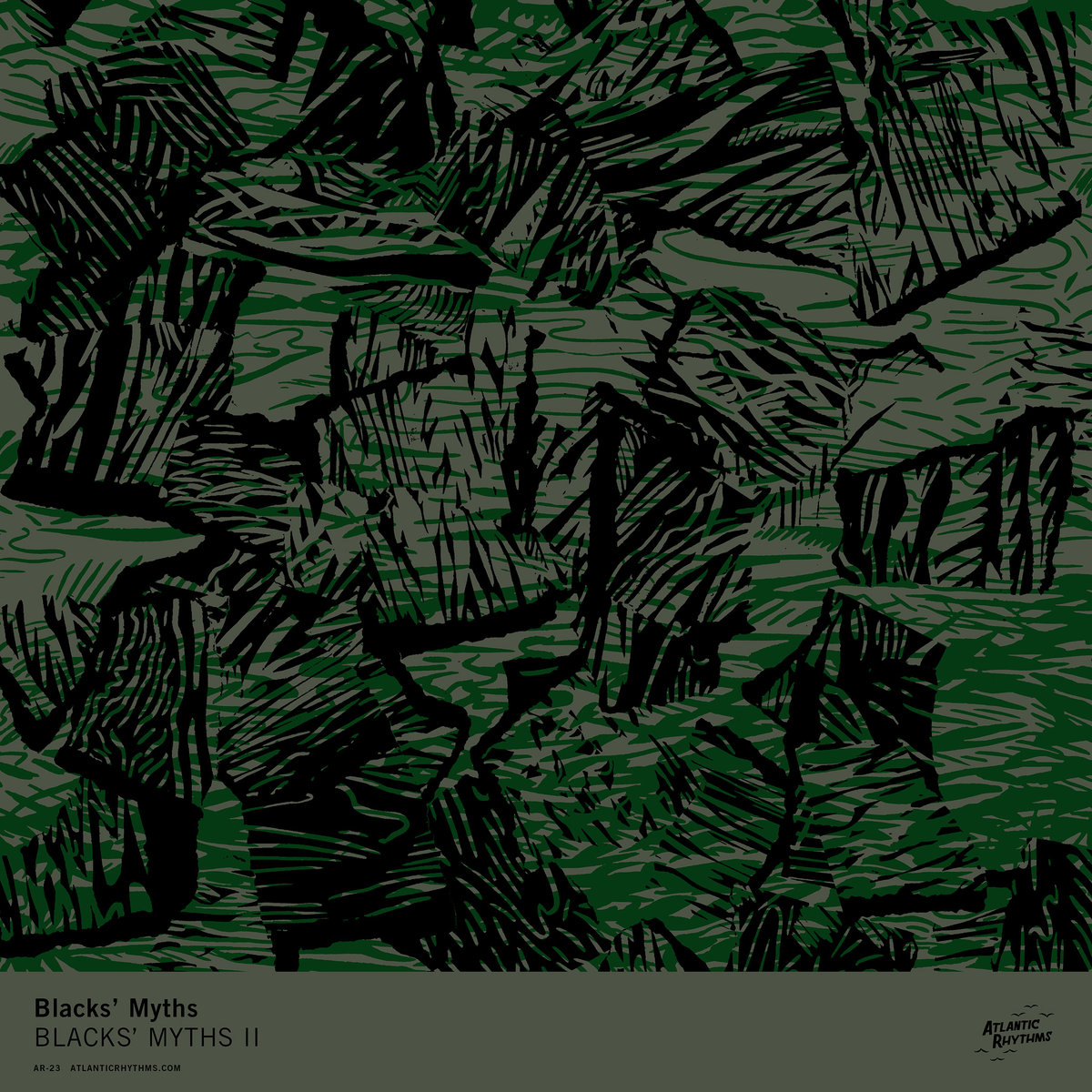 “We aim to destroy a history … that no longer serves a purpose.” – Blacks’ Myths

Black Expression is at the great place right now and even though all of it isn’t for me, it is amazing to examine all of these avenues open for creatives from the African Diaspora. Whether it is listening to Marc Bamuthi Joseph reading excerpts from Bassey Ikpi’s masterful I’m Telling The Truth, But I’m Lying (HarperCollins, 2019), the unearthing of Alice Coltrane’s sextet work via the unofficial Live at the Berkeley Community Theater 1972 (No Label, 2019), or partaking in the experience that is the New York Times’ The 1619 Project. I’d like to add to this short list hearing “the way beyond rhythm section” duo known as Blacks’ Myths (Luke Stewart and Warren G. “Trae” Crudup III) drop their second record.

Blacks’ Myths II is a continuation on the theme stated on 2018’s self-titled record (both on Atlantic Rhythms). When reminiscing on the first LP, the music and words reminded me a lot of my grandfather, while this project is very present… and even more urgent than its predecessor. Opening with “The Big House”, a strong voice speaks from the void. The recital, from which the above quote is taken, aligns itself with John Coltrane’s clarified buttering on Om (Impulse!, recorded in 1965/ released in 1967), but has an impact more cultural and political than spiritual. It quickly moves into “Rapture” as drummer Warren G. Crudup III’s snare hit gives way to a washing of Sonny Sharrock-like thrashing by bassist Luke Stewart. The downpour trickles into “No Escape” before revving right back up into the 7 minutes, beautifully fuzz themed “Stand Your Ground”. It sounds like there are vocals buried in the mix, or there is overdubbing, but either way, the ethereal nature of this first longer piece on the album works to haunting achievement.

Though the musicianship between the first and second album has remained topnotch, there is something that quickly stands out this time around. The group’s use of dynamics (distortion vs. cleaner sounds and quiet moments vs. louder) is definitely more significant. The droning on the intro and “Alter Destiny” prove that the music, though the experienced listener can pick up on the pattern, can move in any direction at a given time. Recitations also display not just the need for another vessel of message deliverance, but also the need to tackle their own feelings for the sake of marking individual and collective growth.

“Freeland” and “Mammy’s Revenge” are stripped-down instant jams. Stewart’s fuzz sounds super warm and Crudup’s groove keeping takes me back to the first time I heard some of those Miles Davis records featuring the great Pete Cosey. The buildup for “The Bluff” has a great dramatic effect. I’m not sure what pedal technique Stewart is using to achieve those higher frequencies, but it works well. Another great one is “Redbone” and thanks to god it is not a cover of Donald Glover’s hit (or its not recognizable if it is).

While “Northern Confederate” sounds like a B-side from Yasiin Bey’s Black Jack Johnson project (I’m totally into it), the rest of the LP flows to its own accord. The vocals are similar themselves to Stewart’s affiliation with Irreversible Entanglements, and though I can understand how Afro-futurism poetry and Africana historical contextualizing might not sit well with all listeners, they are still a crucial part of this group’s development and important to distinguishing the identities between them as performers and humans. I’m very glad that groups like Black Myths are around. Personally, it is not just unifying music amongst the Black Liberation Music community, but it also paints a beautiful picture of the future using images of pre-history.