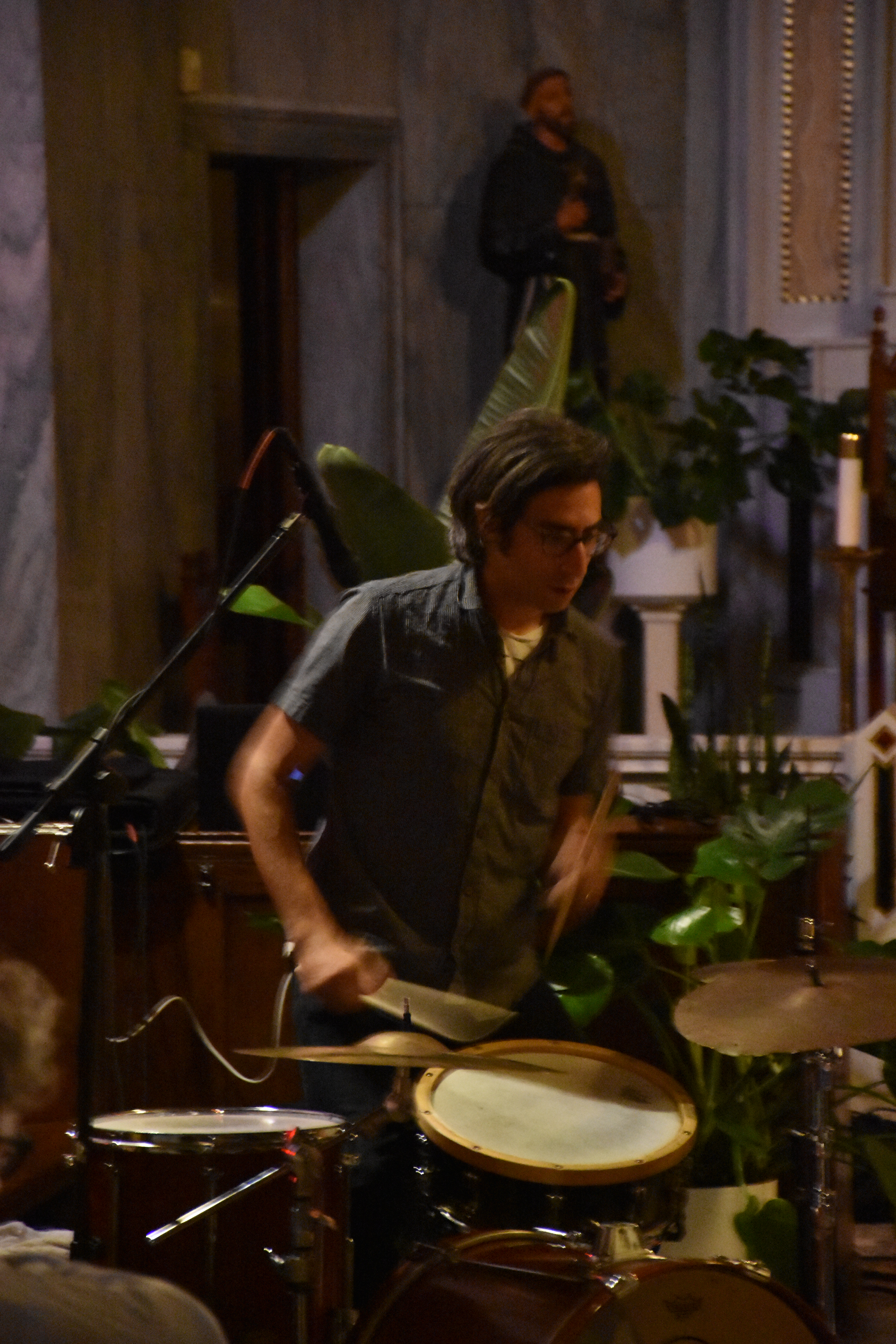 On Monday, August 20, drummer Brian Chase and harpist Zeena Parkins played a series of groundbreaking pieces at San Damiano Church in Williamsburg, Brooklyn. It was one of those electric New York evenings. When I arrived at the venue, there was a line outside of pensive audience members ready to experience something new and unexpected. We soon discovered that the concert had sold out; it was packed with standing room only, as the young crowd eagerly waited for the music to begin.

Each of the performers opened with a solo set, followed by a combined duo effort. Both had much to say and were effective in stretching the possibilities of their instruments and their sonic relationship with each other.

Chase opened the night with an exploratory piece in which he muted the snare with one hand while simultaneously amplifying it so that we could hear even the hum of each muffled strike. The vibrations took on a drone-like quality of underlying sounds while punctuated beats and the din of overtones formed a curtain around the central sounds. The second piece possessed some of the same aesthetic qualities, though Chase elected to play stick on stick producing higher-pitched beats. He moved around the drum agilely to get different textures of sound on his carefully tuned snare. This line of exploration peeked with the third piece in which he played slow rolling snare beats at different positions to access different pitches and overtones that really hung brilliantly in the ambiance of the church. His fourth piece moved to the ride cymbal in an exploration of a drone-like effect.

Parkins then took the stage. She began her set by making strikes with her feet which were somehow amplified. Then quick strikes with reverb turned it into a torrent of sound before she shifted into more nimble plucking without any effects to alter the sound. Eventually this evolved into the use of an echo effect that simulated the experience of a performance in a subterranean cave, where some sounds seemed to get caught in the corners or hollows in the room around us.

Parkins displayed her peerless ability with the harp by exploring in a multitude of directions. One of the interesting sonic moments that she was able to conjure through the harp was a kind of brassy rattle that formed a drone effect of her own.

Parkins’ second solo piece further explored amplification and reverb, but now adding in looped delays that created a chorus of sound, bursts of noise, and even moments that sounds like it was all happening underwater. She stretched the possibilities with bowed sections, the use of brushes, or rubbing the strings for high-pitched squeaks or sustained lines. Overlaying plucked sections with sustained squeaks gave it an otherworldly feel.

When it came time for their duo performance Brian Chase and Zeena Parkins faced each other, like two people at a public debate intending to have an engaging conversation. Parkins began on a smaller, electric harp. The two immediately plunged into a fascinating foray of actions and reactions with energy bursting out everywhere. Parkins’ sound on harp sometimes had an electric guitar-like quality, arcing up and down, or at other times sounded more like an organ. Chase’s drums were bristling, giving solid form to the aqueous qualities of the electric harp.

Through many of these exchanges, Parkins seemed to lead the way either with melodic turns or driving lines, with Chase chasing her. Or in other words, Parkins created environments or ecosystems for Chase’s barrage of improvisations to dwell, bounce, grow, or recede. In one particularly effective moment, Parkins began a rather shimmering line that Chase then concluded on a cymbal. The two maintained constant narrative tension through dueling lines, building off of each other, often at a breakneck pace. They also engaged in some brilliant aesthetic counterpoint.

They followed the first, extended piece with a shorter second improvisation. Parkins played her harp by running a string back and forth creating a low resonance while Chase created his own drone effect with the cymbal. The two then explored Chase creating tension, while Parkins used harp loops to create multilayered sounds ebbing and flowing.

Brian Chase and Zeena Parkins at the San Damiano Church treated their audience to a spectacular night of innovative and mind-bending music and the audience showed their appreciate with a standing ovation. Chase and Parkins are brilliant artists pushing deep into their craft. I can only hope that they do another performance soon to delve further into what they started on August 20.

Note: Parkins’ position in the room (in which audience sat on three sides with the performers in the middle) prevented me from photographing her during the performance without capturing many of the audience members, so I elected not to include an image of her here.