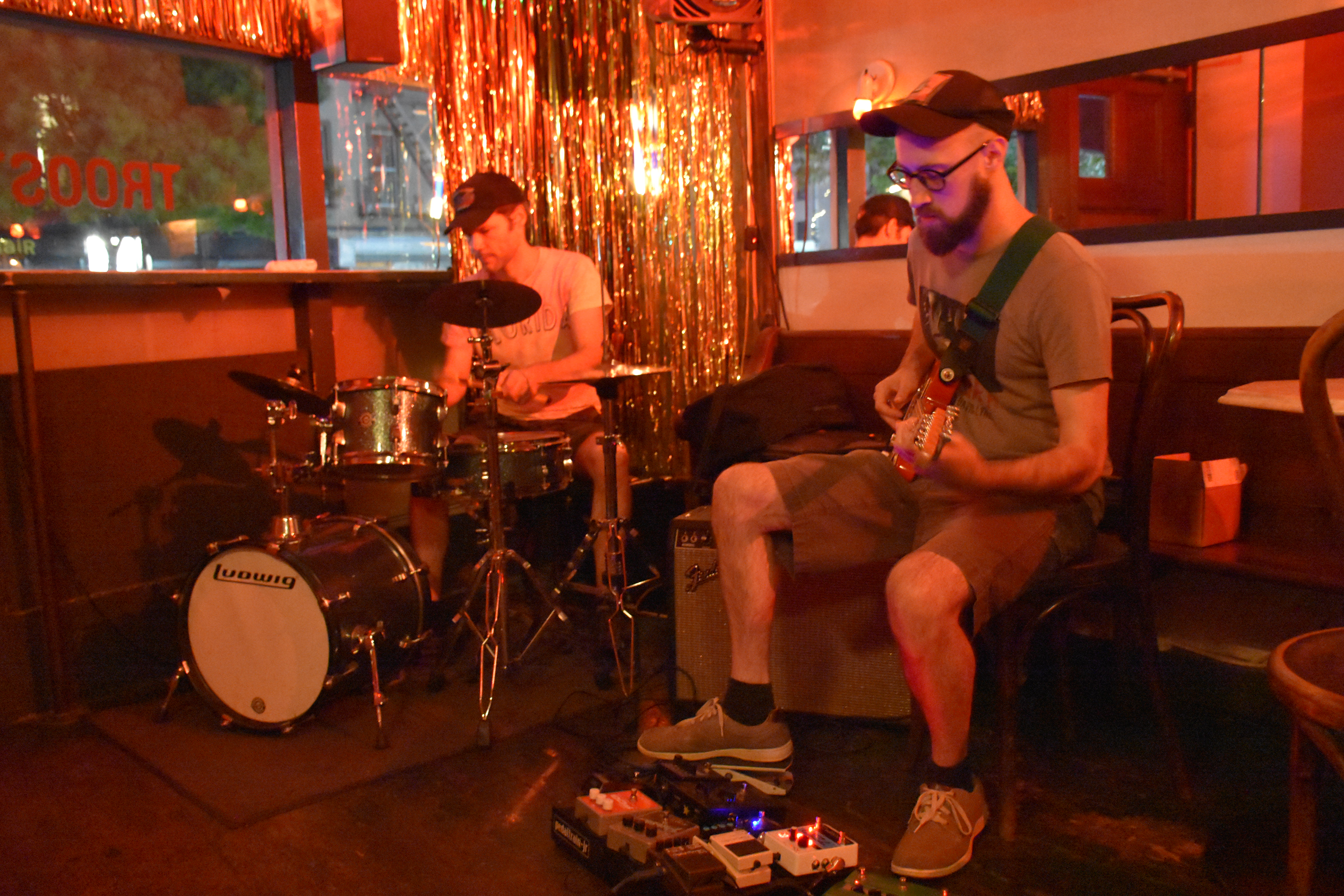 Electric guitarist Lucas Brode and drummer Kevin Shea met for an ambient duo performance at the Troost on Wednesday, August 22. What I heard defied all expectations that I had about these two musicians and represented a new dimension of their work (for me anyway). Shea opened with light shimmering cymbal work to which Brode matched drone guitar lines that melded eerily creating curtains of somber stillness with sighing, yawning sounds and moods. Throughout much of the music, Shea was the tension-builder, the maelstrom, while Brode was the storm, the booming sky, the distant thunder, the cracks of lightning overhead.

Their second piece began with rolling booms on drums, through which Brode’s sound arched its back slowly and made deliberate ascents and descents. But the piece began to unfold, to stretch out, to sonically stir itself. Shea’s drum work was the grit and the bumps in the road, Brode’s guitar was the water, the glue that held it together. Brode then evolved the aesthetic by shedding the aqueous fluidity, occasionally edging into jagged riffs, if briefly, before returning to mellower phrasing. Brode, using a screwdriver lightly on his strings produced another adventurous turn–they switched aesthetic roles–and Shea provided the warmth and cohesion needed by rubbing his drums with his palms.

The third piece, “Vague Sense of Virtue,” featured Brode soloing using a pedal to bend his pitches delicately. The fourth piece seemed to finally allow them to boil over a bit, like they had been hinting at all along, and they created their most striking images. Brode fleshed out the landscape and the atmosphere of the piece, while Shea gave life to the denizens of the land, all the sonic flora and fauna, teeming with life, until they concluded with shimmering cymbal, like a sunset concluding this scene. This was the climax of the performance, brilliantly orchestrated.

The fifth and final piece, seemed to draw back out the final moments of twilight with Brode providing the slanting rays of light, Shea a few unexpected sparks. This piece was a fitting end to a vibrant set of creative music full of imagery, of rich color, red, purple, and deepest blue.

Brode and Shea were followed by a quartet made up of Joanna Mattrey, Ben Cohen, Drew Wesely, and Eli Wallace, which I was unfortunately unable to attend.