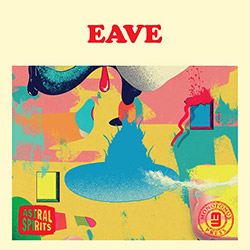 EAVE is a free jazz group based out of Montreal. The band is comprised of Anna Webber and Erik Hove (saxophones & flute), Vicky Mettler (guitar), and Evan Tighe (drums). Webber works out of New York.

Their self-titled album opens gently, slowly unfolding sound like a swaying wind chime. “Merriweather” seems to me a prelude to the following, “Liver Eating”. We are eased into EAVE and feel its energy rising. As I listen to the second track, “Liver Eating,” I could not find an element that compared to any other song to which I have listened, something truly rare, challenging me think about music and sound in new ways. The song begins like a free jam and finally unravels at the conclusion. Evan Tighe on drums brings a funk to the track to which I am immediately drawn. This is particularly interesting paired with Vicky Mettler on guitar. We hear the percussion and guitar communicate like they are in conversation with the other. As the track finds its midway point, we hear the force of each instrument plummet. Here, we are able to study the soft motions of sound individually until “Liver Eating” picks back up again at the five minute mark. The track concludes; the stillness of the midpoint balanced by the unrestrained energy of the opening and closing. “Axe or Chisel” brings an eeriness to the album arc. Strings tremble like bugs hovering over something that was once alive. I listen to this track and feel like I am listening to decomposition. This swarm of bugs is feeding and I can hear it vibrate and hum until the percussion picks up and the guitar creates a slower, more drawn out sound. We hear a similar tone follow in “Denver Bob.”

“A Well Worn Path” is the soundtrack to a windy night on a porch somewhere away from city noise. The imagery is rural, and I hear the doors of a shed opening and slamming shut. Wood creaks and gates close rhythmically as we hear the sound of metal scraping up against a surface. There is life in the banal objects that fill the landscape, but there are no people. Like much of this album, we feel the almost-human presence of everyday noise and sound on this track. The following, “Owyhee” seems the more aggressively charged version of the prior track. The guitar strings move manically as we hear the drums pound over each layer of noise. Finally, the track concludes, melting into the next, “Yakima.” I particularly enjoyed “Yakima” around the three minute mark when the guitar sounds are synthesized and electric. The sound waves feel cut and manipulated but still trying to break through. This left me anticipating the moment of final disorder; where noise might combust or simply stop immediately. EAVE draws this feeling out and ends in a gradual stillness. I appreciate this disruption of expected flow. Finally, as the album concludes, we hear the fracturing of energy I think I have been waiting for throughout this listening experience. The album builds, steadily, toward the final moment of release at Memorandum’s end. This seems a fitting culmination to EAVE’s self-titled album. The imagery is dark and grows darker, leaving us in a moment of disarray and unsure of where to go next. Visually, each track resembles a series, almost like a show of work hanging in a gallery. We feel the variation, but the tone seldom changes to create a larger impact when we stand back.