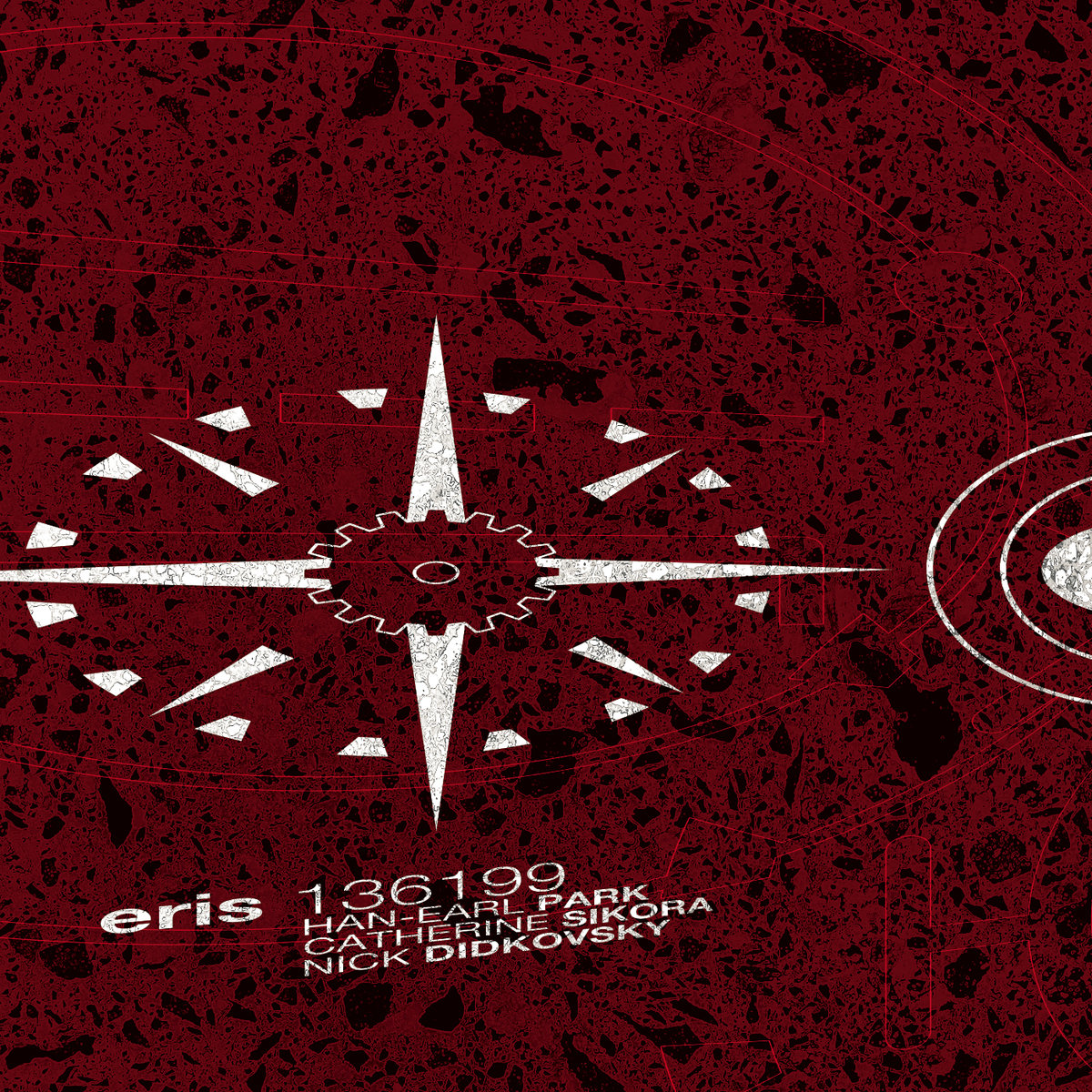 It has been about 24 hours since a speeding car struck me in North Philadelphia (9/21/2018, approx. 8pm). The fact that I can sit down and write about it so soon afterward will hopefully enlighten the reader to how fortunate I am to be here to compose this for you . . . and more importantly myself. Since waking up this morning that life-changing split second has run through my mind several times. It has played fast, it has played slowly, but it is still playing. Just days beforehand I’d tried to sit down and listen to the new album by Han-earl Park, Catherine Sikora, and Nick Didkovsky. I couldn’t do it. Not because the sounds presented were out of my reach, but there was a certain distance between the sounds and me then.

I might even say that this music is not made for simply listening . . . but for dissecting and/ or measuring memories. Eris 136199 is made for a specific audience, but I don’t think the audience that typically shows up to hear this music is how I envision it being useful. My years of going to noisy/ avant-garde shows had my Black ass surrounded by white kids full of angst and empty on showers. Yet, as an aspiring clinical psychologist, maybe the work of these artists would better fit a session with a psychoanalyst. If allowed, let me explain a bit. We all have songs and sounds attached to certain memories and periods of life, yet these could actually help us find more reason/ root in those moments to better assist us in navigating our current and future lives. My personal example would be 112’s “Cupid”. It is one of my favorite songs from high school, yet it reminds me of a certain crush I had. After listening to the song a few times (many years ago) I figured out why the attraction to this person was so strong. The point is, certain tunes and sounds will forever be connected to memories and incidents, and Eris 136199 is no different for me.

“Therianthropy I-IV”, “Adaptive Radiation I-III”, “Universal Greebly”, and “Hypnagogia I-II” are the track titles. I can understand how the reader/ listener could find it a bit limiting to lump all of the compositions into a pile while describing the record, but the music itself does that for me and do not think it positive to write against the music, rather than in/ under its direction. At times guitarist Han-earl Park reminds me of what my bones and muscles would sound like if this speeding vehicle had in fact crushed or torn any of them (I do not have any broken bones, but I am still awaiting test results on my foot muscles). The sometimes slow, sometimes fast plucking and riffing literally makes me cringe today while writing this. My screaming at this speeding driver a split second before their vehicle crashed into the back of my bicycle might recall the blare of Catherine Sikora’s tenor sax throughout the album. I think of my repeating “WOAH, WOAH, WOAH” slowed down and amplified for full effect; loud enough that people heard the crash and my descent into the concrete of Nick Didkovsky’s improvised patterns.

For me, Eris 136199 is no place near a pretty listen. It is an endurance test, for the musicians and myself alike. Yet, I am very glad it exists. Having not known about the trio before my editor handed me this record, I have found in it important sounds that I can pass on to fellow musicheads and cyclists. “Yo man, you ever been hit by a car?” “Yeah, but maybe we should listen to this album I just picked up before I tell you about it.”