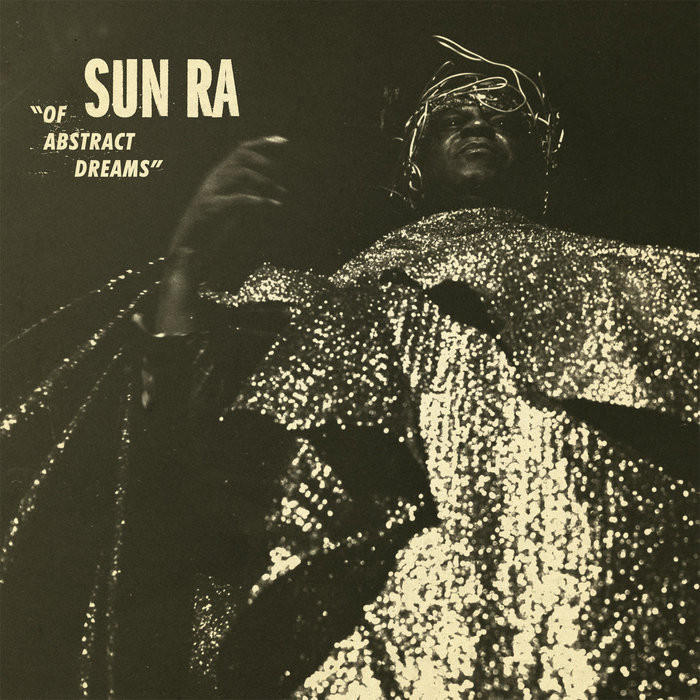 About a third of the way through Robert Mugge’s classic 1980 documentary, A Joyful Noise, a group of young men on the street talk about mythic Sun Ra and his Arkestra’s presence in their neighborhood in Philadelphia’s Germantown section. “I live a few doors from Sun Ra, it’s a nice group . . . I see them everyday.” The scene cuts from the street to The Pharaoh’s Den, the community grocery store owned and operated by members of the Arkestra. Posted up behind the front counter and in the center of a bustling group of young kids, baritone saxophonist Danny Ray Thompson leans in and explains the store’s mission and by extension, the Arkestra’s place and purpose in the community. “The store was started because I felt something needed to be done in neighborhood for the one’s who listen. Children need to be taught discipline, so that when they get older, won’t be no problems. Another reason why the store was started is I wanted to do something in the name of the ancient Pharaohs. I got a sign over there that says ‘Space is the place,’ so I try to teach the children space, precision and discipline.” In the decades prior to landing in Philadelphia, Sun Ra and his Arkestra had taken up residence in New York, and the south side of Chicago, embedding themselves in the community and allowing each city’s unique personality shape the music the band produced.

Ra, the living myth who graciously offered us a reprise from our earthly suffering by informing us that “space is the place,” was not only talking about outer space, but space in terms of locality and community. During their time in Chicago, the Arkestra developed a sound that amounted to a furious and elegant exposition of the raw DNA of the Blues. Using the Blues as a master key, Ra and his big Band were able to expand and stack the music up into Ellingtonian levels of musical density and complexity. By this point in the 1950s, the Arkestra’s music embodied the grit and sophistication of post-Great Migration urban Chicago. While living in New York during the 1960s, Sun Ra and his Arkestra had embraced the kind of restless experimentation and heady modernity characteristic of New York’s avant-garde art and music scene. After leaving New York and settling in the beautifully green, yet urbane Germantown section of Philadelphia in the 70s, Sun Ra and his Arkestra resumed it’s heavy schedule of touring and releasing records all the while taking deep root within in the neighborhood and the city at large.

When asked why he and his Arkestra chose to come to Philadelphia, the composer and myth-maker hilariously characterized the move as a humanitarian effort of sorts “To save the planet, I had to go to the worst spot on earth, and that was Philadelphia, which was death’s headquarters.” Like much of Sun Ra’s ideas and declarations, this quote may appear bizarre, but only if it’s removed from the broader context of the group’s relationship with the city and the work Ra and his Arkestra did here. One of the most significant extra-musical endeavors the Arkestra undertook during this period was the founding of the Pharaoh’s Den grocery store. Managed by Arkestra saxophonist Danny Ray Thompson, the store was fundamentally different from the thousands of convenience stores that peppered city blocks throughout the city. In addition to the food on the shelves, Thompson sought to educate members of the community (especially youth) in the intricacies of science, mathematics and the Arkestra’s own brand of space-age mystery systems.

Recorded in 1974 or ’75 (the exact date is unclear) and recovered from the archives at Philadelphia public radio station WXPN, Of Abstract Dreams is a brief and elegant snapshot of this important time in the Arkestra’s history. Opening with a broad, exploratory take on the classic “Island in the Sun”, the Arkestra’s playing on this date is open yet focused and disciplined. The nine piece lineup consists of John Gilmore (tenor sax), Marshall Allen (flute & alto sax), Danny Ray Thompson (baritone sax), Atakatune (oboe & congas), Eddie Thomas (drums), Elo Omoe (bass clarinet), Akh Tal Ebah (trumpet & vox), James Jacson (congas & vox) and Ra himself on piano. “New Dawn” opens with Ra’s dense, majestic chording, and sets the tone before the band heats up and Gilmore enters with a solo that slides between understated balladry and ripping “free” passages. Packed with ideas and raw power, “New Dawn” exhibits the kind of regal, exploratory sound found on contemporaneous Arkestra recordings like Sleeping Beauty and Some Blues But Not The Kind That’s Blue. “I’m Gonna Unmask The Batman” is a fun and campy vocal tune underpinned by Ra’s funky and texturally complex boogie piano play. The interplay between Ra’s deeply swinging left bass line and the scattershot chords dance beautifully against the band’s brass section to create a  dynamic call and response. Adding in an almost cartoonishly deep baritone vocal, the piece’s loose, celebratory mood explodes, casting a full-on juke joint spirit upon the atmosphere.

The driving, energetic Arkestra standard “I’ll Wait for You” rounds out the set. Ra’s playing is beautiful, rhythmically loose and harmonically rich, his left hand holding the music’s center of gravity in place as the rest of the ensemble rises around him like a gathering storm. The music searches and builds upon a philosophy and aesthetic that is simultaneously weary of the corrupt ways of the old/present world while remaining firmly optimistic of the potential for a new one. Enveloped within its forceful back beat and boundless creative deviations lies the heart of a disciplined ensemble, mentored and guided by a visionary leader. Midway through the piece, the Arkestra settles down and Ra enters with a soft, intentional vocal refrain; “In some far off place, many light-years in space . . . I’ll wait for you. Where human eyes have never seen, I’ll build a world of abstract dreams . . . I’ll wait for you.” The message is layered, letting us know that Ra will be present, provided we meet him wherever he and his Arkestra decide to go.