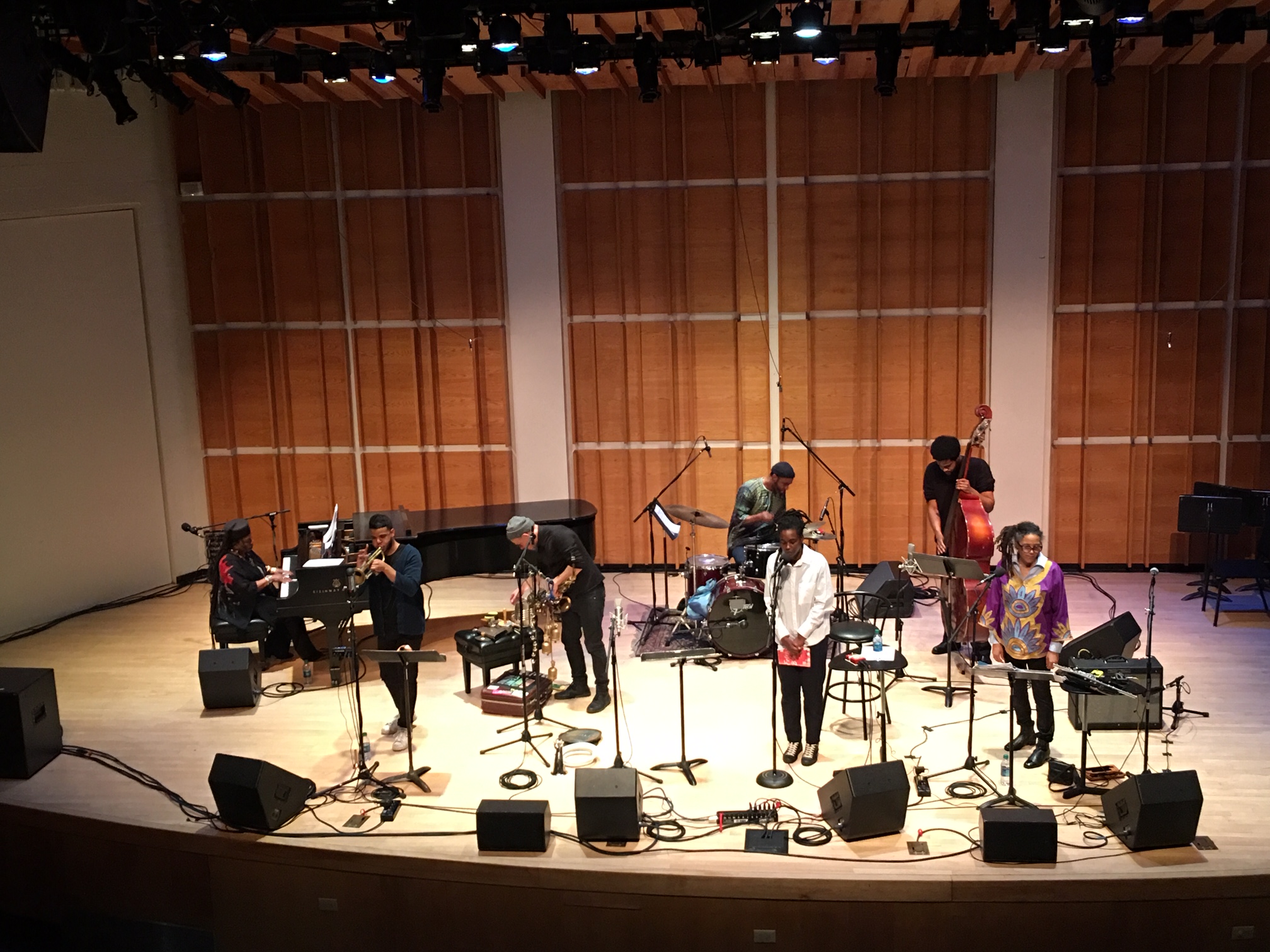 America often revels at powerful Black figures being co-opted by the white supremacist-capitalist super-structures of our society in familiar themes we have all heard many times over: X escaped the projects and now makes millions as a star athlete, actor, or performer, which enabled them to leave their old world behind. The underlying message is that people only advance as individuals and that there is no justice to be had for the people the system exploits most. Over the past three years, the free jazz collective, Irreversible Entanglements, has staked powerful claims to the contrary. The band is fronted by Camae Ayewa, the artist known as Moor Mother, who I once heard say something to the effect of, “I am not looking for a way out, I am seeking justice for my community.” Ayewa regards art as a “technology of liberation” and she brings her poetic mastery to the helm of the band.

Ayewa is arguably the most profound musician of her generation in free jazz or experimental music in terms of her vision. She addresses the whole story of the African diaspora from the first slave ships through continuous acts of resistance to the present and then, through her intricate craft, to vivid alternate futures. Her collection of poetry, Fetish Bones (Afrofuturist Affair, 2016), reads like one great chapter of human history, one that has been repeatedly erased. But having been sustained in the words of Ayewa’s ancestors and generations of griots, this history is now given new life in her own breath. She calls out imposter liberators and fake artists in the process with the kind of uncompromising critique reminiscent of Amiri Baraka.

On the evening of February 28, at Merkin Hall, the audience was treated to three sets. The opening set featured Ayewa with master artists from two earlier generations, pianist Amina Claudine Myers (b 1942) and flutist Nicole Mitchell (b 1967). Myers has been active as a composer and arranger since the mid-1960s, leading sessions for Leo, Black Saint, RCA, and a number of other labels, and was an early member of the Association for the Advancement of Creative Musicians (AACM). Mitchell has established herself as one of the leading American composers and improvisers over the past two decades, is the former chairperson of the AACM, and holds the William S. Dietrich II endowed chair in jazz studies at the University of Pittsburgh. Mitchell has led many groundbreaking sessions with bands such as Black Earth Ensemble and Mandorla Awakening. The meeting of Myers, Mitchell, and Ayewa on one stage was certainly a historic moment. 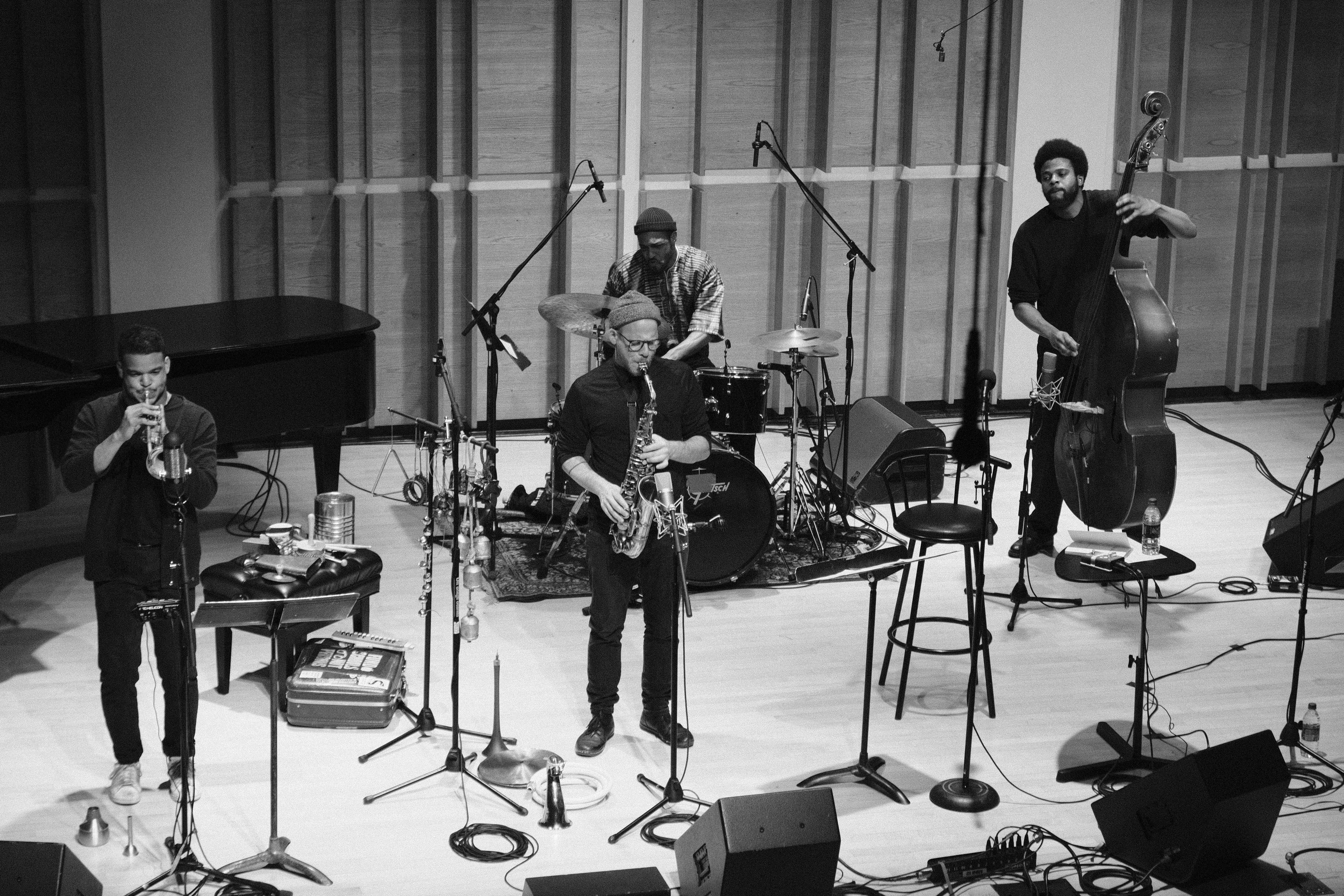 The second set featured an instrumental quartet version of Irreversible Entanglements, comprised of Aquiles Navarro (trumpet), Keir Neuringer (alto saxophone), Luke Stewart (bass), and Tcheser Holmes (drums). Then, after a brief intermission, all of the musicians appeared together for the final set. These sets built with intensity. The first set provided a more open setting with Ayewa’s poems accompanied by Myers nimble piano lines and Mitchell’s rich, soulful flute. The quartet brought a bit more fire to their pieces. And the final set was a septet performance for the ages. For the sake of brevity, this review will focus on the final set. 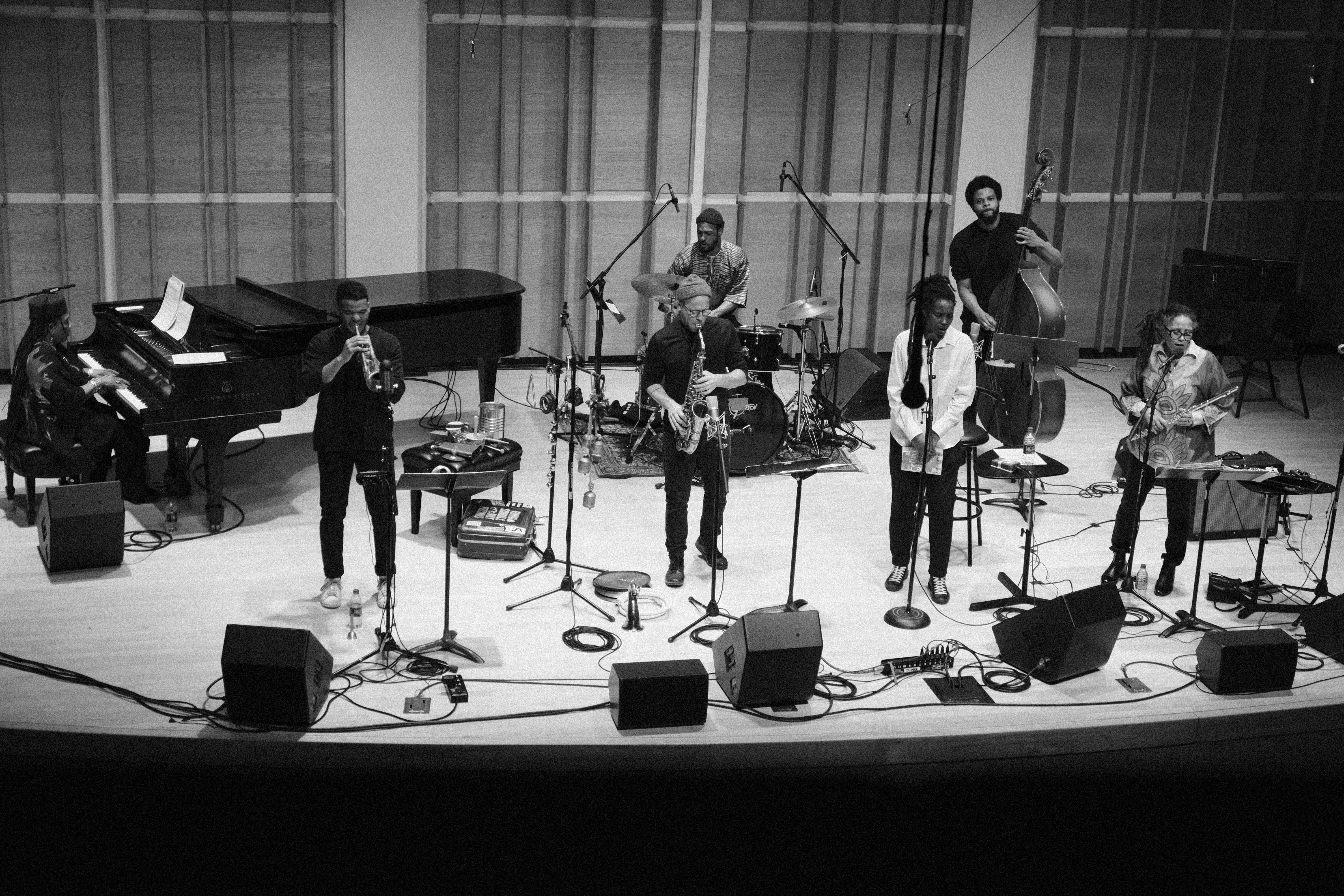 Bells, bass, and rumbling drums opened the third set with Ayewa chiding the idea of “freedom down the road” drawn from her poem “For Little Black Boys Drowning in Escapism.” She then melded it with other poems with lines such as “how far do we have to go to get away from the hell . . . we are on a journey back to ourselves . . . back to each other.” The music grew and swelled around her words, forming a tense, textural backdrop. Through most of the performance, the music climbed and climbed, but then it leveled out with Ayewa’s poem “All I Want Is You Alive,” that resonated with a kind of triumphant warmth:

i dont want no justice

what i want is you alive

i want yo hands

that ever stood in our way

every legacy of wealth

every pig eating its own remains

baptized by a evil queen

thirsting for the blood of our babies

the strength of our men

and birth every future generation

with torches and swords in dey hands

armed with the inner future of victory

put out the fires

of every village that’s been burning

since man stumbled out of stone salt caves

without hue and god

without heart or brain

for all the turkeys necks and hog mogs

for the pig ears and intestines

every last one of them

til we all alive

till we all bleeding our own algorithm

til we aint dead no mo

til we got no need for heaven

and the collection plate is filled with

the ritual of ancestors

with a vengeance we aint never seen before

because they aint never forget

they aint got to see no death on tv

to feel the blues of old toms farm

to feel the blues of death lurking

with no roots to being human

made in some laboratory

where evil is satellite and salvation

Ayewa’s genius is in her magnificent ability to form such riveting images from myriad threads of history in a way that is always personal. She talks about community, ancestors, enduring strength, survival, and solidarity because she has witnessed it herself, she has heard the sound of their breath, seen the colors of their eyes, been told the tales of their deeds, and bore it all to memory. Ayewa possesses a kind of authenticity that few can rival.

The music that the other six performers brought to the stage burned across the spectrum of color. The depth of the many layers of the music was clearly developed, with Stewart and Holmes building complex and ever-moving rhythms and Navarro and Neuringer displaying an instinctual anticipation of each other. Myers added texture everywhere, while adding color to the horns, and accented the rhythms underneath. Mitchell contributed a cool fluidity to much of the music and at one key moment during “All I Want Is You Alive,” the mournful vocal quality of her flute lifted the entire piece. Though much of the music was about group interplay, occasional, well-placed duets or trios highlighted some amazing elements, including a duet of Myers and Stewart that Mitchell eventually joined, and another moment, just before the end, featuring a duet of Myers and Mitchell.

We can hope that this is not the only opportunity for these seven performers to share a stage. Their magic was on full display throughout the evening. We also look forward to another record from Irreversible Entanglements, whose 2017 self-titled release was one of the great statements of the decade. 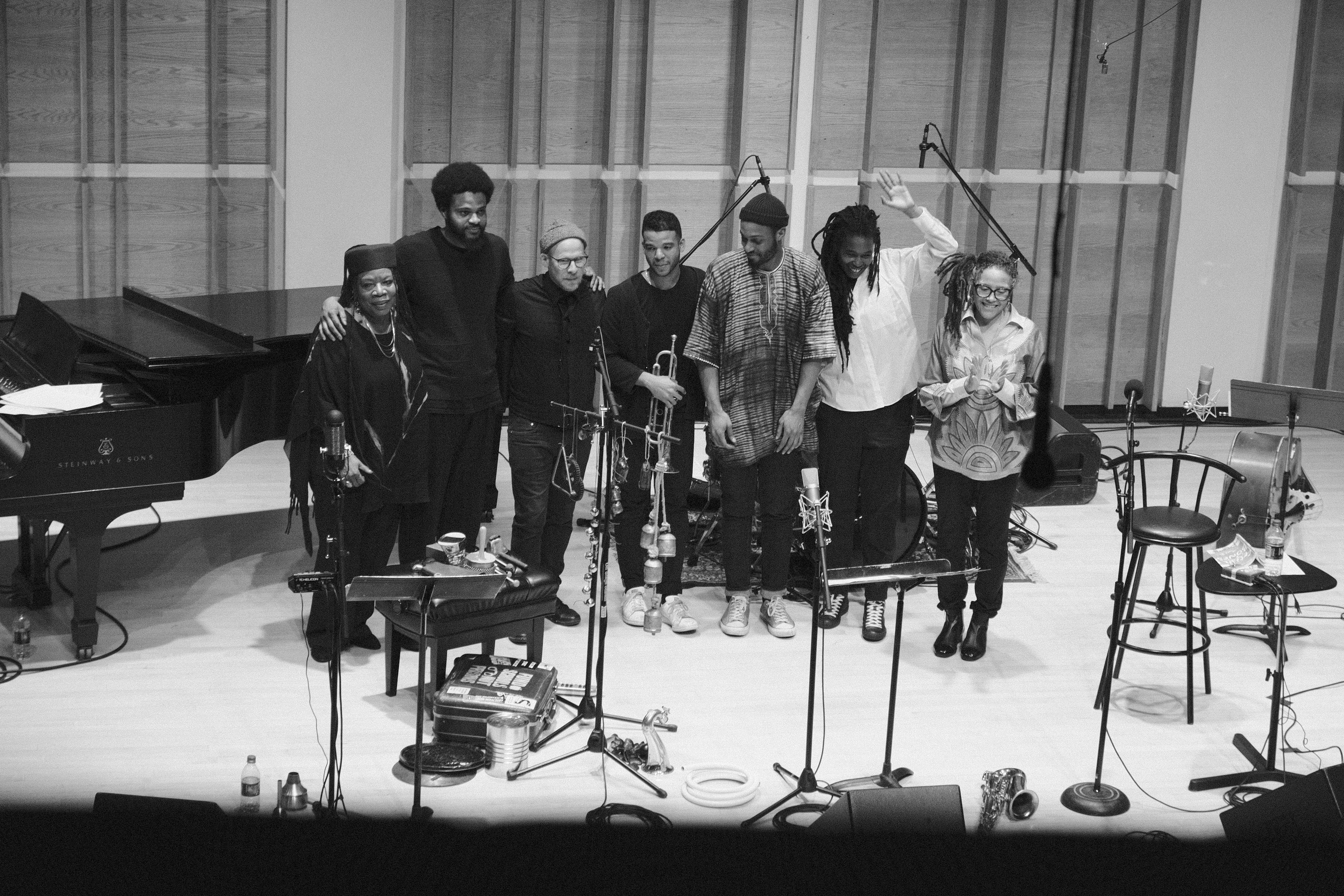