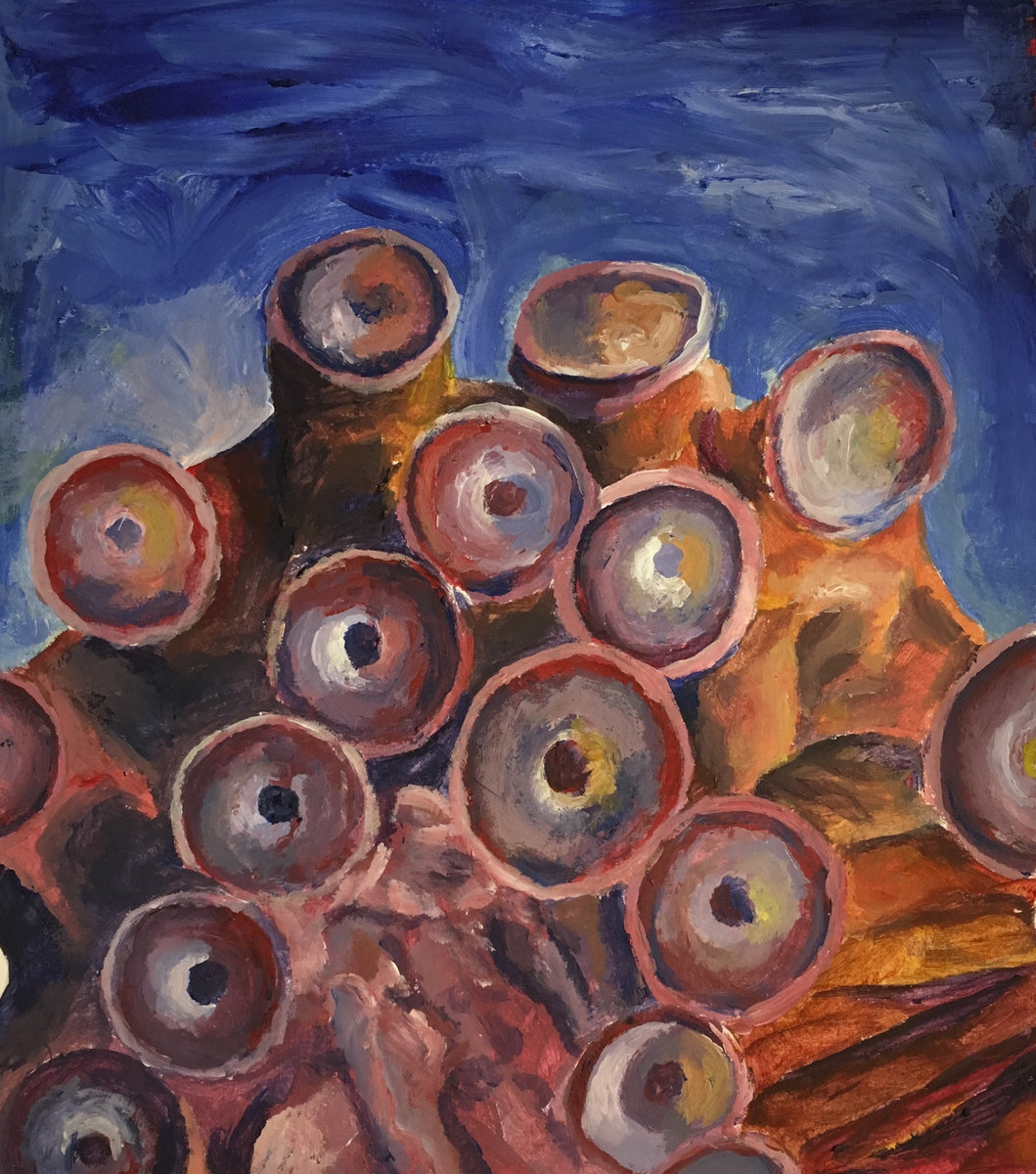 Alberta native, Jessica Ackerley works with drummer, Nick Fraser and bassist, Mat Muntz on her debut album, Coalesce (available on Bandcamp). The record is a study of space through the relationships between sound and silence. The title suggests an intention of sound. Before listening, we are made aware of a “coming together.” As the album begins and progresses, this is evident in the way momentary lapses of silence work to contrast and complement the overflowing sounds of bass, percussion, and Ackerley’s guitar abstraction. The attention to what is not audibly present works to frame the individual instruments, allowing each element to exist outside of a fixed structure. Despite this, the album follows a “rhythm”, which seems to break only on “‘Merica” and “Snakes in the Grass.” This is present in the repetition of the rise and fall of notes played. Ackerley opens with “Clockwork,” gently caressing the space and increasing the pressure throughout the album. Here, the listener is led in, brought to a specific place, and then abandoned. This becomes liberating as the variation of sound provides a multitude of alternative experiential areas. As the narrative is obscured through its development, our listening becomes increasingly subjectivized.

As Coalesce moves through its seven tracks, the percussion is dominant but commands a subtle attention. The guitar opens each track, reverberating until Fraser disrupts its path on the drums. While we focus on the guitar and the places it passes through, we cannot ignore the heavy pulsing which provides a complete environment for the music to exist within; a kind of canvas for Ackerley’s art. The album is, first, a study of experimental string work. However, as participators in such an experience, we also become attuned to what is not emphasized. Coalesce showcases Ackerley’s ability to paint with sound, using the guitar as her medium. This stimulates a conversation (as opposing sounds receive and respond to each other) between the strings and drums, moving through moments of delicate interaction to escalating hostility and chaos. The album’s use of percussion prepares the listener for abrupt changes in form, often increasing or decreasing speed and intensity to highlight Ackerley’s gestures on guitar. Though the pace of motion throughout the album shifts, the strings communicate with the drums after the tone has been set (namely, through the soft humming of the drums which progress into an aggressive and sporadic pounding). Ackerley merges opposing ideas in art and sound to create a space for continual motion. The experience is powerful because it does not reach a conclusion, but allows the sound to spiral. Through her attention to contrasting energies, we experience the impact and necessity of absence. She eases the listener into this area and subjects them to brief moments of anxiety and panic. This continues until it simmers, and we are left to trace over the strings Ackerley leaves faintly vibrating.

Ackerley’s album artwork provides yet another layer to our sensory interaction with Coalesce. The painting is a visual map for the sounds expressed throughout the album. Depending on where we start looking, we may see a gradual progression of gesture. This is apparent when we examine the rough blending of color and form from the bottom of the work upward. Here, we notice literal spheres, each with different depths, intentionally arranged but also scattered through the piece. This is parallel to Ackerley’s musical curation on the album. If we begin from the top of the work and continue out or downward, we are eased into the complexities of Ackerley’s art (either through sound or image). The sky or background, comprised of different concentrations of blue, leads us into the experience the way “Clockwork” begins. As the tones get warmer, we see a development of shape. The folds and hollow areas, comparable to fragments of empty sound, work to enhance the way we receive moments of greater detail and complexity.