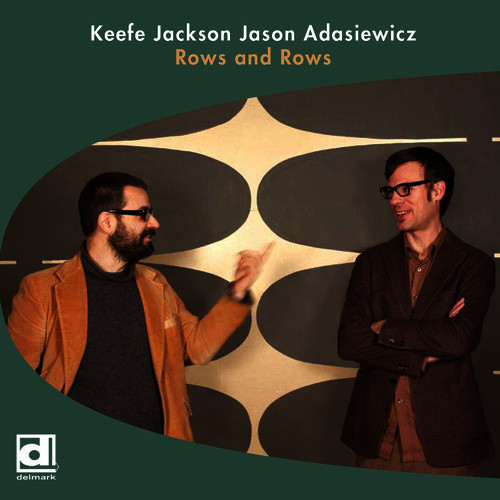 The decade-plus pairing of tenor saxophonist/bass clarinetist Keefe Jackson and vibraphonist Jason Adasiewicz has stood as a fruitful and prolific relationship. The Jazz duo is a unique and challenging undertaking, too often the duo format can leave even the most gifted players and composers in an uphill battle to push against the inherent limitation of such minimal
instrumentation.

The album opens with “Caballo Ballo”, a pensive, minimal piece in which Jackson’s tightly wound and well-organized lines slink and jump out around Adasiewicz’s rolling polytones. Immediately, the listener is ushered into a sparse and playful world of sound. Pieces like “Where’s Mine” and “Questioned, Understood, Possessed” find the duo delving deep into quirky
and colorful performance style, not dissimilar to the bizarro compositions of American composers like Carl Stalling, Raymond Scott and Hanna Barbera’s Hoyt Curtin. Jackson’s deftly sharp tenor lines fight and dovetail with Adasiewicz’s freely percussive playing to dramatic, tense effect. “A Rose Heading” opens with Jackson’s lonely Bass Clarinet lines winding through
the porous open spaces. As Jackson sets the tone for the piece, Adasiewicz employs a beautiful use of sustain as Adasiewicz to build up rich, blue waves of polyphony. “Swap” is a freer, more forceful performance. With it’s intricate counterpoint established at the onset of the piece, “Swap” finds the duo flying out into an improvisational abyss, spinning together new bits of dense harmony and rich melodic portraiture.

The album’s title track and aesthetic centerpiece “Rows And Rows” is anchored by Jackson’s flighty, West Coast Cool inspired melodic theme. The most overtly Bop-inspired piece found here “Rows…” is an accessible and melodic exploration of older Jazz traditions that at first glance appears to have a merely tangential relation to some of the album’s more abstract
moments. Remarkably, both Jackson and Adasiewicz manage to remain anchored to the rhythmic and melodic grounding of the piece’s main theme, while their playing seems to search out further and further, exploring the atmosphere around it, like two kites being flown on strings, spiraling upward, thousands of miles away from the Earth’s surface.

Despite its minimal instrumentation used throughout the album, the duo is never found lacking, proposing and elaborating on a wealth of fertile ideas throughout the course of nine relatively short compositions. Jackson & Adasiewicz create a miraculous space in which clever, melodic composition is enriched by bold and tasteful playing.