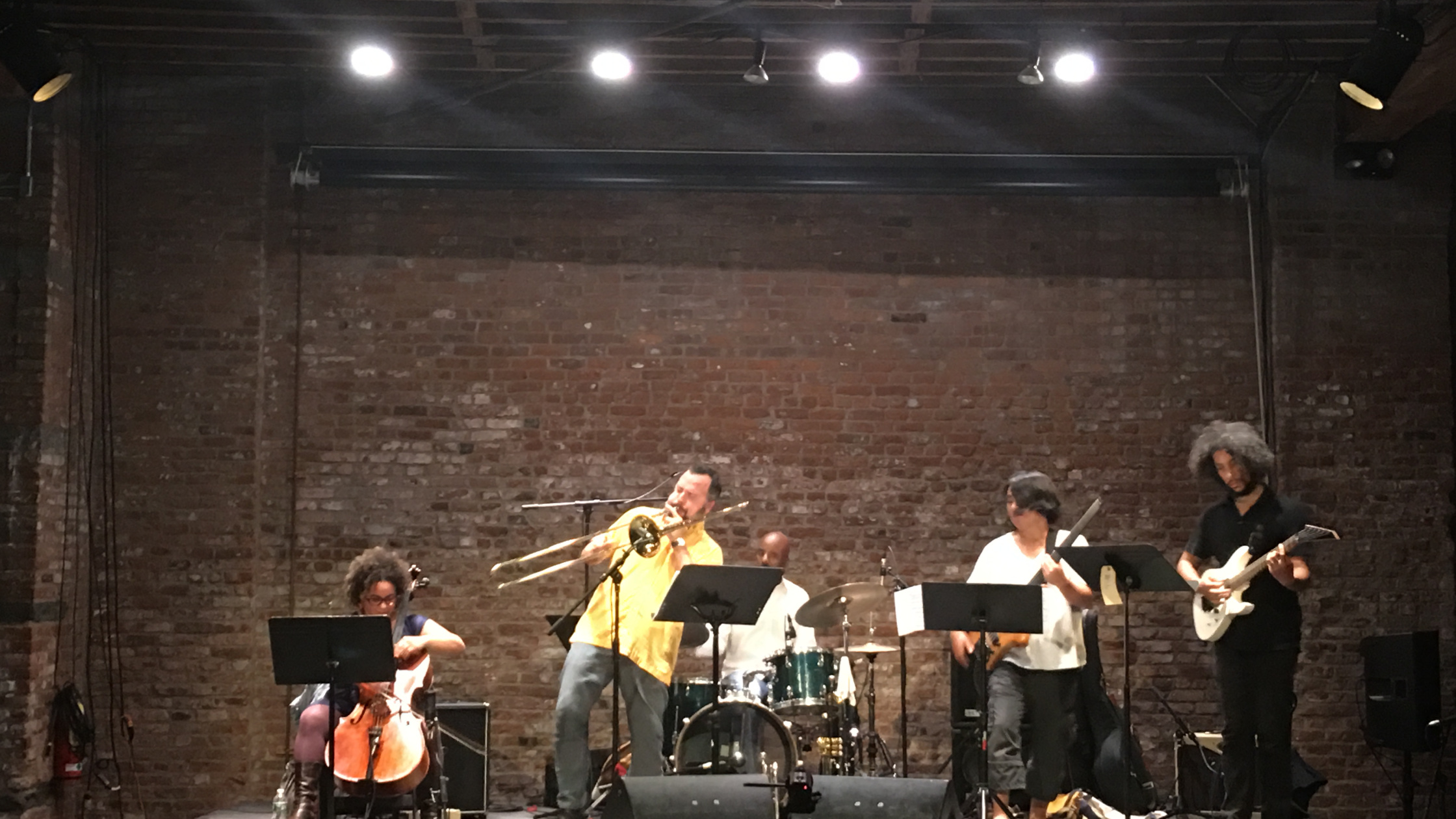 One of multi-instrumentalist and composer Taylor Ho Bynum‘s great talents is picking the right people to work together in an ensemble such as his long-standing sextet or his ambitious PlusTet. With Rank Sentimentalist, he has done it again–bringing cellist Marika Hughes, guitarist Evan Patrick (previously working under the name Evan O’Reilly, from Bynum’s first sextet lineup), bass guitarist Stomu Takeishi, and drummer Chad Taylor. The result was a deeply complex improvisational unit that covered vast stretches of musical territory at Pioneer Works on Friday night.

Since his early work with his first sextet and his larger ensembles with the Spidermonkey Strings, Bynum has proven himself a visionary and a key figure in his generation of creative musicians. While he is known most for his playing on cornet, he has also broadened his scope to include most instruments within the trumpet and low brass families, which he fully displayed Friday night.

Rank Sentimentalist played one long improvised piece that displayed a range of aesthetics that stretched from intricate melodies to funky grooves to harsh noise. Within that spectrum, the band managed to create a deep, voluminous sound, mainly coming from the two guitars, in which the submerged sounds of trumpets, cello, and drums sparked out with bright flashes within a palette of sounds blue and darker. Takeishi often kept the pace moving through a murky, heartbeat-like rhythm in tandem with Taylor, who played all of the angles. Patrick and Takeishi then created the great wave into which the others plunged. Though at times the balance of guitars overwhelmed the cello, Hughes also had decisive moments that were vital, sharp, and played a necessary counter to the deep sonic flood that enveloped all else. Meanwhile, Bynum either danced like slanting sunlight upon the aqueous surface, or dove deep and head-long like brilliant lightning into the abyss. The music was soulful, honest, and even mournful, set against varying doses of foreboding.

Rank Sentimentalist was not the only music at Freedom Works on Friday. Bynum was followed by a virtuosic solo set by trumpeter Peter Evans.