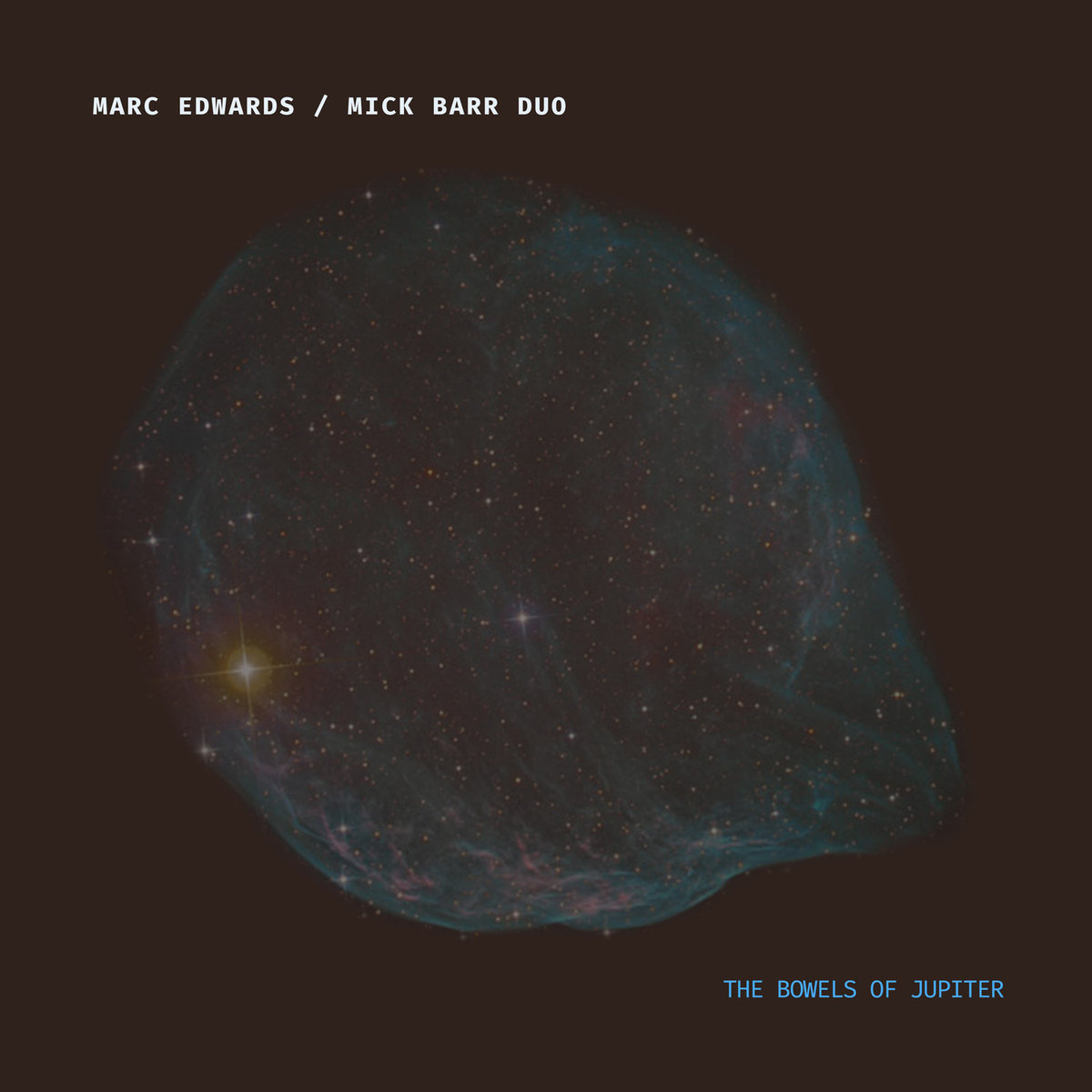 Duo records are made for the patient listener. There is typically a special kind of intimacy unfolding that invites interpretation or alienates those within earshot. Depending on the genre (loose use of the term here) and the methodology of the musicians, great ideas can become historic documents or forgotten works. Consider John Coltrane’s Interstellar Space (with drummer Rashied Ali); Trane had been on the trajectory of universal exploration and decided to give it a go without accompaniment, only a heartbeat (as Dr. Milford Graves might say). It was a new approach for him that he sadly didn’t get to explore more of. On the flip side, guitarist Sandy Bull cut his best material with legendary drummer Smilin’ Billy Higgins. Fully capable of going at it solo (“Little Maggie” is a jewel of an example), he might’ve realized that his powers were heightened by the presence of the ultimate pulse.

Drummer Marc Edwards and guitarist Mick Barr’s The Bowels of Jupiter is a predictable record for seasoned listeners, but a great place to start for those not familiar with the avant-rock sub-genre. The album starts off with “Molten Lava,” a simple, playfully chaotic 5-minute piece that lives up to its name. In contrast, “The Rings of Saturn” is an ambient-influenced piece with a quieter guitar drone behind heavier, spacey percussion. “The Asteroid Belt” utilizes a similar structure to the opening cut, yet it shows Edwards handling a lighter technique on the drums (he might be using brushes, but I can’t really tell). By the time “Lightning Strikes” and “Venus Upper Atmosphere” are finished I believe the listener will better understand the pattern of the record (and many duo records in general).

The musicianship displayed represents a collective who can, and probably have, played in various settings. There are tinges of jazz-influenced drumming and McLaughlin-inspired shredding (at one point the duo reminded me a bit of a cross between Tony William’s Lifetime and early work of the Baltimore based duo Microkingdom). Sprinkle in some Environments musings with subtle electronic ambience and the new listener will get a decent overview of the usual guitar/ drum duo output. Boasting space-themed track titles, Bowels of Jupiter is ground that pulls from a couple of musical influences and manages to represent the contemporary avant-rock scene.