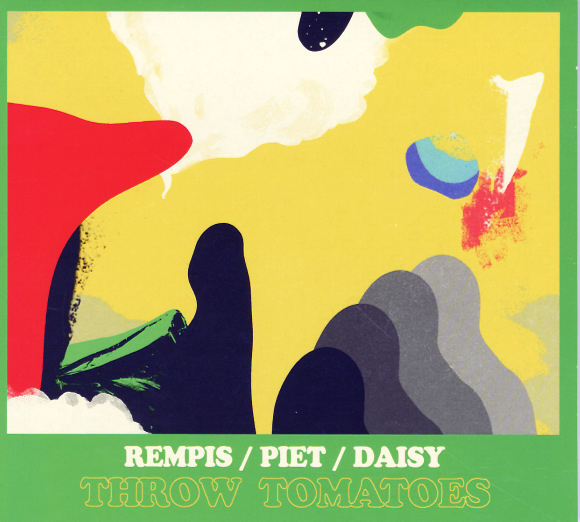 Throw Tomatoes is an open call for listeners to honestly respond to the music however they would like to, even if that includes, as Matt Piet states in the liner notes, “If you are revolted by the madness of our method, well, by all means, revolt: throw tomatoes.” The two completely unapologetic and energy filled pieces document the third and fourth live gatherings of musicians Dave Rempis (saxophones), Matt Piet (piano), and Tim Daisy (drums).

Just under an hour long, the record consists of a multitude of fast-paced movements and balancing acts of the three instruments. Throughout the two pieces it can be heard that Rempis, Piet, and Daisy each have their own styles and forms of improvising music. Yet, there are no clashing moments where one can hear a disagreement between players. Every shift in melody, rhythm, and tone made in the piece is only an extension to the music made by one musician in response to another.

The record opens up with Daisy setting a base for the rest of the piece in “To Play Is The Thing.” What starts off as a light and surreal introduction quickly builds up with the addition of Piet and Rempis. Throughout the entire piece, each member is very active in their playing, adding an additional layer to the music. Both Rempis and Piet are able to dominate the melody of the piece, but even so, Daisy is not pushed to the background at all. The percussive textures that he adds pierce through the rest of the music and feel necessary in pushing the piece forward. Every improvised section feels intentional and natural, even the pauses that last just a second each feel like a necessary breath for both the musicians and the listeners.

The second piece in the record, “The Thousand Natural Shocks” only continues this lively play. While the sound of the saxophone is very upfront and hard to miss throughout the two pieces, there is an importance in also focusing on the pianist and drummer. At first glance Rempis seems to be leading the majority of the piece, but the truth is that there is a constant shift in the band dynamic. There is an amazing interplay between the three musicians that naturally shifts the balance to suit the tone of each section.

It is clear that there is a strong connection between Rempis, Piet, and Daisy and that is what allows the entirety of the record to be captivating. It is also important to remember that these two pieces are just the third and fourth times this group has come together to play live. With the strength that these three have already, their future live session recordings would be ones to look out for.