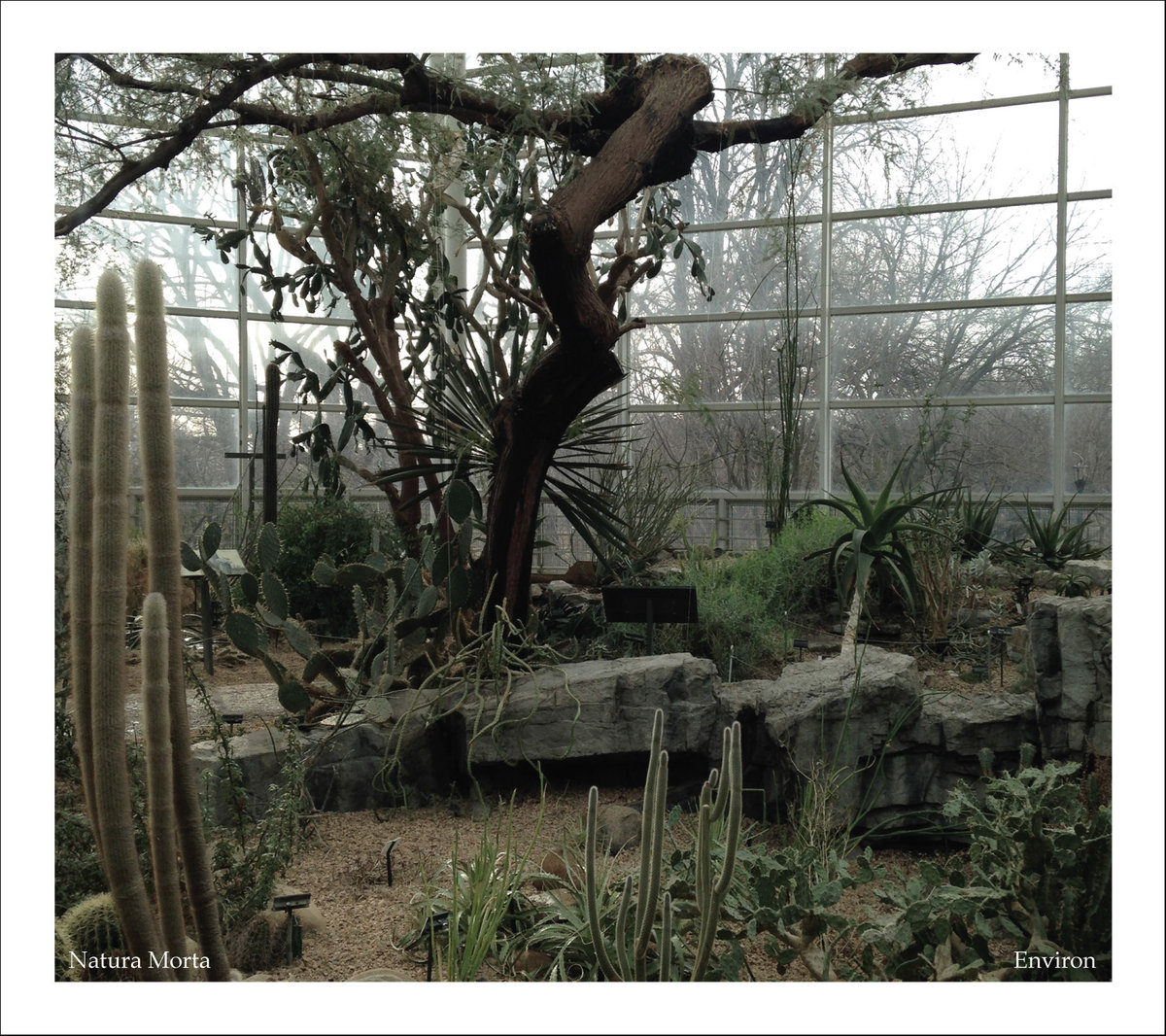 Natura Morta’s Environ (Neither/Nor Records) released early this year, is a fusion of musical purity and avant-garde noise expression. Environ is pure in the way the band works with a limited amount of instruments to create such a wide range of sound. The album features Frantz Loriot on viola, Sean Ali on bass, and Carlo Costa on drums/percussion. There is a simplicity throughout the album; a product of three musicians and their stripped-down sound. While each instrument is discernible, Natura Morta reconstructs conventional sound and creates a kind of wild landscape, where we hear the strings and drums morphing into abstracted forms. Here, a strumming of the bass changes to a vigorous scraping and soon we begin to question whether we are still listening to the same instrument. Costa’s drumming on the album creates a similar effect. I couldn’t help listening to Environ and thinking about one of my favorite modern art museums. The textures of noise, producing a sense of complexity in its usage of basic musical elements remind me of the art at Dia Beacon (in Beacon, New York). Each piece is minimal in the application of color, line, and form, but the entirety of the museum commands such dramatic force in the way our senses are impacted. We see a vast and open gallery, filled with only natural light, and large sculptures, light installations, and paintings. While the pieces are completely unlike each other, their arrangement is powerful when viewed all at once. Environ works in this way too. The album is textured in a similar application of minimalism.

“Pulvis” opens the album, beginning in a kind of race. As strings mimic steps, we hear a hurried crawl interrupted by a distressed screeching comparable to a reel being wound. After 4:30, we hear a steady “dripping” which turns into a rushing of emptiness. We do not know what creates this silent noise breaking through our ears; a minute of soft scratching. This progresses to a synthesized, almost dystopic impression of chimes angrily moving in the wind. After the eleven minute-mark, we hear “beads” rattling, most likely an exercise on the drums. This sound lingers until the track ends with a slow drum beat and flick of bass strings. “Ventus” follows, drums galloping through the first few minutes. The track has a sense of organization in the way the instruments work together. One element is predominant  and then fades out to allow the next sound a space to command the listener’s attention. “Environ” implements a musical grating throughout the entire album, and the scraping noise, present on the first track, is also a significant element of “Ventus.” The percussion is heavy and slow, developing a rhythm toward the song’s conclusion.

Environ’s final song, “Mycelia” (not including the digital bonus track) brings the album to a solid end. Each track is unique in the sounds produced, but the album also has a great sense of unified structure. The song’s use of instruments creates a similar synthesized sound as the other tracks. What I enjoyed most about this one, was the band’s ability to imitate spoons hitting glasses and running along smooth surfaces. The texture of sound was most apparent on this track, as the opening begins with imagery of glass and metal, and quickly gets rough with the flitting of strings and fingers moving against them. At 6:00, we hear something like a horn. This is most likely more string distortion. The album is wild, and I feel like I am standing in the earth barefoot amongst animals moving about. Sounds of crickets and small bugs buzzing in the night fill the air. It feels savage and intriguing. We are flooded by Natura Morta’s ability to mimic rain, rushing over us, as “Mycelia” comes to a silent close.