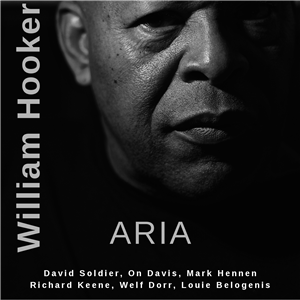 William Hooker has been playing on the New York scene for many years. I first heard about him not long after I returned to New York City in 1973. I had been living in Boston, playing with David S. Ware’s band Apogee. Ware met Hooker at some point and recorded on one of his earliest record releases, …Is Eternal Life. Moving forward to the present, Aria: The Italian Project, is Hooker’s latest offering.  I found this recording very uneven. The way the songs are put forth, listeners will have to decide what they make of it. Every musician that plays free jazz is a symbol for their method of how to play this music. Nearly all musicians have philosophical ideas, which accompany their music methodologies. This can be good or bad. As one nameless record producer shared, “Marc, sometimes, there’s more philosophy than there is music!” I was amused by his comment but I recognized the truth of what he was saying.

The first track, “Improv I,” opens with a repeated piano figure. His sidemen do little improvising during this interlude. Everything is centered around the melodic motif. Hooker’s poetry recitation follows shortly. He is one of a few jazz artists who uses spoken words with his musical presentations. On Davis is right at home in this setting as one of two guitar players. His sparse use of chords, allowing them to linger throughout this song, is highly effective. The spoken word parts serve as prelude to the drum solo that’s up next. Hooker’s drumming is very articulate throughout this album and he dominates the improvisational space on the opening piece while maintaining tight control over his bandmates’ output. The rest of his bandmates stick to the main theme and thus they are not drawn into the spider web he creates on the drums. It’s almost as if we’re listening to two groups performing simultaneously. Each is doing their own thing.

Track two, “Selfcommunion,” continues with the same piano riff we heard on “Improv I.” This is a very short track, echoing the opening theme repeatedly, like the Miles Davis song, “Nerfertiti.” Track three, “Clowns,” opens with a beautiful Italian melody on saxophone. The song is quite melodic, almost like a song one might hear in a movie. The ensemble playing supports the strong melodic elements. There’s no dissonance anywhere to be found on this piece. It’s a straight forward melody that’s well-played by the members in the band.

Track four, “Funiculi Funicula,” is a well-known Italian song. Most listeners will recognize it immediately. Dave Soldier’s interpretation of this song is spot on. He does an excellent job phrasing the melodic lines. He is joined by On Davis, who brings a bluesier treatment to Dave’s straight-forward playing.

Track 5, brings us to “Improv II,” with the same piano riff we heard on “Improv I!” Hooker jumps into his poetry briefly followed by loud drumming, touching base on African and free jazz drumming. This time, the band goes into a frontal attack! This doesn’t last long, as the group returns to the main riff. Hooker uses displaced accents to highlight portions of this piece. He is joined by Soldier, this time on violin.

Track six, “Sante Lucia,” comes across as a piece Jimi Hendrix might have done. It’s a very experimental electric guitar showcase! On Davis is joined by Mark Hennen on piano, a longtime associate of Hooker. This piece is free but it’s not anything I’ve previously heard. Once Soldier joins in the mix, it’s get even more convoluted. Hooker climbs aboard applying a steady beat with the bass drum, pushing the band in a new musical direction.

Track seven, “Epilogue,” begins with a similar drum beat as was used near the end of the previous song. This time, Hooker plays the beat much faster without the use of his bass drum. It’s a variation of what metal drummers call “blast beats!” The saxophonist plays a slow melody while Hooker is executing this rapid pace which eventually isolates into a duo between the two instruments. Hooker is in the fast lane and does some of his best drumming on this piece.

Track eight, “Improv III,” provides yet still, one more take on this song. Hooker’s drumming is the main attraction this time around. There’s an additional sustained guitar chord plus Soldier on violin. This interpretation is much looser than the previous versions. Towards the end, Hooker adds some spoken word.

Track nine, “Clown (Alternate)”, revisits this song. The melody is quite nice. The band dominates with lots of melodic support, while Hooker chooses to rumble on the drums in the background. My sense is they’re trying to play the song free but the melody won’t let them. Some songs don’t lend themselves to a free approach so easily. The band wisely chooses to let the song end after a short musical excursion. As I said at the beginning, this recording sounded uneven to my ears. I would have preferred to have heard more songs as opposed to hearing multiple takes of the same tunes. William Hooker fans will enjoy this recording, his drumming has never been better.