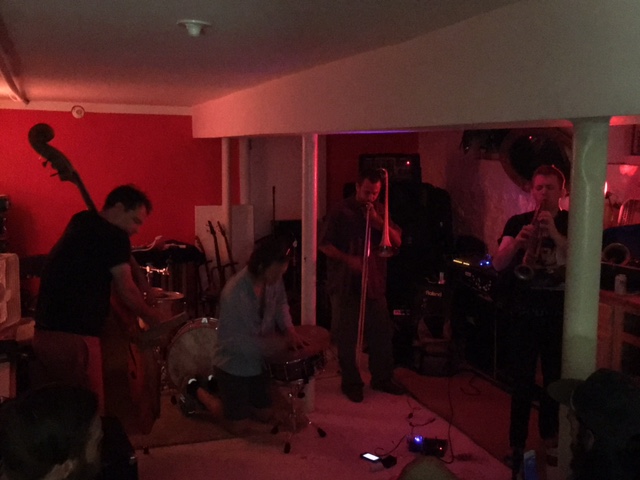 The band While We Still Have Bodies (WWSHB) had an inspiring performance at underground Brooklyn venue 49 Shade on Thursday, August 10. On that humid evening, the place was packed with fans and musicians, a collection of people hungry for the cutting edge of the improvised music scene. The band is comprised of four forward-looking innovators on the scene who have been major figures on the Brooklyn scene: Michael Foster (saxophones, electronics) has emerged since 2012 as a bold artist leading his band, The Ghost, and co-leading New York Review of Cocksucking; Ben Gerstein (trombone, radio tuner, tape), an avant-garde legend since the late 1990s, a true visionary; Sean Ali (bass), an inventive free improviser with a unique sound; and Flin van Hemmen (percussion), a vastly under-appreciated player who plays all sides of the drums. The band draws its name from a conversation between Foster and Ali about the urgency involved in making music “while we still have bodies.”

On this night they began by playing long airy notes as a way of calibrating their collective sound. Friction in the air, strings, the thin sound of cymbal, these all came, like out of the far corners of existence, moving towards a cosmic center. Then, as the collective wave rose, they began hitting and connecting with one another. Industrial screams, grating, the sound of contact between objects, the clang of metal on metal, of wood scraping across metal, of abrasion.

The aesthetic meeting place of WWSHB is in places and moments of dissonance. One to three band members create hollows for the others, then the remainder fill or cut across that space. The reason this band does this so well is that each member of the band can fill any role in the process due to their adept use of extended techniques. They aren’t afraid of accident, collision, spill, or overflow. It’s as if the hollowers set up the canvas for the others to throw paint at, then they shift roles, and the hollowers are now the paint throwers.

The hollows can come in sustained drones, long low open tones, slow booming strikes on drums, or deep slow-bowed bass which creates a collective buoyancy. Nobody is left behind, they stay afloat together, sustaining their musical organism. The players form the four limbs of the ensemble, each contributing to the survival of the whole. Foster, Gerstein, Ali, and van Hemmen are all masterful listeners both to themselves and their collaborators. They don’t have to dictate anything in advance because they hear each other so intently. Due to this, and their years of now playing together, While We Still Have Bodies manages to form profound narratives collectively in the moment like few other bands playing the scene today.