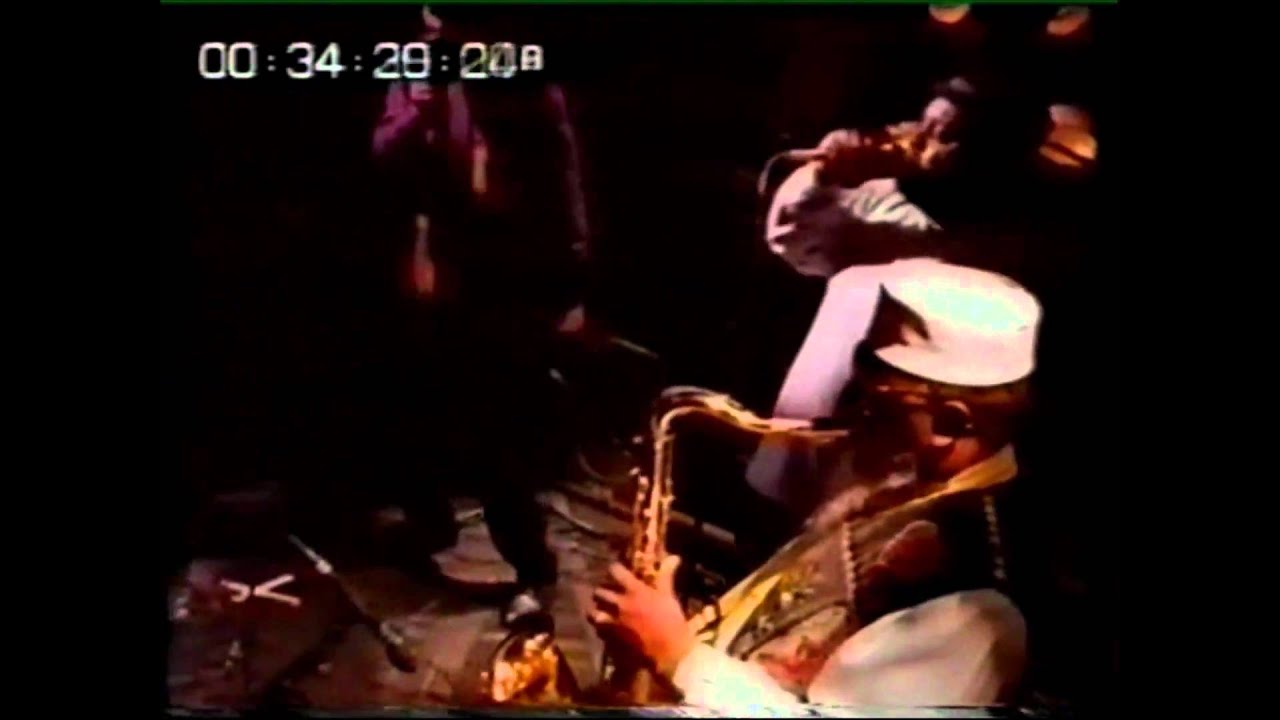 According to the Center for Disease Control, somewhere between the years of 1988 and 1990, the rate of HIV-AIDs infection among African Americans first exceeded those of whites and would remain so until today. At the dawn of the 1990s, Black america would find itself in the midst of a full blown health crisis with dire implications. Catalyzed by a lack of sex and health education, a deep social stigma around the disease and an administration that simply did not cart, these variables would come together to create a perfect storm that would effectively destroy the lives of countless people. Coupled with the fact that american cities were still reeling from the impact of the crack epidemic, the HIV-AIDs crisis of the 1980s and 1990s presented Black America with one of its greatest challenges in the post-civil rights era.

Enter the Red Hot Organization, a non-profit, formed by former lawyer and educator John Carlin for the purpose of utilizing pop culture to combat HIV-AIDs. The organization would go on to produce a number of renowned compilations and films that targeted specific demographics that were struggling with what was developing into a worldwide pandemic. Setting it’s focus on the African American community, Red Hot sought to produce a compilation that paired contemporary Hip Hop stars with Jazz legends of the past with an accompanying film to be aired on Public television. Earle Sebastian, a young filmmaker from South Africa, who had moved to England and cut his teeth in London’s storied Acid Jazz scene was tasked with assembling the artists that would participate in the album and film, Sebastian got the project rolling by stepping out on faith and receiving an unlikely stamp of approval from a Jazz legend.

“We first went to Pharaoh Sanders and it was so easy to get to him, we found him in the phone book and we went to him. He invited me to his home, we had tea and he said ‘alright, I’m down.’ I went to the Last Poets and a similar thing happened, invited them to my place and there was a trust there and a belief that something was going to happen.” Upon securing these commitments early on, Earle and the Red Hot team began putting together an album of collaborations between older Jazz musicians and younger Hip Hop innovators of the day.

The resulting album, Red Hot And Cool: Stolen Moments is a shining artifact of its time. For the first few years of the decade, there were countless artists, many of whom are accounted for here, who were experimenting with the fusion of Jazz and Rap. Hip Hop DJs and Producers made their bones by transmuting the uptempo rhythms and horn stabs of James Brown and funky rarities compiled on the notorious Ultimate Breaks & Beats compilation series into countless Rap cuts throughout the 80s. As tastes changed and Rap grew as a commercial force the demand for source material to sample had deepened and intensified. As many artists turned to Jazz whether Bebop, Free, Hard Bop, Latin, Fusion and beyond for samples, they would pair these sounds with heavy breakbeats and lyrics that reflected a broad social consciousness and, at times, a more nuanced set of political views than most of what was available in mainstream pop culture. This boom of Jazz-tinged Rap music dovetailed beautifully with a wave of Black, cultural and political consciousness that swept through the U.S. at the time. A bright, colorful world of nappy-headed kids smoking Beedis, rocking dashikis in the summer, HBCU hoodies, and timbs in the winter. Independent Black vendors on Germantown avenue in Philly or 125th Street in Harlem selling Black soaps, incense and Farrakhan speeches on cassette. This wave was felt in Spike Lee’s early run of feature films, Do The Right Thing, Mo Betta Blues, and Malcolm X, TV shows like A Different World and in the music of De La Soul, A Tribe Called Quest and the Native Tongues collective. All of these elements coalesced to form a distinctive Black youth culture in the 1990s that had deep ties to the past. Red Hot And Cool is an important musical snapshot of what it was like to be Black in America in the early 90s. The accompanying film provides an even deeper look at the social, political and cultural state of Black America at the time.

Sampling and the re-purposing of cultural artifacts from the past was not limited to the studio. During this time, young people were embracing and drawing power from the ideas and iconography of the Civil Rights and Black Power eras that had come before them in the form of Malcolm X-branded hats and t-Shirts, as well as the increased interest in scholars and activists like Frantz Fanon, Angela Davis and more. This, coupled with the interest in Jazz that had been generated by Hip Hop, had helped to create a mass inter-generational dialogue. Earle Sebastian’s film Red Hot + Cool: Stolen Moments is a product of this important cultural moment. Centered around a desire to document the collaborative live performances from the album on film, the documentary is packed with leading lights from the worlds of Jazz and Hip Hop; Donald Byrd, Ronny Jordan and GURU of Gangstarr, MC Solaar and Ron Carter, The Roots, The Pharcyde, Pharaoh Sanders, Meshell Ndegeocello and many more.

“Through the collaborations that were going on, we decided to do a live show in New York with all of those artists together on a stage. But for me all the pieces around it, the explanation of Hiv and Aids was all new to me,” Sebastian noted. “I didn’t want to make the piece feel like like the obvious educational piece.” He added, “It became this nonlinear piece in my head that was kind of fractured. And that’s how the film began to look and feel like it did,” speaking to the film’s origin and gritty, cut n’ paste visual style. To achieve this vision, Sebastian reached out to cinematographer Kevin Kerslake (Nirvana, The Smashing Pumpkins) to help imbue the film with a grimy punk-inspired visual feel. Filmed over the course of 8 weeks, Sebastian and his crew made a mad dash around the streets of Harlem, capturing compelling footage of Black life on the street.

One of the most powerful voices to appear in the film is that of HIV-AIDs activist Louis Jones. After being diagnosed HIV positive in 1986, Jones seized a boarded up, abandoned brownstone on 143rd street, converting it into Stand Up Harlem House, a housing and support center for people living with HIV-AIDs. Rejecting the stigmas faced by many in the community, he proudly asserts; “I didn’t do any wrong. I love myself today and I affirm that. I love my feet, I love my eyes, I love my nose, I love my body. I’m not a walking disease.”

Speaking on the need to illustrate the deeper connections between the music and the real-world struggle that informed it, Sebastian remarks; “I realized that I have to make some kind of cohesive sense out of everything that was being asked of these individuals. How could I make sense of what I was doing?” Throughout the film, he cuts between the live performances filmed at the Supper Club on 46th Street in Manhattan and several interviews.

Alternating between the performances and interviews conducted with musicians, activists and intellectuals, Stolen Moments’ structure itself plays out as a visual metaphor for Black art in america. The gems dropped throughout these interviews peered deep into race, gender, sexuality, healthcare, religion and politics. The film gives ample time to the discussion of these issues making clear that while these issues raged throughout the world outside the nightclub, they were still indissolubly linked to the magic on stage. Activist and philosopher Cornel West issues a challenge to Hip Hop to realize its potential by shedding its toxic messages and engaging with a deeper vision of human empathy. “In Hip Hop you have a variety of different voices. You have some progressive voices and you have some voices that are downright retrograde and reactionary that reinforce the same homophobic stereotypes and the same misogynist stereotypes, but it’s important to highlight the diversity. I think it’s a challenge to young artists in Hip Hop culture to represent the best of the Black freedom struggle which is to stay in contact with every member of the Black community which allows you to stay in touch with each and every member of the human family.”

West’s challenge not only hints at the continuity of the Black aesthetic and politic, it also speaks to the existence of a deeper Black social and historical connectedness through joy, creation and struggle. For some viewers, the positioning of Hip Hop and Jazz alongside conversations about race, sex, gender, economics, politics and health may seem daring and potentially confusing. On the other hand, Stolen Moments and it’s scope makes perfect sense if you happened to be Black and living in America at the time. Stolen Moments not only represents an artistic “reach across the aisle,” it also crystallizes a significant moment in time where Hip Hop’s fascination with the past (through sampling and crate digging) had opened up a unique cultural space where the history of Black music and politics could be brought to the forefront. This resulted in an inter-generational dialogue that has been difficult to replicate since. By integrating the voices of some of the great living artists of the past with those of the present, Stolen Moments exists as a powerful work of art that serves a similar purpose. Whether in song or in speech, the film relies on the experiences of artists and the community at large to articulate the desires and challenges of being Black in America.