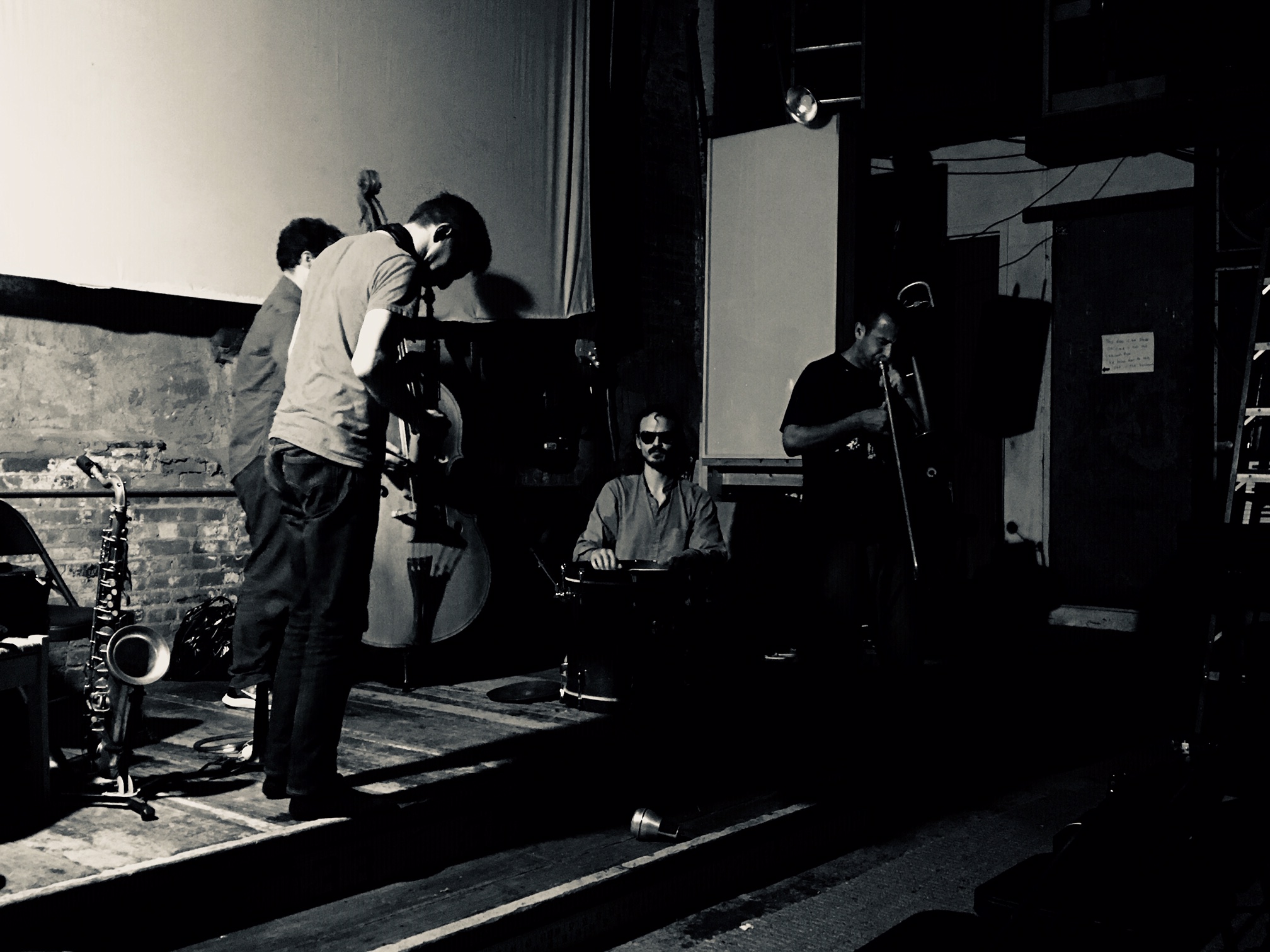 While We Still Have Bodies is one of the most developed freely improvised ensembles to emerge in Brooklyn over the past decade. This band is comprised of Michael Foster (saxophones), Ben Gerstein (trombone), Sean Ali (bass), and Flin van Hemmen (drums). As stated, their music is entirely improvised and each time I have seen them play it has been completely different from every other performance. I first saw them when I booked them for the series I curate, New Revolution Arts, in November of 2014, and I have watched them evolve over time through a series of live performances and a record released last year on Neither/Nor Records.

There music is a kind of otherworldly music, drawn in from the peripheries of existence, but tethered and placed at the center of our vision. It is ephemeral and bold, and in each performance a multitude of sonic universes are born meteorically and die just as quickly.

Foster opened the night with wet sounds issued from his soprano saxophone and noises from the balloon that he characteristically attaches to mouth of his horn. Van Hemmen, meanwhile, drew out peripheral sounds of his own by scraping the snare on the floor while Ali issued creaking sounds from his tightly bowed bass. Gerstein added airy sounds from his trombone.

As always, this band opened a space of liminal sounds drawn from scrapes, abrasions, physical contact between their instruments and the floors, walls, or doors of a venue, or from using instruments in an variety of unusual ways that collectively produce a fascinating musical organism. The collective part is the thing that they have refined over time–without any preconception, this band sets out into the unknown and always take the audience along for a fascinating journey that leaves them changed. Together, they create a new reality in their music, one that stretches the traditional bounds of the known.

The initial bustle grew into a magnificent chorus of the sounds of New York, the grit, the ignored, the sounds our ears normally tune out, from the ordinary, the gray, but somehow they mustered in this a magnificent choir of defiance. Once they reach a sonic peak through relatively quick evolution, they let the entire thing dissolve and then they start again, building towards another peak. It is in the dissolution that the genius of their work emerges–they collectively formulate their next aesthetic frontier and begin moving towards it. Seeing this happen without a dominating voice is a rare thing, and one of the most striking things this band accomplishes as they perform. In this instance, new sounds emerged, moving away from the liminal approach they had at the outset, acquiring more body, substance, and robustness to them. Then they grew reaching a second cacophony.

After dissolution, they began working on their third sonic sculpture, now with barely noticeable drones with Foster working counterpoint fluttering on soprano. The music felt throughout like an act of communal living, as each contributed a sound or an aesthetic or an idea, then others wound borrow or share or follow, or choose to play counter. At one point, this found them exploring the deepest possibilities in their respective instruments with Ali bowing an open string, Van Hemmen rolling the bass drum around to produce booming resonance, and Foster with airy sounds that formed an aesthetic counter and eventually arched into hissing from Foster that shifted to hissing from Gerstein. Then dissolution caused all to fall away to just Ali’s bowed G-string. While this band displayed innumerable innovative ideas with their instruments, refreshingly it never felt like they did it for the sake of demonstrating technical facility; instead they did so with the conviction of employing these techniques to push themselves ahead further into unknown territory–towards building an aesthetic together.

In another riveting moment, Gerstein produced a series of interesting sounds by bouncing his trombone slide off of Van Hemmen’s snare right next to the drummer playing his bass drum with a cymbal stacked on top. In this, Van Hemmen and Gerstein provided the movement, the disruption. Ali added buoyancy while Foster contributed the noise, the physical contact of the music. And from there they built again–up, up until it could go no higher, then they let that sonic organism die so that another could emerge from its ashes. There is constant life, death, and rebirth in the sound of While We Still Have Bodies.

This time it dissolved down to Van Hemmen hitting metal objects on his bass drum producing small explosions, sharp accents that quickly evolved into warm abrasions produced by Ali and Gerstein that flowed and enveloped one another. All of this melded together just as Foster emerged with wild, wavering pitches and then he re-submerged into the group sound. From their, they unfolded their most gentle dissolution of the night that ended with the clicks and airy bursts of Foster’s mouthpiece. 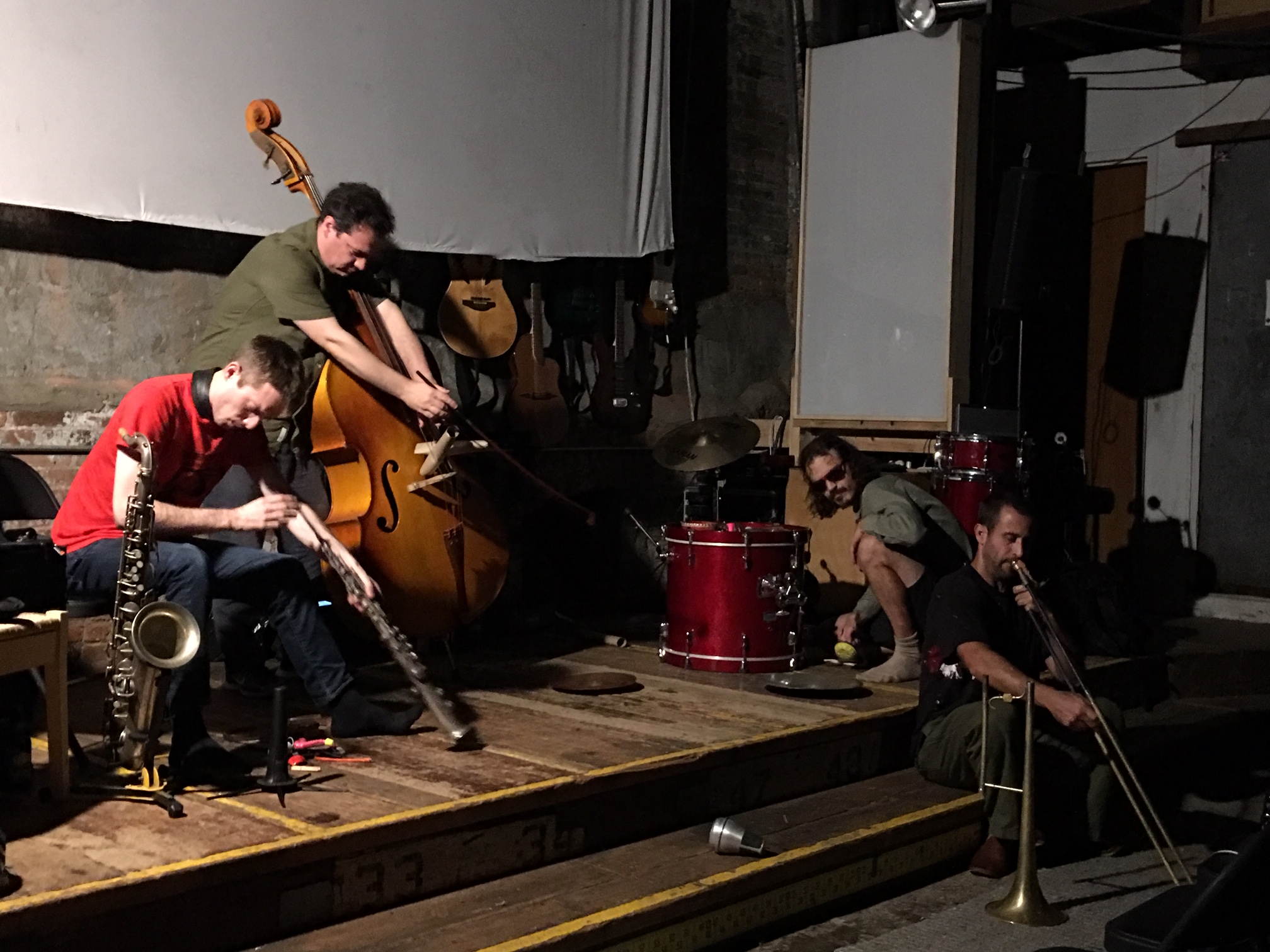 I had the opportunity to see While We Still Have Bodies perform about two weeks later at Spectrum and it made me reflect on how much their sound is impacted by the environment in which they play, since they are constantly interacting with it–the floor, the walls, doors, and each other’s instruments.

Again, the music began organically and felt, from the beginning, to be otherworldly, though at the same time, hyper-connected to physicality of this world. The opening featured prerecorded sections of bird calls and rushing water, flat metal gongs, eerie scrapes, and the bass drum rolling back and forth on the floor. Then, after they patiently let the various components of the music be on full display as individual entities, Foster’s bubbly play finally gave the group a cohesive energy. Airy bursts, the crinkle of thin metal, and fast tonguing of saxophone by Foster pushed the energy level higher before it dissolved down into rich, deeper tones.

From there forward, I witnessed them explore darker tones more than ever before. Bass upside down with soft strumming on a stick stuck between the strings shaped the entire mid-section of the piece, while Foster hit quick strikes on his horn, Van Hemmen used his feet as extra percussive devises, and Gerstein issued dissonant electronics and feedback from his trombone. Gerstein eventually scraped the bell of his horn on the wall to willfully collide with the room itself. At times, Ali provided stability with low, single plucks on bass while the others pushed themselves to the brink.

After another climax and dissolution, Foster shrieked on tenor, while Van Hemmen had his bass drum turned sideways while he employed mallets and cymbal to create the top and bottom of the possible tones. Ali kept an almost walking bass line propelling everything while Gerstein used his trombone to create vibrations against Van Hemmen’s floor tom. All of this died down to low rattles and mournful howls.

While We Still Have Bodies is one of New York’s superb fully-improvised units. Catch them while you can.