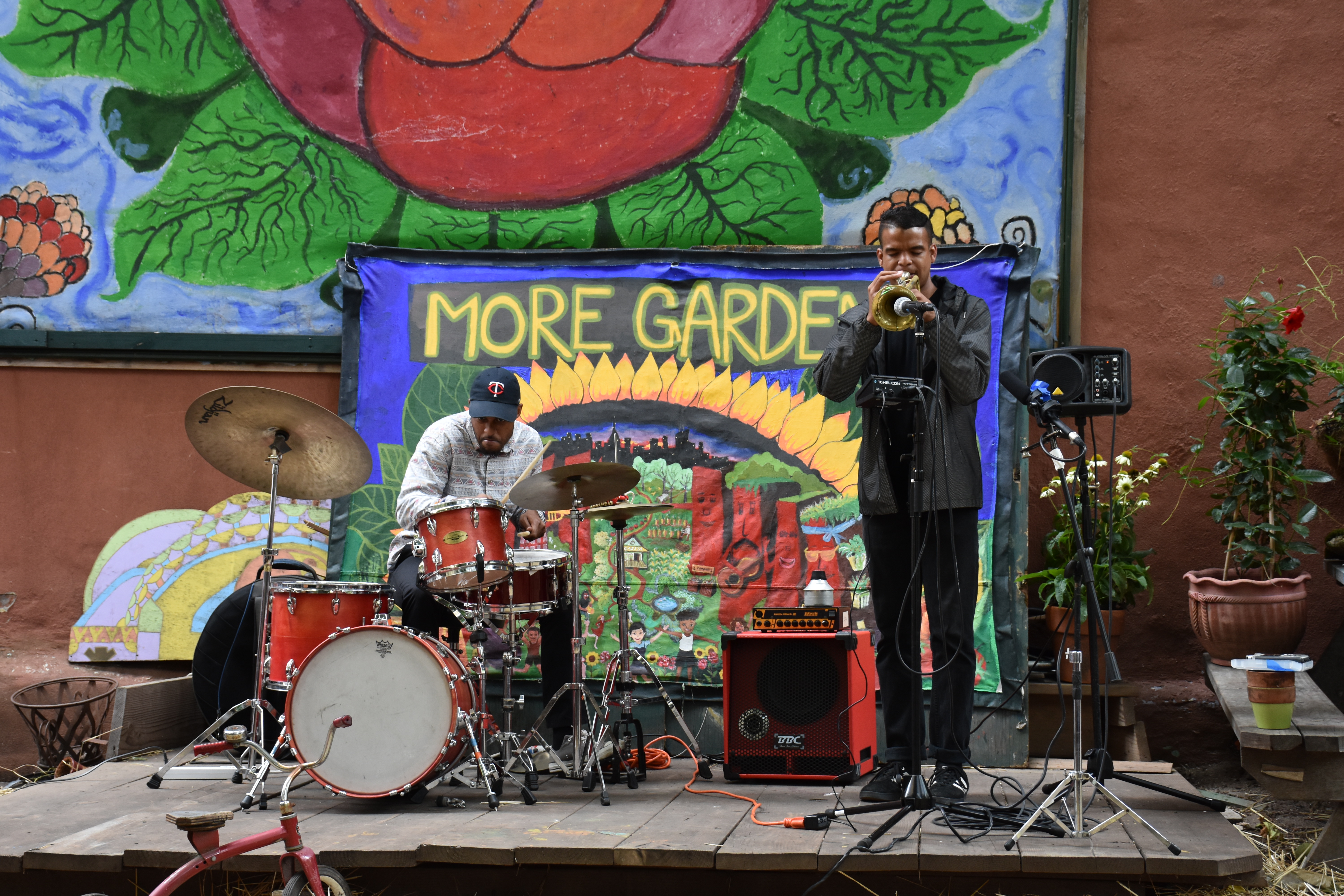 I have been familiar with trumpeter Aquiles Navarro and Tcheser Holmes for several years now. Their work in Irreversible Entanglements, a quintet featuring Moor Mother, Keir Neuringer, and Luke Stewart, has seen them touring internationally since 2016 and releasing one of the foremost records of 2017. Navarro and Holmes have been working on their duo project for even longer and have developed an instinctual connection that deserves attention. They were featured in September as part of the In Gardens series sponsored by Arts for Art.

Holmes opened with a snare roll and solo that served to built anticipation for Navarro’s entry that mirrored the same aesthetic with drones. The two melded for a few moments, then Holmes led the way creating a varied landscape which Navarro navigated deftly. Navarro conjured up some rather mournful lines, at times, with wavering, vertical moments that dissolved into horizontal plunges. Navarro had the ability to create and undercurrent of dark energy that surged and swayed in contrast to the sharper sounds of Holmes’ kit, though Navarro, at times, would surge to form the white caps of the tremulous waves that formed from the percussion.

In another juxtaposition, at one key moment, after a furor of drums, they dissolved to reveal Navarro playing quite rhythmically. Then Holmes returned, incorporating Navarro’s rhythm in his own. From there, Navarro’s trumpet lines moved into smaller and smaller sounds that once amplified allowed him to explore noise possibilities while Holmes played an aesthetic counter with regular rhythms. The first piece ended with fading bass drum beat and a whistle from trumpet.

Navarro began the second piece with a direct exclamation that announced a new direction, backed soon by rolling drums, that elevated the arching, confident calls on trumpet. Growing thunder on drums worked brilliantly with brightly illuminated trumpet lines. Navarro evolved his sound into melancholic and mournful lines that simmered over more rolling thunder that kept light and dark in equal measure as they contended with one another to conclusion.

This band is one of wonderful contrasts and moments of coalescence. Through much of the set, the two practiced the pure art of improvisation: acting and reacting, working through the surprises that each player threw at the other in creative and innovative ways. Their music is fresh and free sounding, open and vast in possibility.