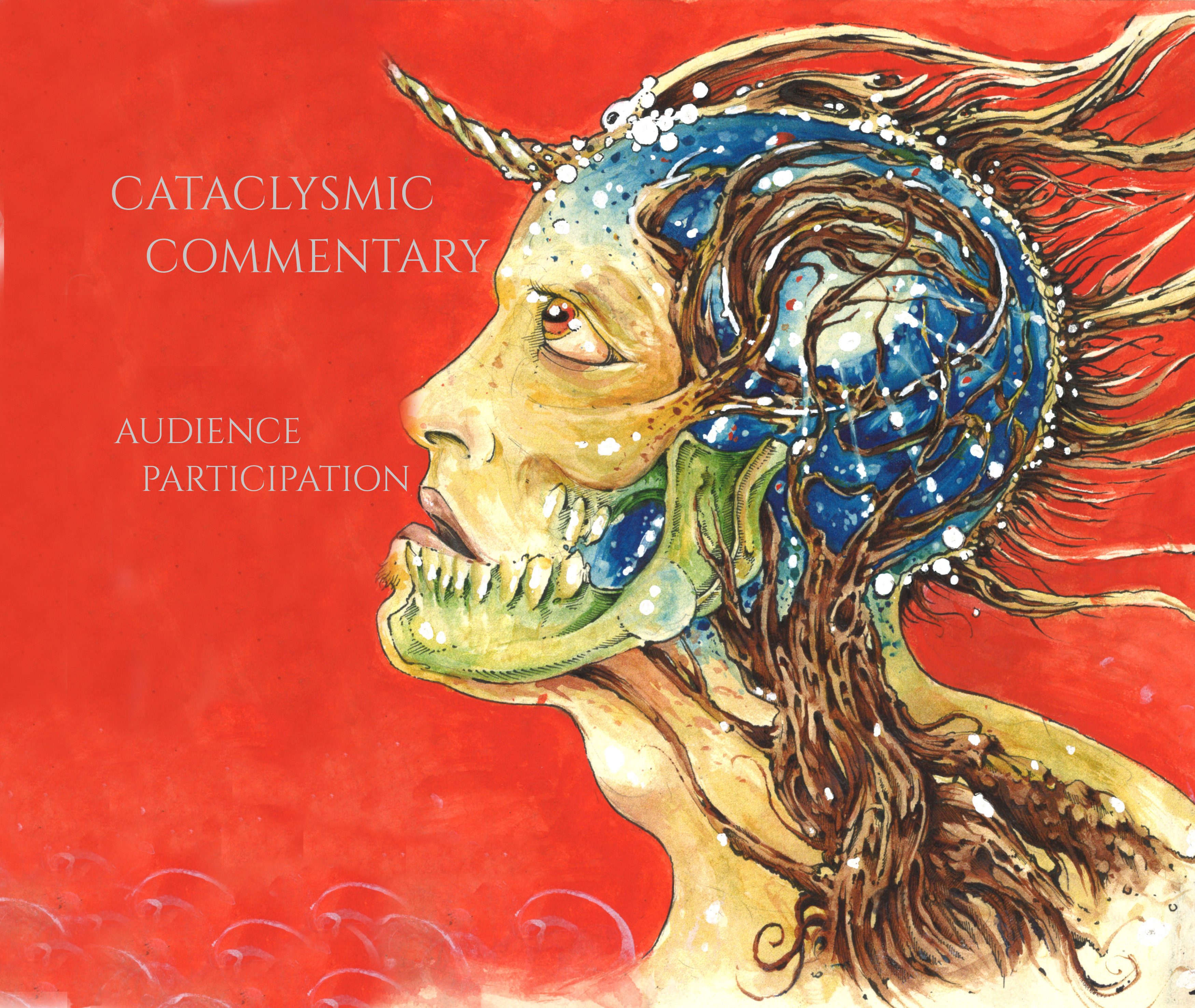 Hit ‘play’ and the first track on Audience Participation is consistent with its name. Cataclysmic Commentary’s debut record was released in March. The band is comprised of Ben Cohen on saxophones, Eli Wallace on keyboards, and Dave Miller on drums. “Surprise Kitten Explosion 5000” draws us into a space of free sound, wild and vibrant. Sound spirals out quickly. We are challenged to follow the movements we hear as each instrument creates such a dynamic range of sound. The second track does not force us into the listening experience as immediately as the first. “Nun Oil” has moments which resemble a more classic style of jazz, until the saxophone and the piano become charged and sound like they are playing tag with the other. This feeling continues into “Mean Knees.” I feel an increased sense of anxiety trying to keep up with the scurry of keys and sudden high notes on the sax.

I love “Crowded in Solitude”. The track is slow and we feel the intensity increase as the high hats vibrate behind the piano’s drawn out notes. The piano adds an element of sorrow to the tone of the track. We hear short bursts of wind move out of the saxophone, accompanied by soft tapping on the drums. I was particularly interested at the 1:50 and 3:10 minute marks. Both moments are almost frozen still in their attention to subtlety. I only feel this “crowding” of “solitude” when the piano hums. I am reminded of our old grandfather clock when I listen to this track. The clock keeps time downstairs and I only hear its short song in the dark of the night when I struggle to fall back asleep. Similarly, the piano sounds as if it is also keeping time.

“Ode to Ella” whines and scratches as it unfolds. Once again we hear the saxophone create a softer tone; a kind of rasping whisper that I find myself following throughout the track. The piano seems to play against the sax. It sounds like keys are chasing each other. I felt this to be a prelude to the following, “Texas Chainsaw Focus Group” which crashes through the speakers violently. As someone who greatly appreciates the original Texas Chainsaw Massacre, the title is fitting and accurately describes the tone of what we hear. It is panic-inducing and wild. I also really enjoyed “The Last Time You Used a Real Map.” The percussion and saxophone both compliment and work off each other’s energy. There is a pulsating rhythm throughout the track that grows heavier and faster until it begins to unwind around 3:40. The final two tracks on Audience Participation make evident the band’s ability to play with contrast. This album feels like a study in speed and intensity of sound.