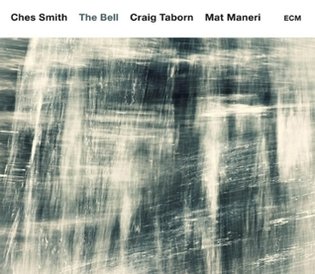 The Bell with Ches Smith on drums, vibraphone, & timpani, Craig Taborn on piano, and Mat Maneri on viola, explores a softer dynamic range than most trios I have heard recently. The opening sound of a bell, gives way to Taborn doing a series of soft vamps on the piano that gradually create a quiet vehicle for the trio’s improvisations. Maneri’s sparse playing on this composition is quite effective creating something out of a dream, a mood that we do not normally encounter in our waking state. This is a meditative piece, different from what we hear in most contemporary music. Taborn’s playing not only adds to the simplicity of this space but gives the musical clay the shape and form it needs. Smith almost disrupts the space with his timpani playing but it is an interesting contrast to what his band mates are playing.

“Barely Intervallic,” continues with engaging layers of soft dynamics. Most trios tend to be of the power variety producing loud sounds. That is decidedly not the direction this group is exploring. The music is gentle as it washes over the listener’s ears. It is very easy to take in. Taborn is reminiscent of Matthew Shipp on this song. Maneri plays beautifully over the soundscape created by Taborn’s playing and Smith’s soft drumming and the latter’s use of the vibraphone.

“Isn’t It Over?” follows, without missing a beat. The moment this song gets under way, the trio changes gears and their playing is much more forward! Now the music becomes much more engaging in a way that most audiences expect. The songs on this album are like chapters of a book. Unlike a book, the music moves into slightly different territory while maintaining the integrity of this soft, slow meditative space. Overall, this album is somewhat similar to a sound track for a motion picture or even a documentary. The percussive rhythms that Smith plays during the latter part of this song is quite effective providing a slightly different back drop for the improvisations. I like the way Ches changes from African rhythms to playing an almost rock like beat behind the band. It is gentle and pushes the band forward in a non-invasive way. The vamp picks up in intensity without the band losing sight of the dynamics. The song builds and builds until it comes to a complete stop, ending the proceedings, bringing it back to the original theme we heard at the beginning.

“I’ll See You On The Dark Side Of The Earth” has a very different feel, one that is hard to put into words. It does remind me again of atonal music or rather classical music with an abstract flavor. The slow pulse gives way to another slow rock orientated beat. The music is very engaging when the trio enters this mode of playing. It is quite striking how all three musicians work together as one. It is interesting how Taborn touches base on the theme of this album, mimicking bell-like sounds near the end of the song.

“I Think,” opens with more bell-like sounds from Taborn, whose playing throughout is excellent. He is joined by his band mates and they help define the shape of this composition. Smith is heard on vibraphone playing eerie chords softly in the background, while ideas revolve around Taborn’s themes on the piano. The latter remains the anchor while Smith and Maneri are free to go in and out of the main theme and the strong pulse. “Wacken Open Air” opens with more abstract improvised playing from the trio. The music is very free flowing according to the musicians’ intention, while maintaining a sense of structure. Again, it is not loud at all. Smith’s use of cymbals near the end of this song provides more contrasts in the sounds,  bringing this song to a close.

“It’s Always Winter (Somewhere),” continues in the spirit of the entire album with more soft dynamics and melodic themes, that the trio defines in their own way. There are times when the music on this album evokes memories of Chick Chorea’s Return To Forever, especially on this track. “For Days,” explore more of what we’ve been hearing on this album. The soft dynamics and wide open space applied here, is the essential flavor of this recording, and is one worth further exploration. This record should meet an eager audience. I hope Smith, Taborn, and Maneri will continue to work towards another one.