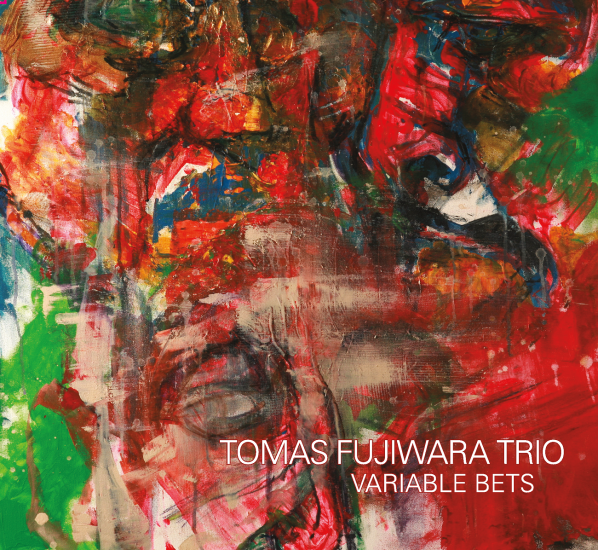 Variable Bets unveils the exciting and original sound of the Tomas Fujiwara Trio. A vital new voice on the Brooklyn and New York scenes, this band seems to have been founded on the idea that opposites attract. Some has already been said of this. In this unusual blend of characters, we have Ralph Alessi, characterized as “the surgeon” for his clean, cutting lines, and Brandon Seabrook as “the executioner” for his aggressive, explosive power. The glue to these seemingly divergent players is Tomas Fujiwara, a bold and robust player who possesses an ever-expanding vocabulary. The generation that has emerged in the new millennium is spilling-over with drum talent more than any other instrument. Fujiwara has distinguished himself within his cohort by his versatility as a player, the varied interests expressed in his unique musical aesthetic, and his overall emotional range as an improviser and composer.

A common aesthetic has emerged from the alchemical mix of this band that reveals a deeper level of connection between Fujiwara, Alessi, and Seabrook. They are bound together by a confident manner and a desire not to overplay. Throughout this record, the players boldly make their entrances, say what they need to say, and then clear the stage for the others. The sound is remarkably clean, despite some intense interaction all caught in the live setting.

Barbes was the perfect place for this recording. I remember the night–it was still hot and Barbes’ backroom tends to be an intense, intimate atmosphere not only because it is a somewhat small space, but also because the dim lighting and wall curtains augment the closed-in feeling. It’s a place to go and listen closely to music, to really absorb and feel it. September 11, 2013, was a special night. The place was packed and the crowd had a lot of energy. The audience seemed to hold its collective breath as the band played, knowing that this magical evening was going to be recorded for the ages. The music was recorded as one long suite of songs, though it is separated into tracks on the CD.

“Mr. Or in Pivot” warms up our ears to the type of sounds we are to hear throughout the record. Seabrook creates a shimmering wall of sound as a backdrop from which Fujiwara and Alessi ascend, as if from an abyss, upwards into the light. The three then, in even doses, begin making forays at each other, eventually melding together as their voices continue to rise. “Insomniac’s Delight” really sets the stage, revealing Alessi and Seabrook with their direct, crisp statements.

“November Wept I” is a subtle turn with drums and guitar creating another shimmering backdrop with Alessi mournfully out front. On “The Comb” Seabrook is finally unleashed building constantly while Alessi dances above him and Fujiwara serves as the engine that moves everything along. The piece exhibits some of the most electrifying interaction on the record.

“Harp Ran Blond” opens with an incredible drum-guitar duet where both players show off their talents as improvisers. Then it transitions into an Alessi solo where he maps out new terrain. “A Table’s Stem” sits as a centerpiece for the record at over 13 minutes, casting the characters in shifting roles. Seabrook takes a subtle turn behind Alessi’s direct, bold cuts still with the rumbling thunder of Fujiwara underneath. Then, at times, guitar takes on the role of engine, while Fujiwara shifts to vibrant accents before melding together again. Seabrook later takes an explosive turn, but never overwhelms. The three players really feel the collective energy here, producing some magnetic improvisational moments.

With the tender close of “A Table’s Stem,” the record begins to issue its farewells. “Lord Sumo” offers us a sophisticated drum solo that wastes no time or space and is not overdrawn. Fujiwara displays his talents here, then swiftly carries us into the final piece. “Nudge Storms” is filled with unsettled warmth, like the inevitable goodbye one wishes to avoid, then finally concedes.

Fujiwara and Seabrook work together throughout the record to create two interwoven sonic experiences. Seabrook, in particular, envelops us with shimmering curtains while both also release untamed energy into those scintillating fields that create whole new panoramas of sound. While Alessi adds to this at times, he often works as the counter-current that both melds and crosses the sound of the others in subtle contrast. There is a great deal of genuinely new sound here, an exciting turn for Fujiwara, representing his boldest work to date.

Jonathan Goldberger did an exquisite job as the recording engineer. This record seems to have exploited all of the good aspects of recording live–capturing the kind of energy that cannot be caught in the studio as well as the immediacy of the moment with no second takes–without any sacrifice of sound quality. I can only hope that Variable Bets will serve as an example of what can be done in the live setting and that more artists will follow suit.