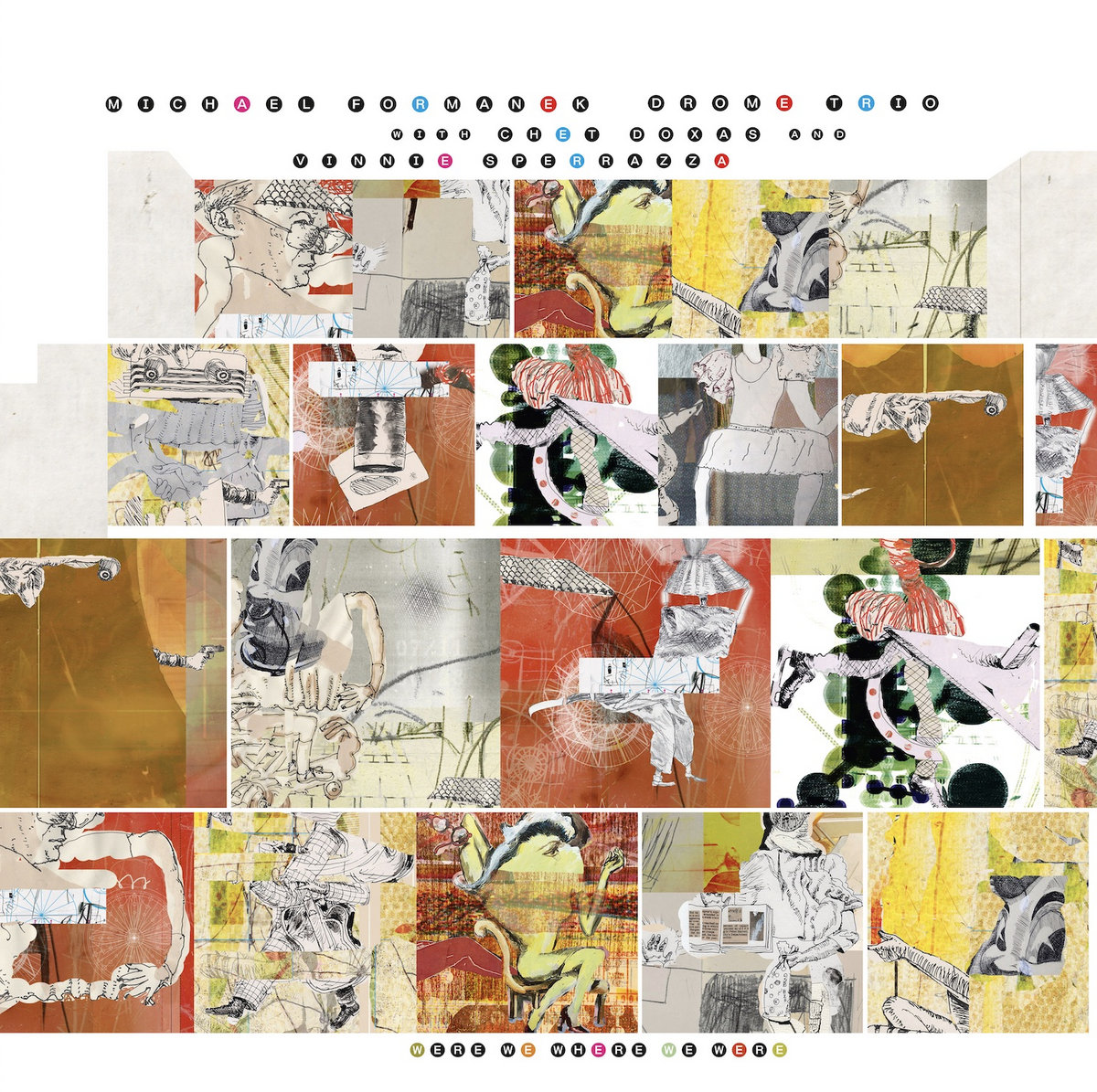 Chordless saxophone trio has always been one of my favorite band formats as both a player and listener. Compared to piano trio or quartet, there’s a great deal of clarity, flexibility, and equality between the players, allowing for subtle as well as dramatic shifts in energy and texture to be made on a dime. The format is ideally suited to the new recording from bassist Michael Formanek’s Drome Trio, Were We Where We Were (released on March 18 on Circular File Records), featuring Chet Doxas on reeds and Vinnie Sperrazza on drums. The music is derived from a series of Formanek’s graphic scores intended to be played forward and then backward, creating musical palindromes. These have been reinterpreted into fixed compositional ideas via conventional notation and suspended amid extended swathes of group improvisation as signposts, anchors, and points of redirection into new territory. Listening to music arranged in this form has always felt somewhat cryptographic – I find myself trying to find the line between composed and improvised material and decipher the ways in which one holds sway over the other. This feeling is greatly enhanced by the mirrored nature of Formanek’s compositions, whose serpentine, chromatic lines only reveal themselves as palindromes at the halfway point upon which they snake back to their starting position. Because of the smoothness with which the band moves between improvised and composed material, the appearance of this property is sometimes the only clue that a transition has occurred from the former to the latter.

Stylistically, the music feels connected to the Julius Hemphill/Tim Berne school of modernist free jazz, embodied by loose atonality and a broadly contrapuntal approach. The band’s dark and rich sound complements this style nicely, and the sonic space never feels lacking without a chordal instrument. After the 27-minute opening track “Tattarrattat,” the record settles into a more conventional jazz idiom, with deep swing from Formanek and Sperrazza supporting Doxas’ sparse, angular lines. Formanek’s bass playing – featured in an introductory solo on “Never Odd or Even” – channels a Charlie Haden-esque lyricism through a haunting, acerbic aesthetic more reminiscent of Charles Mingus. Doxas commands a wide sonic palette through distinct approaches to each of his instruments – soprano sax, tenor sax, and clarinet – lending a great deal of timbral diversity to the trio format. Sperrazza supports the band with precise modulation of feel, dynamics, and orchestration, seemingly everywhere and nowhere all at once. The fact that this trio has spent a lot of time playing together in various formats, including extended backyard sessions throughout the pandemic, is clear by the strong hookup and responsiveness demonstrated throughout.

This record feels in some ways like an isolated snapshot, a single bucket from a deep well of this band’s potential approaches to this material. I’m happy to see that the Drome Trio is going on the road – it will be interesting to see how the music develops in live performance and to hear some of the other approaches that didn’t make it onto the record.

Mat MuntzAlbum Review: Michael Formanek Drome Trio – Were We Where We Were03.22.2022