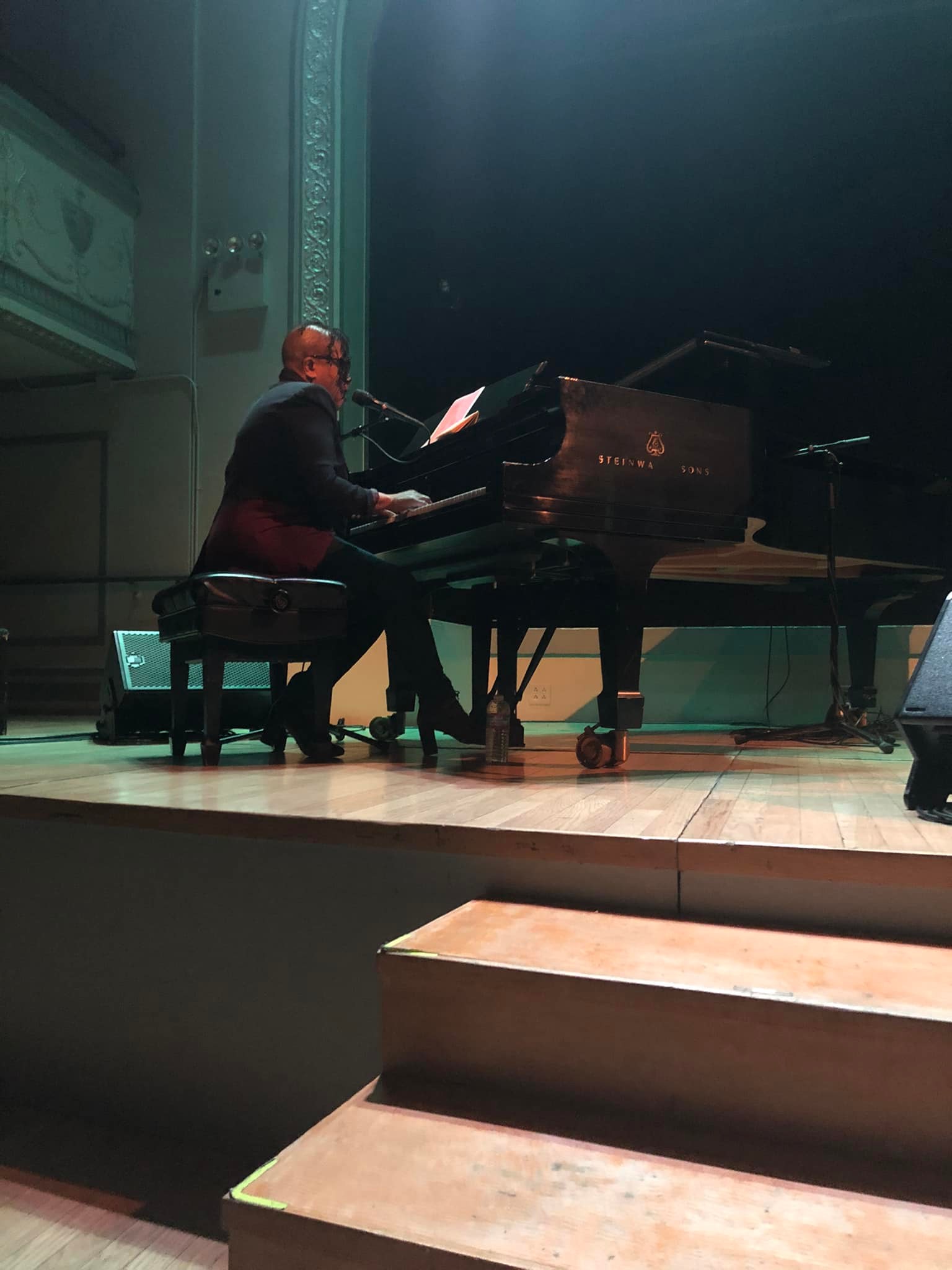 After years of co-creating musical theater pieces, as well as playing with various bands, I branched out; formed the band Janice Lowe & Namaroon, and was finally on the verge of finishing a self-produced album that had been in the slow cooker. That album, Leaving CLE  songs of nomadic dispersal, is a band performed remix of Leaving CLE   poems of nomadic dispersal (Miami University Press)–which began as a book of poems about my hindsight efforts to understand my family’s reverse migration move from Cleveland to Alabama, when I was in high school.

The musicalization of the pieces, which eventually evolved into a 1½ hour concert for octet, grew out of my accompanying myself on piano while singing or otherwise intoning poems that weren’t written as songs.

I’d recently returned from playing a show at the Lensic in Santa Fe. The Lannan Foundation hosted Tyehimba Jess, myself and an ensemble of musicians and vocalists for a performance of Millie and Christine McKoy Sisters’ Syncopated Sonnets in Song, for which I’d composed musical settings for poems from Jess’s Pulitzer Prize-awarded collection, OLIO.

Lockdown happened as I was getting close to finishing my album. The announcements came through from the mayor and governor as I was taking a walk in Brooklyn’s Prospect Park on the first day of spring.The park was packed and everybody’s eyes were glued to phones, waiting for news about quarantine. I had been teaching at Rutgers. On one of my last days before quarantine, I was getting off the train at New Brunswick, NJ and heard a young man anguished, crying. He was walking with a friend who attempted to calm him.  I overheard the two young men–most likely students, telling a Black woman who’d stopped to comfort them that someone on the train had verbally assaulted them for being Asian.This harasser blamed them for the spread of the coronavirus. I made a mental note to discuss this with my classes. Later in the spring, a student in my multimedia class created a photo installation delving into his own experience of being similarly blamed.

I had been working on the record for a long while and was getting excited about mixing it. I still needed to record background vocalists on a few tunes. The spring equinox quarantine would prevent that from happening in person. Although I would miss the singers’ lush voices, their safety was more important than anything. I finished up the vocal overdubs myself and then set my sites on mixing. I had a good working rapport with engineer A Kid Named Cus while recording a few of the Leaving CLE tunes at Mercy Sound Studios on the Lower East Side. Cus, with his vast experience with hip hop, had an uncanny understanding of my record–that the music and poetry were never sonic background to each other.

Gigs evaporated, residencies were postponed. My teaching went remote. I had time…

I’d phone Cus to discuss the plan for mixing. Normally, we’d sit together at the mixing board–listening, mixing, discussing. We decided to discuss each song from my initial notes, and then email mixes back and forth. I’d listen, make comments and send Cus and email. He’d incorporate my notes into the mix, and then send a bounce. I’d listen and either improve the notes or send more notes. We’d communicate mostly by text and email. When the discussion became more esoteric, we’d speak by phone.

The mixing and mastering was finished in May. I waited to release the album. In June, I figured out a careful way to visit my mother, and assist her with some things at a time when information about the pandemic and travel safety concerning spending time with elders was daunting. Yes, I quarantined after arrival in my mother’s town.

The police murder of George Floyd and the vigilante murder of Ahmaud Arberry were very much a tipping point for activism in New York and around the country. Bed-Stuy was edgy with action. I attended protests and documented some of my experience in a short film.

I waited until January 2021 to release the album. With all the time on my hands, I wrote my own liner notes and talked myself out of releasing the album. It was time to send it to friends, and then let that baby go!

1.Edge-acation with its thump of existential questions about gentrification was first performed as a prose piece with chant at Write Night at Frank’s Lounge, a long thriving (now shuttered) soul-house outpost in Fort Greene, Brooklyn.

Narcissystem Bed-Stuy, a short film with music, was made early during quarantine.I taught myself some rudiments of editing in Adobe.

I multitracked myself reading “Nocturne and Prelude” by Russell Atkins. I was inspired by Atkins’ experiments with concrete poetry and their sonic possibilities for voice. (Excerpt)