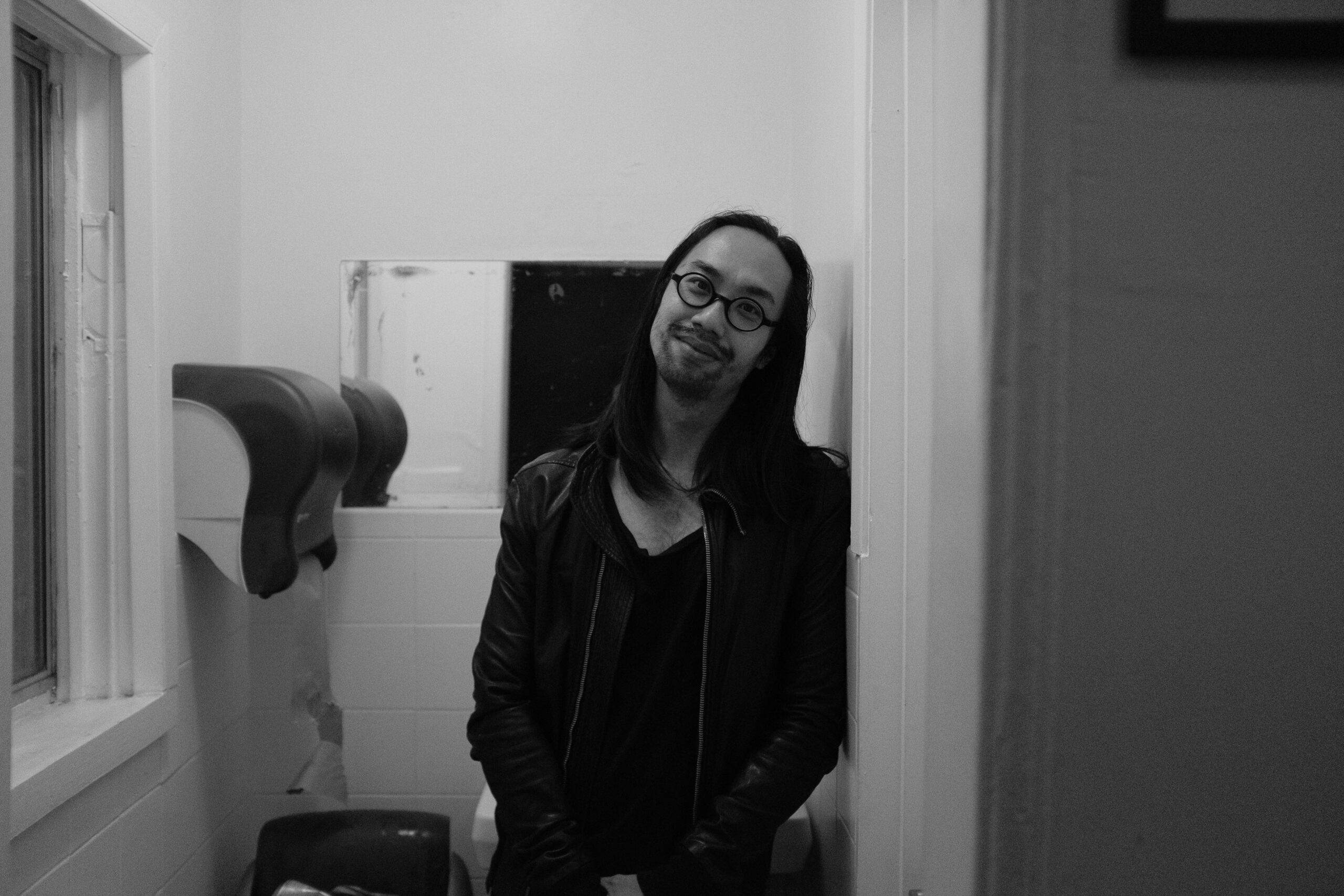 From saxophonist and composer Patrick Shiroishi:

When 2019 was ending, I was excited for the year to be reborn. Not only did I have my first vinyl coming out, but there were also plans to have a septet assembled to reimagine the music for the record release show as well as my first solo tour in Japan. Then, as we all know, covid came in swinging and the lockdown happened. It was such an unfamiliar, horror movie like story line that I ended up not touching my horn for two to three months after that and settling into a dark mindset…will there be shows again?…when would I be able to see my friends again?…what if my parents get it?

In that period of not touching my horn, I wrote and created (holy alone), a record filled with samples and field recordings that take me back to that time of uncertainty when I listen back to it.

The lockdown also gave me time to go back into past recordings that have been sitting and figure out homes for the music.  As the next couple of years rolled along, a trio with Daniel Wyche and Ted Byrnes came out on Astral Editions, trio with Corey Fogel and legend Joe Baiza came out on Personal Archives, sax trio with Gerrit Hatcher and Rob Magill came out on Kettle Hole, a modular synth duo with Eldar Tagi came out on Fort Evil Fruit, duo with guitarist Jessica Ackerley came out on Notice Recordings, duo with violinist Zachary Paul came out on Tapeworm, sax trumpet duo with Chris Williams came out on Astral Spirits, and Danketsu 10 released our third record on Warm Winters.  I also put out a couple of solo recordings, one exploring the suona called Hard Luggage on Falt and a collection of solo recordings over the past couple years called Resting in the Heart of Green Shade on Tripticks Tapes.

One positive experience that came from the lockdown was recording remotely with musicians all over the world via the internet.  It never occurred to me that making music with people across the globe was possible…for some reason I thought that we had to be in a room together.  I’m glad that was not true as I made some music I truly adore with new friends, a couple I have yet to meet in real life.  After getting coffee in October of 2020, Claire Rousay and I made our first duo tape that helped kick off her new label Mended Dreams and yes, it was a dream.  Noel Meek, who is located in New Zealand, reached out and we were able to complete our second duo record after getting used to sending files back and forth. I made a new friend in Camila Nebbia, who during the pandemic relocated from Buenos Aires to France, and through a couple of different methods put together our record. And finally, Fuubutsushi, a group consisting of myself, Matthew Sage, Chaz Prymek and Chris Jusell was formed.  Not only did we realize a four-album cycle based on the seasons and a composition for Longforms, writing with them helped me get back to my horn and out of the deep dark dread of those first few months.

A different kind of dread, however, returned several times throughout the year. Encouraged by a certain moron in the White House, discrimination towards Asian Americans kept rising. Tashi Dorji, Thom Nguyen, Dylan Fujioka and I created a quartet in response and with the help of Sige put the music out with all sales going to charity.  Dylan and I also recorded No-No and released it on the 79th anniversary of Executive Order 9066 which placed our grandparents into Tule Lake.  We were able to raise $500 which we donated to AAAJ.  The violence peaked in March 2021 when a shooting in Atlanta took the lives of 8 individuals, an event that shook me to my core.  Music is a huge way that I process things, and so in response “I shouldn’t have to worry when my parents go outside” was born. I was able to raise $1650 which was donated to AAAJ-Atlanta and the victims’ families.

Still weighing heavily on my mind, I came up with an idea to ask Asian American musicians in our scene to write any sort of reaction or thoughts on what was happening/past experiences, be it an essay or poem, and compile it to release in physical form.  I had no idea how I was going to make it happen, but thankfully Jordan at American Dreams was fully behind it.  The collection became a chapbook called Tangled, which was released simultaneously with Hidemi at the end of 2021 and included contributions from Susie Ibarra, Jon Irabagon, Kozue Matsumoto, Lesley Mok, Paul Lai, Tashi Dorji, Mai Sugimoto, Dustin Wong, Eyvind Kang, Amirtha Kidambi, Sharon Chohi Kim, Pauline Lay, Dylan Fujioka, Che Chen, Jason Kao Hwang and myself.

And that lands us in 2022.  While the year is still young, I do hope to somehow put together another volume of Tangled as I feel like there is still a lot more to say by a lot more people. As far as music, I do have a solo saxophone tape coming out in April through Soundholes and a solo guitar record through Garden Portal later in the year.  I’ll also be releasing two splits building off the more ambient tendencies I’ve been exploring with Jonathan Paul Hill & Jessica Ackerley, respectively.  In addition, two new duos will see the light next year; one being a soprano sax duo with Marta Tiesenga through Full Spectrum & a sax-bass duo with Kyle Motl through Notice Recordings.  My band Oort Smog with Mark Kimbell will also see our sophomore release through AKP Recordings.  A live recording with Dylan Fujioka and Angel Deradoorian will be coming out through Artist Pool.  SSWAN, a new group with Jessica, Chris Williams, Luke Stewart and Jason Nazary will release our first record through 577 with hopefully a second volume the following year.  A trio that I dreamt up with traditional Japanese instruments will also be seeing the light of day through Dinzu Artifacts with Kozue Matsumoto on koto and Shoshi Watanabe on shakuhachi.  Finally, a quartet recording with Jessica + heroes Daniel Carter and William Parker will be released through Ramble Records.   I’m excited for all this music to come out and, lord willing, get back to playing some live shows.