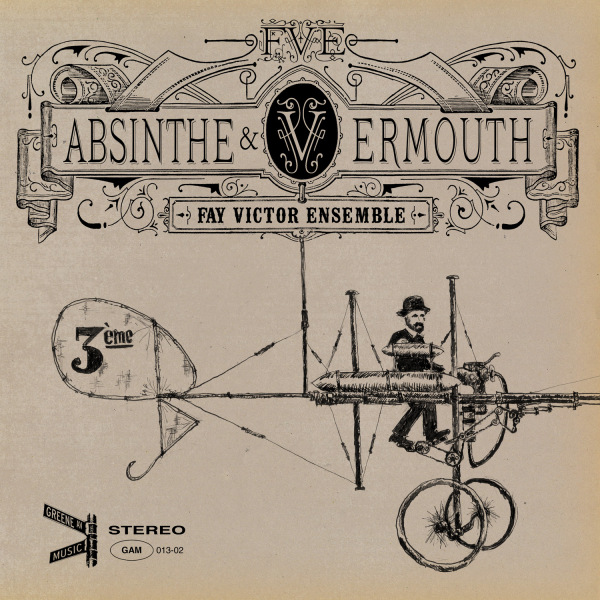 I have generally shied away from writing about “jazz vocals” simply because vocal works in such settings often force the accompanying instruments into a subordinate role. This is not the case with the Fay Victor Ensemble, a band that has  put out several groundbreaking albums in which Victor’s voice functions as one instrument within the trio–convening, contrasting, and electrifying the other instruments. The latest record, Absinthe & Vermouth, serves as a new landmark in avant vocal work, unveiling a stunning array of musical interactions, emotions, and images.

In many ways, the album plays like a suite, with each song feeding directly into its successor, often at a point of confluence, though in the transitions between tracks 2 & 3, 5 & 6, and 8 & 9, we instead experience needed doses of contrast. This album is a confident declaration of artistic vision, displaying the potent imaginings of the composers for the audience of listeners. The minimalism present throughout the record builds a cohesive aesthetic quality that builds with each song–the individual pieces each have something unique to say, but also add something to the whole. The broader musical vision is one of rare clarity and precision. Even at its most abstract moments, the sonic camera is in perfect focus.

The record opens with “Big Bag”, themed with lyrics of embarkation and journey. Right from the start, voice and guitar show a deep understanding, with rumbling bass beneath giving engine and movement to the entire structure of song. Each member of the trio has moments to interact, direct, and push the musical organism along on its path. Nilsson’s cutting guitar lines work well next to Victor’s equally dynamic vocal work. A guitar-bass duet then adds resonance before being prodded along by Victor’s often haunting, yet robust tone. Victor has the ability to fill the room with her voice without overwhelming the overall sound.

The second piece, one of two duets on the record, features Victor and Nilsson in a mellow vocals-guitar piece. The third track, “I’m on a Mission/Paper Cup,” is one of two extended pieces, providing a quick turn towards greater energy. Vocals and guitar cut in equal measure as they support and build off of each. The two musicians seem to draw from a similar aesthetic palette, producing some alchemical magic when applied to the sonic canvas. Filiano provides constant movement forward, eventually blossoming during a duet between bass and sparse guitar in the middle of the piece. The eventual return of vocals brings a warm and thoughtful mood with growing boldness. Victor shows that voice is, after all, the most fluid, emotional, indeed human instrument we have at our disposal.

“Gunk” appropriately opens with a long bass solo that really progresses as it moves. Then Filiano is joined by plucky guitar at 1:40 and a similar vocal quality at 2:04. The song exhibits some of the most impressive vocal leaps on the record, orchestrated with great precision. There is also a great use of tension between the three to build on the theme of renewal. “Robot Clown” has a fully abstract opening, then cohesion led by guitar, eventually shooting vocal lines out that carry the piece forward. Victor and Nilsson show some of their greatest understanding on the record–echoing and interacting on a deep level. As the song develops, Victor’s voice even takes on a slight white noise quality, pared perfectly with crackling guitar lines. Again, sparseness throughout exhibits the keen artistic aesthetic of communicating with rather than overwhelming the audience.

“Seashore” is a work of stark, classical beauty with a rich ambiance and the greatest confluence of musical voices on the record, a wonderful contrast to the preceding piece. “Talk Talk” opens with immediate energy and pulsating rhythm in this voice-bass duet. The penultimate track, “The Sign at the Door” pushes the album’s musical vision to its greatest heights. The same energy carries over from the preceding song, though it becomes a little more subdued via Filiano’s bowed bass. Victor and Filiano showcase their most poignant communication here. The bassist provides adept texture and narrative tension for Victor to drive along, accompanied by Nilsson. Victor’s vocal qualities of haunting, yet whimsical arcs achieve their most profound expression here. The closing piece is a sudden shift to dissonance, a reminder of the dual realities Victor has unveiled throughout, leaving us to wonder, which side of that dividing line are we on?

One of the best records of 2013, its late release (November) may have caused some to overlook it when compiling their “best of” lists. Fay Victor and her band continue to challenge us as listeners, to break through boundaries, and most importantly, retrieve something from their deep delving that is truly fascinating, unsettling, beautiful.