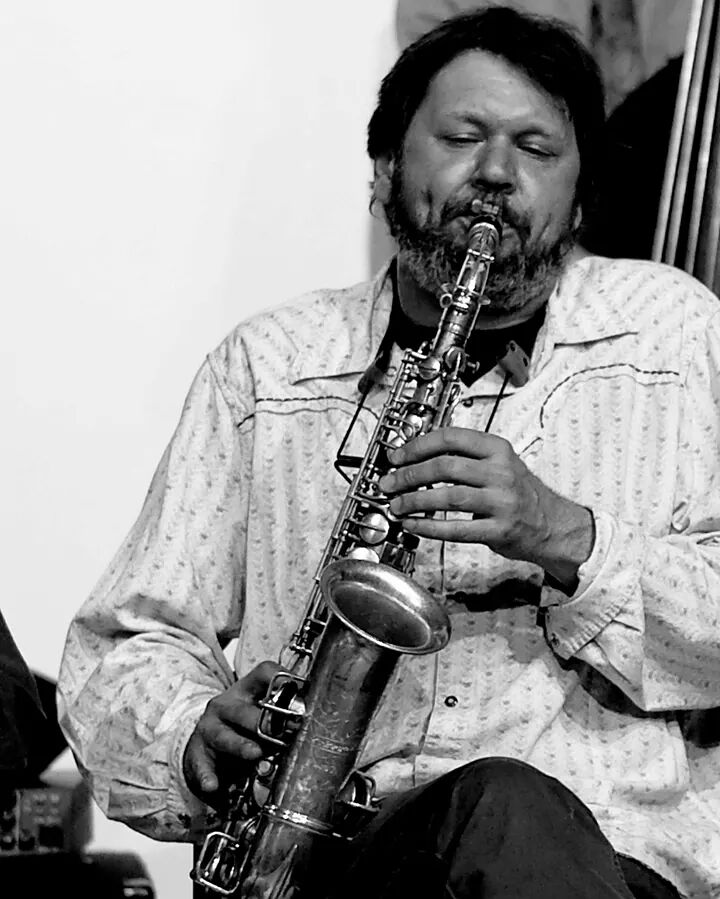 The exciting and fiery alto saxophonist Jim Hobbs is playing four nights at Douglass Street Music Collective starting Wednesday, August 20. Having developed a take-no-prisoners reputation with his playing and composing among numerous groups in Boston, this groundbreaking artist remains under-appreciated on the New York scene. Having led the Fully Celebrated for a number of years, Hobbs has orchestrated a number of exciting releases with that band and in other contexts. His four nights of performances this week are a great chance for New Yorkers and Brooklynites to get out and hear his latest music.

Cisco Bradley: What music will you be showcasing during your residency at DSMC?
Jim Hobbs: A mix of composed and improvised music that will explore the personnel of the different ensembles.
CB: What got you into the type of music you are playing today? Were there particular records, teachers, or contemporaries who played a role in that?
JH: As a youngster I was a metalhead … As a young alto player I was encouraged to check out “jazz.” I loved it all, but was most touched by the way the artists evolved over the course of their careers. That led me to a discovery of the evolution of “jazz” itself. Two records I came upon in the used record store were “Where’s Brooklyn?” and “Symphony for the Improviser”. Many people assume my Ornette roots but it is really Don Cherry that spoke to me. The discovery allowed me to embrace all my influences, Sabbath, Willie Nelson, Fela etc.
CB: How did you first become involved in the Boston avant music scene?
JH: When I first came to Boston I thought the scene would be more avant then I found it. I found a few guys who knew of the stuff I liked and turned others on to it …soon we had our own avant scene.
CB: Who have your principle collaborators been through the years?
JH: Timo Shanko, Django Carranza, Taylor Bo Hynie, Joe Morris, Laurence Cook, Bill Lowe, Forbes Graham, Luther Gray, Mary Halvorson, and others.
CB: Could you talk a bit more about the people you have selected to play with you at DSMC? What kinds of musical relationships have you formed with each of them over the years?
JH: Well, a lot to say. Haven’t played with Ava yet, with Nate only once briefly and Chad only in a two-drum situation. So night one is a fulfillment of my desire to play with them more. I have toyed with a “with strings” idea for a while and recently had a chance to do that with this line up in Hartford for a Joe Morris and Stephan Haynes day of improvising mash up … I have played the most with those in the 7 piece band. Feel a brotherhood with Taylor, Ken, and Tomas as we have traveled together. Josh played my music when he lived in Boston as has Brandon. And Brandon and I have toured a little. Ingrid and I sat next to one another during the Braxton opera rehearsals and performances and I loved listening to her warm up. Tatsuya is an old friend and one of the most creative percussionists I have ever heard.
CB: You have collaborated considerably with Taylor Ho Bynum. Could you talk a bit about him as a musician and a person?
JH: Taylor and I met when he moved back to Boston after college. I asked him to join the Fully Celebrated and we kept a weekly residency going for 3+ years at 3 different venues. We all really found ourselves during that time, Taylor switched to cornet to better blend with my 20’s Conn and his sound was born. I think of him as my little brother and feel great pride watching him grow as an artist, composer and a leader. He is a great man and I am very happy to call him a close and dear friend.

CB: Have you formed any new groups recently that you would like to talk about?

JH: Always forming new groups/ concepts. DSMC is a taste of exactly that.

CB: Do you have any upcoming releases to highlight?