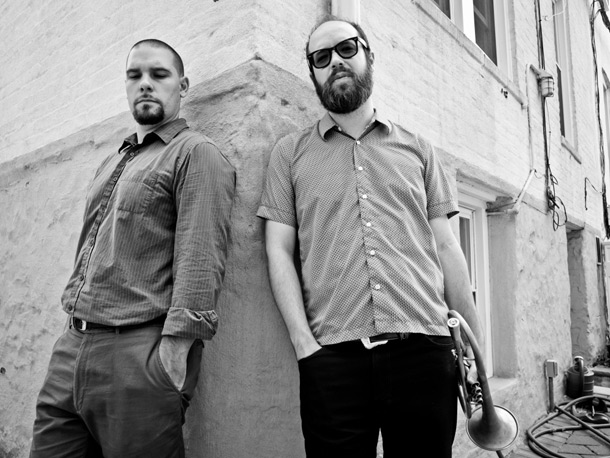 Kirk Knuffke (cornet) and Mike Pride (drums) played a set of duets in a rare outing at Cornelia Street Cafe Sunday night. I found this project intriguing from the first time I heard their album–Exterminating Angel (Nottwo, 2012)–originally because I would not have thought to pair the two eclectic musicians together. They each bring a very different set of musical aesthetics to the forum. Knuffke plays in a range of contexts, displaying the ability to swing even in avant and improvised settings, always with a healthy edge to his playing. Pride is one of the most adept improvising drummers of his generation, an intrepid sound explorer who has no limit in what he might consider or attempt in the course of music creation. The drummer has played in bands that range from avant improvised punk metal and across the creative jazz spectrum. The fluidity and musicality of Knuffke and the inventiveness and unpredictability of Pride produce an exploratory set of duets that are not only dynamic in their points of connection, but create a third voice, that is, the space between the two where the constantly fluctuating interrelationships are what matter most.

Knuffke-Pride do not set strict rules before playing. Rather, one or the other (or sometimes both) begin playing, establish a mood, and then allow leadership to flow back and forth naturally in a way that can only occur after a great deal of practice. The pair played two extended pieces, followed by a short piece, finishing just past the hour mark. In the opening piece, Pride often seemed to produce the raw ideas that Knuffke then molded and shaped with his own techniques and approaches. Pride’s off-kilter rhythms in the opening tune created and maintained narrative tension, leading the audience boisterously forward, Knuffke sometimes amplifying that feeling, while at other times, softening its impact.

The second piece reversed the feeling of the music, with Pride sometimes playing more regimented rhythms against which Knuffke experimented with the elasticity of the moment, again exploring sound in multiple directions. Some of the best moments came towards the end of the second piece, with Pride using bowed cymbal to produce industrial, yet airy and stretched sounds that afforded a contemplative mood that merged into gong strikes that resonated well with Knuffke’s warm cornet. The openness of the sound instilled measures of a spiritual, meditative quality, before disintegrating into riveting snare and chain disruptions that cut decisively across the musical landscape. The closing tune shifted towards a swinging farewell that closed with wonderfully integrated snare brushes and falling cornet lines.

Cornelia Street Cafe is a place where people come to really listen. The food is quite good, especially for a jazz club, and the service is exemplary, but when the action starts, all else ceases as the audience pays close attention to what transpires on stage. The music was well-served by the space, allowing their individual voices and intricate playing to hang in the air unmitigated by interference.

Knuffke-Pride is a band that has built its success on the contrasting approaches of the two players. We can hope that a second record is in the works, perhaps one that will capture them in the magic of the live performance.