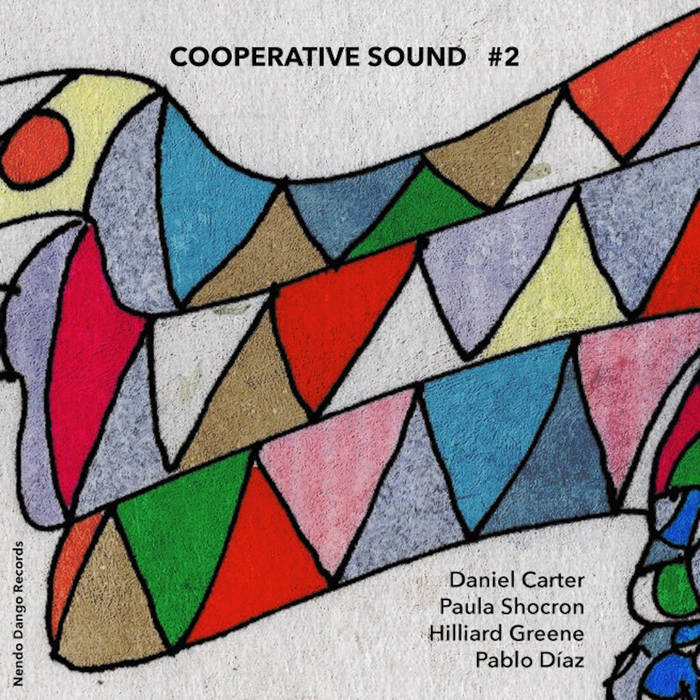 Cooperative Sounds #2 is a much stronger recording as it open with Hilliard Greene on bass for the first track. This kind of musical experience is becoming rare with each passing day. Young musicians aren’t getting the opportunity to work with exceptional older musicians. Greene is joined by Paula Shocron on piano and Pablo Díaz – drums. “Taking Off,” starts off slowly but Greene does a nice job setting the template. He plays briefly with his characteristic bass style, using his strong melodic sense, creating an attractive musical landscape. Greene is joined by Shocron shortly, on piano. She expresses herself well, intensifying the gentle fray that’s starting, almost like water warming up, but not to a boiling point! Díaz also jumps into the mix. The group plays with fire for a few short minutes before Díaz launches into a drum solo of his own. The trio comes together after his short solo moving into an alternate dimension of free jazz! They’re playing free but I get the feeling this could also be a traditional post-bop era ensemble. Their improvisations feel very “inside.”

Shocron really steps up her playing on this track using chords as a means of increasing the group’s intensity. Her chords gradually reduce in speed and tempo, as the band concludes this short, but interesting musical journey.

Track two, “Wind Travel,” opens with Daniel Carter’s laid back flute work while both Shocron and Díaz generate minor tension in the background. Díaz’s use of mallets creates a nice effect while Shocron is laying down chords and playing them in an upward ascending direction like a scale. Her piano work tends to drift often into classical music and tends to dominate Carter’s mystical brooding lines. Díaz is staying somewhere in between percussive sounds and odd rhythmic attacks. Before you know it Carter, the renowned multi-instrumentalist, has changed to his trumpet. He often plays a number of instruments, such as: flute, trumpet, saxophones (alto, tenor, and soprano), and clarinet. Carter’s true genius is his ability to make musical comments and understate them simultaneously. What’s surprising is Hilliard Greene’s absence on this track. I believe this would have made this performance fuller. Díaz continues with his pitter-patter percussive sounds on the drums, while Daniel hits high notes on his horn. Shocron, joins him as Carter continues in this artistic vein. This cycle repeats itself until the group reaches the end of the piece.

Track three, Pequeños diálogos reiterados, allows Shocron to set up the template for this slow-moving ballad. She uses arpeggio-like patterns to outline the chords for this composition. Hilliard plays with a full sound using the bow, outlining an eerie melodic riff. Díaz is in the background making his presence felt via blitz attacks. He does them softly so as not to disturb the dynamics between Shocron and Greene.  I like her use of arpeggio-like patterns, as the basis for this moving composition. Her improvisations remain on the outline of the chords of this song.

Track four, “Landing,” provides space for Díaz to utilize an almost timpani-effect on his drums. Not since I saw Roy Brooks, during the early seventies have I seen or heard someone do something along these lines. In this case, Díaz is muffling the sounds of the drums while striking them at the same time. The group is a trio again here with Shocron, Díaz, and Greene. The improvisation is more open, allowing the audience to hear what statement each musician is making. When Shocron enters, she applies an unusual melody on the piano. It’s somewhat bluesy, but not exclusively remaining in the blues. It’s a mutated form of the blues with other elements thrown in. The more I listen, it’s not easy to decipher the code she has set in motion. Clearly, she’s very oriented towards working with a form, as she shapes the clay of her music thoughts. She has generous support from both Greene and Díaz. The music seamlessly merges into a very free form style of playing and ends very unexpectedly!

This album is a cooperative work between all the musicinas involved,
Nendo Dango Records and Continuum Culture & Arts, Inc., a non-profit
501 (c)(3) organization.