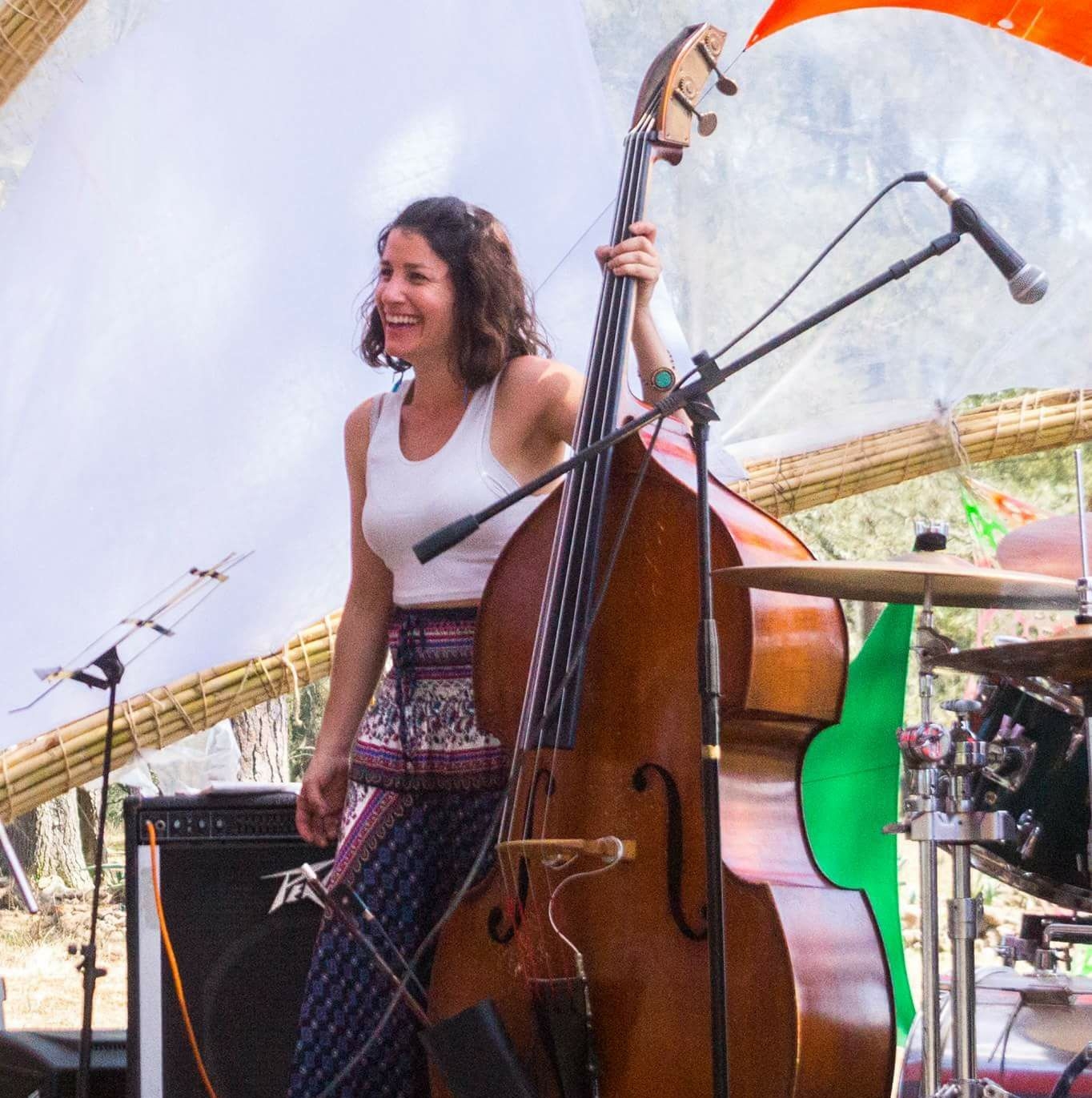 This is the first in a series of interviews that I will publish with musicians that I met during a brief visit to Mexico City around the time of the 2018 New Year holiday. First up: bassist Adriana Camacho Torres.

Cisco Bradley: Where do you come from? What were your formative musical experiences growing up?

Adriana Camacho Torres: I was born and raised in Mexico City. As a kid I began playing piano and organ at my aunts house, to my amusement they were there all to myself, no one played with them them except me,  when she passed away I received the piano as inheritance. I guess that marked me in some way, I passed sacred long hours improvising and inventing music, in a magic musical bubble.  I was raised by my mom but she had no special interest in music, so I self taught myself to read notes. Then I grew up with this insatiable sensation that I had to study music but that did not happen till I was older. Life led me to study communication and film, I became a documentary filmmaker.  I shot two independent documentaries of my own. Set (http://youtu.be/una8xnK6vHw) 32 Mostra Internacional de Cinema Sao Paulo official selection, Best international documentary Here of England Film Festival; and Agua de Tabasco (2008) (http://youtu.be/36HMwxCxEjM) which won the Jose Rovirosa Award 2010. Then again life´s odd turns and economic independence allowed me to me finally study music formally. 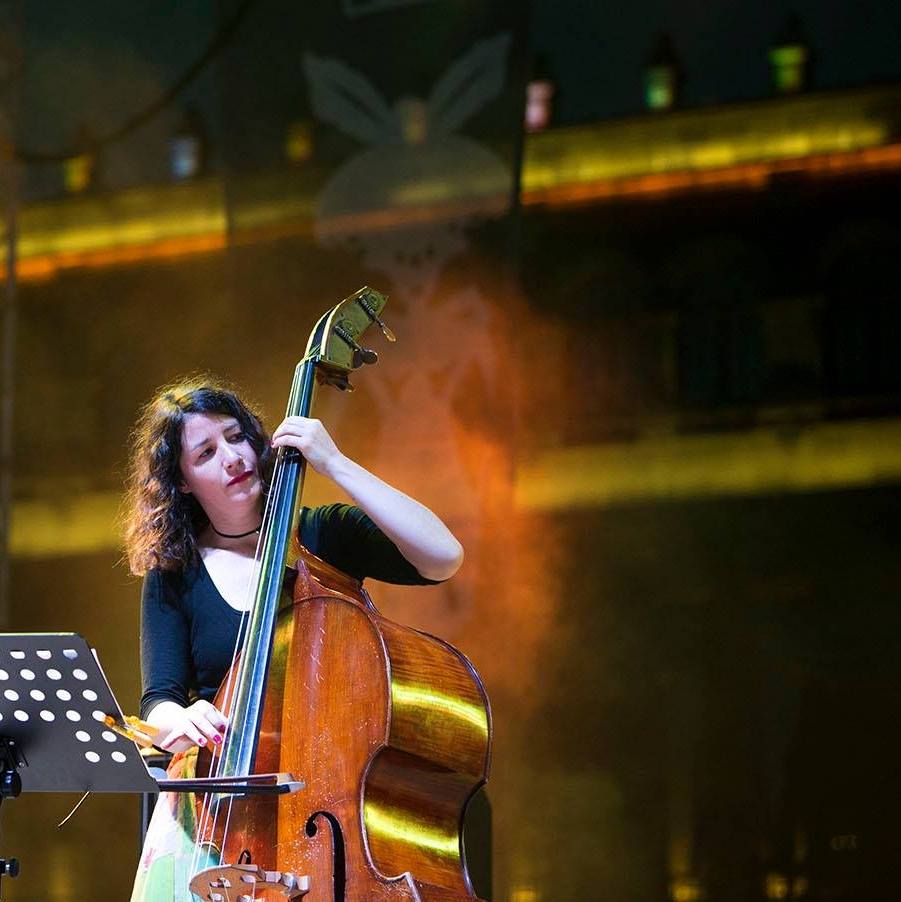 CB: What kind of training did you do?

ACT: I began playing the electric bass at a music school, there they had upright basses so I tried one with a bow, that first sensation of low vibes running through my whole body made me want to study that giant. Then a love story with me and an amazing instrument called in Spanish “contrabajo” began.  (“con trabajo”  in English literarily translates “with work” . It´s funny with work you play it and carry it…). My first teacher was Enrique Valadez a cool veteran of jazz and blues, which is the kind of music I learned to play first.  I used to hangout with some very cool musicians that were in both the traditional jazz scene and mostly the improvised scene. Rogelio Nobara, composer and marvelous musician, multi-instrumentalist  guided my initiation onto the improvisation path.  We spent days on end recording and improvising, just letting go: bass, voice, sound, objects. These years taught me that music is a powerful tool of auto knowledge, universe knowledge, the awareness of being one with the whole, a healing force, a way to find some meaning  in the universe.  Through the beautiful path of learning the instrument I found kind and generous teachers like Itzam Cano (free jazz bass player ), Eddie Gomez, yes the one and only Eddie Gomez, he said to me “you´ve got the music in you, but you need some technique” so I strove and still am working on classical technique with David Sánchez .  That is learning to play the instrument, where to you find a C or G on a fretless giant, this is fascinating, but there is another world where you expand your technique by interacting with other musicians, improvisation gives you a vast sea of techniques you only achieve by free playing.  So my most valuable teachers have been the fellow musicians I’ve played with, learning the art of improvisation on the run, playing  non-stop, learning about silence, self-doubt, respect for others, no hierarchy, and infinite forms.

CB: Who/what do you consider to be your major influences?

ACT: Charles Mingus, Charlie Haden, Paul Chambers,  Joelle Leandre, Peter Kowald, Marc Dresser, Malachi Favors, Henry Grimes the list is long of great musicians, those who play tradition and others more experimental, players that expand the instrument. The music of Ornette Coleman, John Coltrane, Charlie Mingus, Albert Ayler and many more is what I love.  I have a fascination for free jazz, powerful music that fits with my rebel nonconformist heart, longing for change and social justice in Mexico it is quite suitable where violation of human rights, femicide, macho culture is the norm, this free music empowers me!! Film is another love of mine so I like to make sound landscapes like in films. 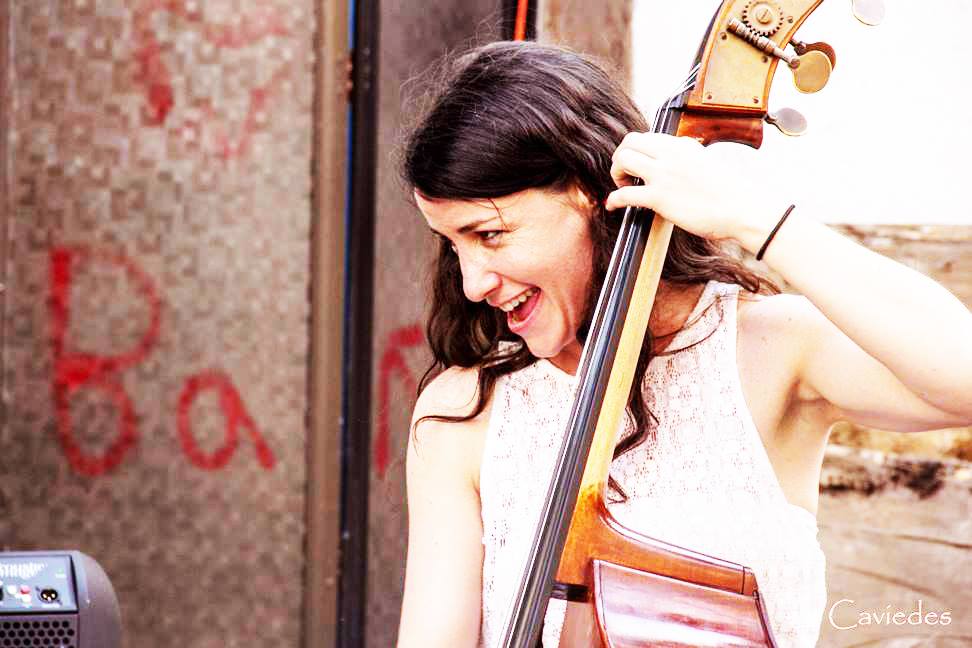 CB: How did you get involved in the Mexico City scene in particular?

ACT: Jazzorca,  is the place where it all started for me. Back in 2007  with Rogelio Nobara we had a band called Irradiador, the music and  concept of the band was inspired on a 1920 ´s artistic movement called Estridentismo  and Jazzorca was the place we played our first gig. In This ultra counter culture dark, under the bridge hidden in the street of “Municipio Libre” (free municipality) has been around for about 23 years  hosting free jazz, experimental, whatever free music you can think of.  At Jazzorca I’ve listened to the sounds of the universe with bands like Zero Point (Germán Bringas, Gabriel Lauber, Itzam Cano) and a plethora  of other incredible musicians and bands. Free Musicians from all over the world land at Jazzorca.  There I’ve met many musicians with whom I collaborate and organize festivals, gigs, and find other spaces for our music.

CB: What are your main musical projects?

Ciwatl has a nice story to tell. It began when German Bringas organized a gig in which Ana Ruiz (piano), Chefa Alonso (soprano sax and drums), and I play bass, the concert was so cool we made a record Free Jazz Women and Some Men. Then Ana and I formed a band called CIHUATL which means “women” in Nawatl language. Chefa lives in Spain, so maybe some day we´ll get together again. But Ana and me keep playing, she is amazing, great teacher. Her improvisation school is Don Cherry, Herny West, Cecil Taylor. I love playing with her.

A free jazz trio. Ernesto Martínez Andriano sax, Hector Toro drums, me on bass This band I love so much.

My solo project is still a baby, it’s me on the bass with loops, voice and loops,  ocarinas, tank drum.. loops and loops. I´m working on a future show.

I am very proud that me as a women am active playing with my bass here and there, it gives me a possibility to tell stories and interact with many wonderful musicians.