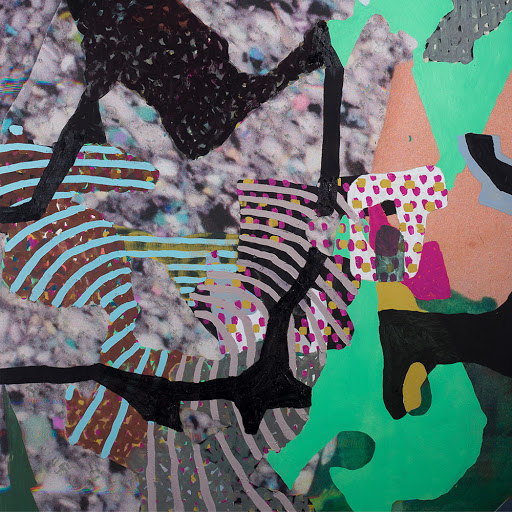 With members rooted in Chicago and New York’s underground music scenes, Je’Raf is a wildly diverse and idiosyncratic ensemble fusing Hip Hop, Punk and improvisational sounds. With Brianna Tong on vocals, PT Bell on vocals and bass, Wills McKenna and David Fletcher on tenor saxophone and trombone respectively, the band is rounded out by Ishmael Ali on guitar, Eli Namay on bass and Bill Harris on drums. Je’Raf’s latest album Throw Neck is a quirky project full of deft playing and intriguing musical ideas.

The album opens with “Black Holes As Waste Management ” The tune opens with bass locking in with Harris’ drums. Once Ali joins in on guitar, the piece begins to bring to mind the kind of spare, ragged, atmospheric funk of Instrument-era Fugazi. Tong enters with a dramatic vocal and lyrics about jet-setting through space in search of black holes because. “we need a place to put our shit!” Coupled with comical gang-vocals from the band, Je’Raf comes right out the gate, throwing down a bizarre, exciting and intriguing musical gauntlet. “Fifth Cycle” sets its tone on the back of some tricky and forceful drum and bass interplay, while Tong’s wordless vocal and Fletcher’s trombone dance together in counterpoint. Ali’s guitar vamps proceed subtly while McKenna steps into the arena, taking flight into a fierce, propulsive solo. Structurally and spiritually, “Oy” is the closest to straight-ahead Hip Hop than any tune on the album. Bell’s oddball, rapid-fire vocal calls to mind the jazz-inspired experiments of Freestyle Fellowship’s Inner City Griots. (“This One’s) For The Ether “is a strange and gorgeous tune that highlights the band’s ability to play music with a soft and understated character. Tong’s lead vocal is bright, and crisp, delivering serene lyrics that probe at the nature of consciousness “Just a thought…just a thought that quickly passes on by…leaving a trail, echoing the sound of sleep, traces of twilight…”

With its dynamic mixture of improvisation, hip hop, funk, and punk, Throw Neck blends a variety of influences into a unique whole. Whether it’s coming from the musician’s powerful solos, bugged-out lyrics or intricately timed, abstract grooves, Je’ Raf is making music that sounds like nothing else.