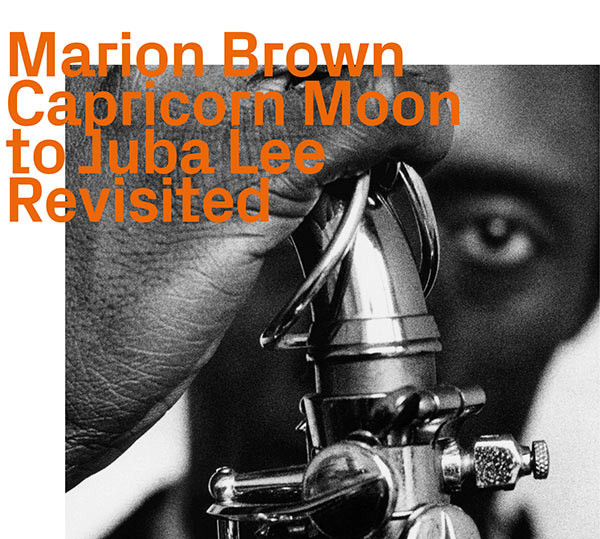 The late 1960s was a white hot crucible of creativity in jazz. And much of the best was caught by Bernard Stollman’s ESP label. In addition to fairly well known work by Sun Ra and Albert Ayler the label was a treasure trove of the “second generation” of free jazz. And none was more deserving and less lauded than Marion Brown. Fortunately Hat Hut’s new Ezz-thetic series is aiming to bring some of these great seminal sessions back in pristine recorded sound.

Marion Brown was originally from Atlanta but found himself in New York at this creative time. His alto was first heard by most people on Coltrane’s Ascension and on Archie Shepp’s Three for Trane. His own music had elements of both masters but also merged a cool intellectual style and a deep love of African American folk idioms. His folk side is particularly revealed on the two albums that make up Capricorn Moon to Juba Lee. The first recording features two side length improvisations for a group that features Wayne Shorter’s brother Alan on trumpet, Rashid Ali on drums, and Reggie Johnson on bass. Ronnie Boykins from the Sun Ra band also guests on the cut Capricorn Moon. Shorter is particularly a revelation on this album, contributing the B side tune and soloing in an entirely personal manner on the trumpet. Brown also manages to sit on the line between lyricism and skronk on both these tunes, giving a particularly good extended solo on Capricorn Moon that beautifully balances both sides of his personality.

The second recording, Juba Lee features the basic quartet with a larger group augmented by trombonist Grachan Moncur, Bennie Maupin on tenor, and Dave Burrell on piano. Brown and Shorter again contribute one tune each but this time each tune is given a more sophisticated arrangement. Juba Lee has moments that sound like the late Ayler groups at the Village Vanguard, full of sounds from early New Orleans brass bands and primitive baptist singing. Monchur contributes a fine solo that ranges from the main key to all sorts of subsidiary keys and emotions. Shorter’s Iditus is based on whole tone harmony insistently reiterated by Burrell on piano. The whole tune has an ominous air which explodes into outright menace as the solos progress. Shorter in particular does a marvelous gradual build in his solo.

The second album in the series is Why Not Porto Novo Revisted. Why Not is also a quartet album without Shorter. Sirone substitutes for Reggie Johnson and the late, marvelous Stanley Cowell finishes out the rhythm section. This is the closest these albums get to a traditional blowing session. Cowell’s presence brings in a bigger tie to traditional bop and post bop. La Sorella is a shimmering tune that brings to mind Trane’s “After the Rain.” Cowell begins a lush modal solo that takes Brown into the stratosphere. Though the tune has elements of Trane the music is unmistakably Brown’s own. “Fortunato” is an almost traditional ballad with a film noir quality and really beautiful chords. Brown delivers the melody with restraint and Cowell delivers a lyrical freeform solo that still sounds as if he’s playing inside changes. Why Not is a straight up free blowing session with intense solos by all players and killer propulsion by Ali. Homecoming has a beautiful backwoods church feel to it and moves almost immediately into a raucous stride-inspired solo by Cowell. Piano drops out and Brown takes a freewheeling jaunt that comes as close as he ever does to the wildness of Albert Ayler. On the whole a superb piece of work all around.

The final recording , Porto Novo, is a European trio outing featuring a trio with Maarten Van Regteren Altena on bass and Han Bennink on drums. It is lovely and refreshing to hear Brown stretch out in this format. The group sounds similar in a lot of ways to the Ornette Coleman Trio of the mid-1960s. Regteren Altena bows much like Izenzon did and the tunes have that deceptively simple sound you find in Ornette tunes. But Brown is a different player, more measured and perhaps a little farther from Bird than OC was. Bennink is the weak link here for me. I’ve often found that he plays way too much and too loud, almost like the Buddy Rich of free jazz. But I don’t think that is all on him here. The original recording has a very pronounced reverb on it that is quite distracting even in the solo horn and bass passages and muddies up the drums irrevocably. Though I think Hat Hut has done a Herculean job with the notoriously weird sound of some of the other ESP disks, this one might have just been impossible to clean. Its a shame cause the saxophone solos are some of the best Brown solos of all time.

So over all, this is a fantastic effort that does very well by a criminally underrated musician from the avant garde. I highly recommend both disks in this series.