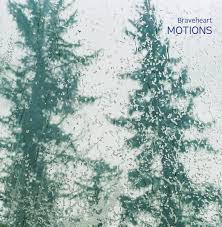 Braveheart, a saxophone trio based in Vancouver, Canada, is comprised of two of the city’s natives, Amlani and Meger, as well as Montreal-born Crosby. The band came together during an impromptu all-night recording while the three attended McGill in 2009 and the three musicians have attended summer residencies at the prestigious Banff Centre in Alberta. Motions is their second release, following 2011’s Acoustic Music. Meger readily lists an eclectic array of influences including “Tim Berne, Fly, Tony Malaby, William Parker, Lester Young, and the Dutch free improv scene.”

Motions comprises five concise songs totaling just over twenty-eight minutes of music. One of the songs was composed by Meger, while the other four were freely improvised. The overall mood of the album gives it cohesion, even as each piece is its own exploration of that sound. The title track opens with tenor over light cymbal and sets the tone from the outset that this is not to be fierce, driving music, rather it possesses a thoughtful, buoyant verticality that moves patiently along. The players take there time with each idea that they come upon in their collaborations. The playful tenor contrasts well with the deep resonating percussion for a dark sound. The energy of the opening piece is carried forward into “How Do You Feel?,” a piece that offers a wide variety of emotions in response to its question. Wonderfully quick, flickering cymbal work elevates the piece, while badass bass thunders an undercurrent beneath.

The album takes a contemplative turn with “Divided – United” with mellow tenor out front, occasional drum rattle or cymbal strike, and very selective bass playing. Bass and tenor interact counter-intuitively here in a wonderfully challenging way, moving at different tempos and producing different moods that become more striking in contrast. “Thick Stars” further investigates the relationship of the two instruments in buzzing resonance over flashes of percussive energy. The final piece showcases interactions between tenor and drums, with the bass undercurrent again tinting the overall sound a bit darker. Only at the conclusion did I find myself wanting something more–a return to the more energized opening pieces, if even briefly, to give the album a more balanced feel.

Vancouver continues to be a place producing interesting, boundary-breaking musicians. Catch this band as they tour through Canada again this coming summer.