From tubaist and composer Ben Stapp:

It’s been awhile since I’ve done a self release or promoted my label, Uqbar Music, but I was asked to run an article about what’s been going on with me during the pandemic, I thought this would be the perfect opportunity to do a relaunch with two new significant releases: Eono Jux and MCSD, Ch. 2: Imaginary Kraken.

The Story OF Eono Jux, Absurdism, and Theta Scales

This album is the first product after a long bout of writer’s block. Four years ago, I created a harmonic system that in its inception, was supposed to supply me with an endless amount of new material. After years of failed attempts, entire albums written and thrown-away, my once perfect musical homunculus looked back at me mockingly. I called it Theta Scales. The mathematics and symmetry of it were perfect, but something was off. Everything I tried to do with it seemed like the old me, but tired and sad, so what was missing?

When the pandemic hit, everything became amplified. The block was real. And now, without sideman gigs to distract and inspire, it was front and center. To reference Men in Black, I needed to find my own apple pie – change my focus. I read more sci-fi. Disappearing into the infinite worlds out there was a needed relief. I got into Dungeon Mastering and added a couple hundred points to my sad online chess account.

I made a couple avant-pop tracks, and also tried my hand at some absurdist comedy on youtube. The videos below were a direct response to going completely virtual at the public school where I teach. The idea of teaching band virtually was overwhelming for me so this was my outlet. In short, they are erroneous music lessons videos that get progressively stranger. Watch at your own risk.

In these explorations I found what my little Theta scale monster was missing, a world to live in and grow. My hypothesis: If there was a fictional world where Theta scales lived, I’d feel that innocence, wonder, and creativity once again – I’d find the ward to my creative ennui.

Enter planet Eono. I finished writing out what would be more like a novella-sized, companion’s guide to the eventual novel. It had all the ideas but was quite dry in its presentation. Suffice it to say, the novel is underway and I am having a lot of fun with it. We’ll see when I finish.

However, in the process of this world-building, I did find my music muse and it came in the form of rhythm. It was an absurd surprise to me that it took a whole planet to build to realize how much I needed a complementary rhythmic system. Theta rhythms were born shortly after.

With a personalized harmonic and rhythmic theory flushed out, I was ready to put them to the test. I decided to apply these stylistic rules to different styles to see. If the rules were clear, (as they are with older styles) then I should be able to hear a Theta version of any style. Theta Harmony in Four Styles is a collection of different styles (Baroque, Classical, select composers from the 1900’s) looking through Theta filtered glasses. The last one, Autobiographic, is a Theta version of written music I used in Myrrha’s Red Book.

In these pieces I wanted melody and ornamentation to seamlessly connect and overlap. In the business and confusion of it, the listener can see moments of thematic clarity going in and out of focus. Visually I think of this as a textured collage, similar to some of the surreal works of Julia Lillard (right image: Untitled). There is something here recognizable and conventional but also something very off. 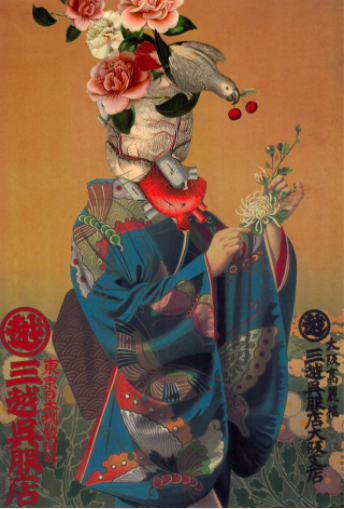 I was now set with my tools and ready to explore planet Eono. This brings us to August of 2021. School was about to start and my wife was six-months pregnant. If I didn’t do something then, I knew things would get much busier and harder to execute, musically speaking.

I wrote the music for Eono Jux for Satoshi Takeishi, Shoko Nagai, and Rob Brown specifically. We rehearsed the written music and then went over the improvisational concepts based on the Theta harmonic and rhythmic ideas. The biggest challenge here was to marry the freedom I needed from such formidable improvisers, with stylistic demands. Specific to this group, we spent a considerable amount of time rehearsing modalities of improvisation and interaction. Here, it was not just written music and complete freedom. The freedom now had a context, and, as the album attest, the performers did their thing with beautiful abandon.

One thing to notice in the album is that it welcomes a specific kind of gestalt listening experience. If you listen to one instrument alone, you will hear its own specific musical zone and development, independent of the others (a bounded freedom that we practiced). If you draw your focus to the sound of the group as a whole, you will hear a controlled and stylistic chaos. The last four tracks are free improvisations to showcase these wonderful musicians. The titles comes from episodes in the first four chapters of the unfinished novel: Ourobius, Eono, Uzmic Ro’Samg.

That’s the story of Eono Jux. It’s been quite a journey getting here and I’m excited to share the release with Jazz Right Now on my label Uqbar Music.

The label’s name, Uqbar Music, comes from a short story by Jorge Borges about a world that manifests into existence through the protagonist’s curiosity and investigations. The more he searches, the more his world becomes the world of his imagination. Eono Jux is one small piece of the world I hope to uncover.

The Mind Creature Sound Dasein (MCSD) projects come from my fascination with monsters and the mental constellations that arise when confronted by them. The terror or aw of something monstrous or unknowable can immediately send someone running or it can be a source of inspiration – helping us to observe and examine our own reactionary mental processes.

After finishing the first MCSD, I was looking for new inspiration for the next one, specifically new and compelling creatures. By luck, I came across James Wright‘s novel, The Kraken Imaginary, and was immediately impressed by his descriptions of the beast and the story he created around it. There was one scene in particular that I based this composition on, whereupon the protagonist finds the creature in an underground grotto and witnesses the Architeuthis and one of its devotees engage in a ceremonial union of sorts. The author describes the ambience of the scene in such detail, alluding to sonic textures and song, that after reading it, the project was inevitably underway.

Both MCSD and MCSD, Ch.2: Imaginary Kraken are based on extended techniques. For me this represents the unknowable. The composition is really a map where certain players act as conductors cuing players and sections, sometimes asynchronously with others. The piece was written with Sam, Stephen, Olivia, Sarah, and Tyler in mind as many sections were built around specific extended techniques that they’ve developed over the years and are characteristically their own.

Different from other projects, Imaginary Kraken, and the original MCSD (Fundacja Słuchaj Records) are really built around shaping and directing the extended technique sound world as a thematic focus.

I was also excited to collaborate with my sister, Jessica Stapp, on these album covers. I’ve always admired her work and I knew this relaunch for the label would look a lot more stylish with her contribution. Although these are digital releases for now, we are considering some form of a physical copy for fans, possibly in the future.