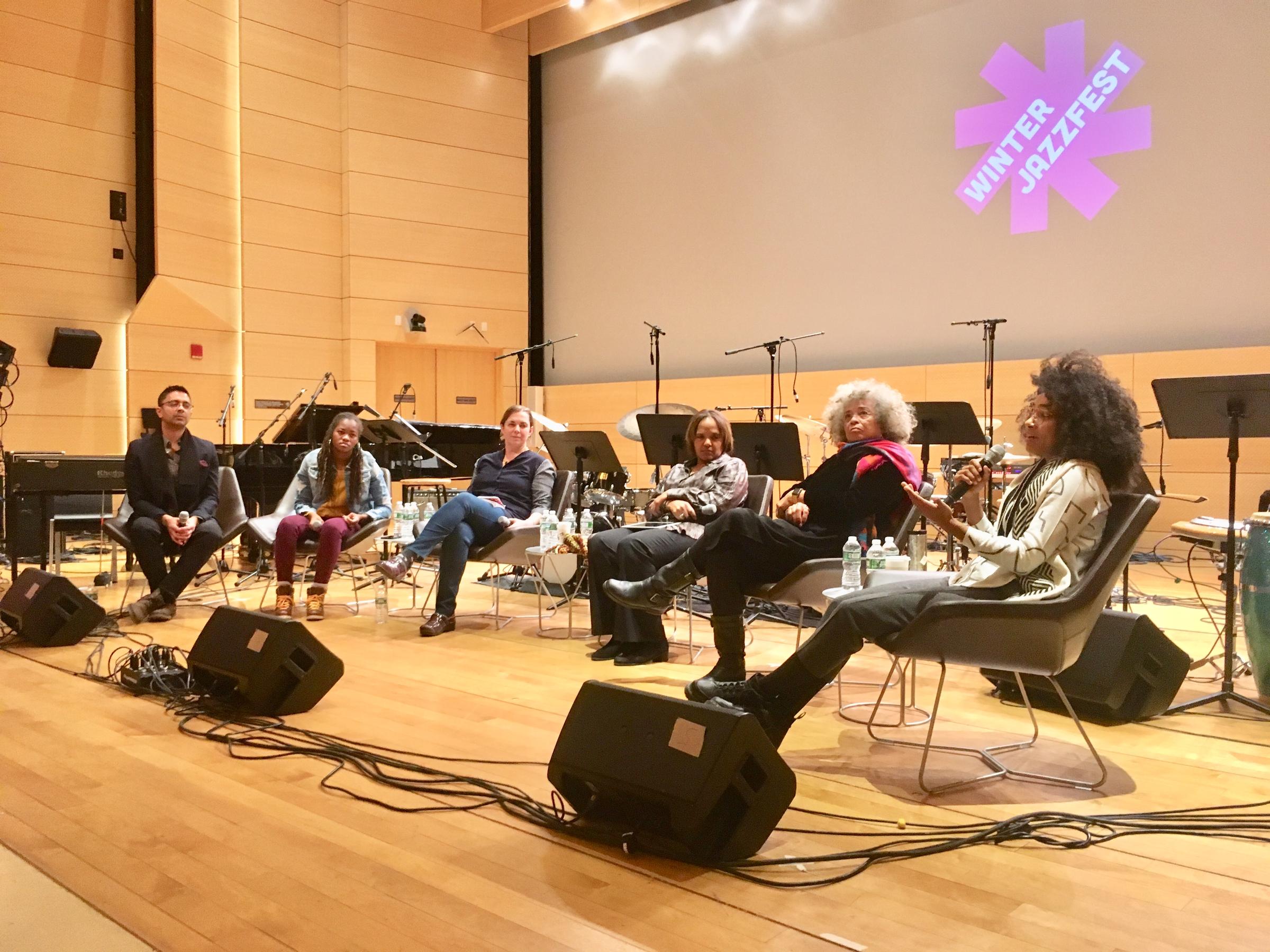 There is something about jazz that embodies the vanguard of a revolution that has yet to come. “The music itself is about manifesting the unknown,” said Esperanza Spading at a panel on Gender and Jazz held at the New School as a part of Winter Jazz Fest held in New York City. Master drummer and jazz educator Teri Lyne Carrington moderated the panel which posed an all-too timely question: Given its legacy of calling out injustice and forming the basis for the imagining of new worlds, why is it that the jazz community is struggling so much with respect to inclusivity, representation and sexual harassment? Panelists who addressed the question included young trumpeter Arnetta Johnson, jazz journalist Lara Pellegrinelli, Angela Davis, and pianist Vijay Iyer, as well as Esperanza Spalding.

Jazz has long been a musical terrain where liberation was explored in ways that would only crystallize into recognizable movements decades later. Winding back to its earliest origins when enslaved people used “talking drums” as a means for coded communication despite the threat of brutal consequences, jazz has embodied the spirit of resistance to limiting and oppressive realites. Take for example what Angela Davis called the “feminist impulse” present in the music of Ma Rainey, Bessie Smith, and Billie Holiday who used their art to address issues like domestic violence and women’s labor at a time when there was no precedent and certainly no public forum for the discussion of black women’s experience. It would take almost 50 years for the subjects given airtime by Ma Rainey to make their way into the national discussion as the modern feminist movement took shape. Or take for example the Association for the Advancement of Creative Musicians (AACM) founded in Chicago in 1965 as a collective space for musicians of color to support one another in exploring musical modes outside of and with explicit disdain for the commercial mainstream. The AACM’s space served as fertile ground for an avant garde whose iconoclastic influence nevertheless made its way into all corners of modern mainstream music. Consider Max Roach and Abbey Lincoln’s transcendent We Insist! Freedom Now Suite released in 1960 at the crescendo of the civil rights movement epitomizing in an album the form of “jazz as protest.” Or take the devotional music of Alice Coltrane which, despite its being long overshadowed by her husband’s work, is being rediscovered and continues to abet our yearning for access to a shared consciousness. Not to mention the compendium of living artists, Matana Roberts, Matthew Shipp, Kamasi Washington, Nicole Mitchell to name a small few, whose musics are gateways from the past to the future. To catalog the ways in which jazz and jazz musicians have served as a catalyst, a mouthpiece, and imaginative space for envisioning of a more just world would take thousands of pages. The key is that it as an jazz, as a form, has that capacity. 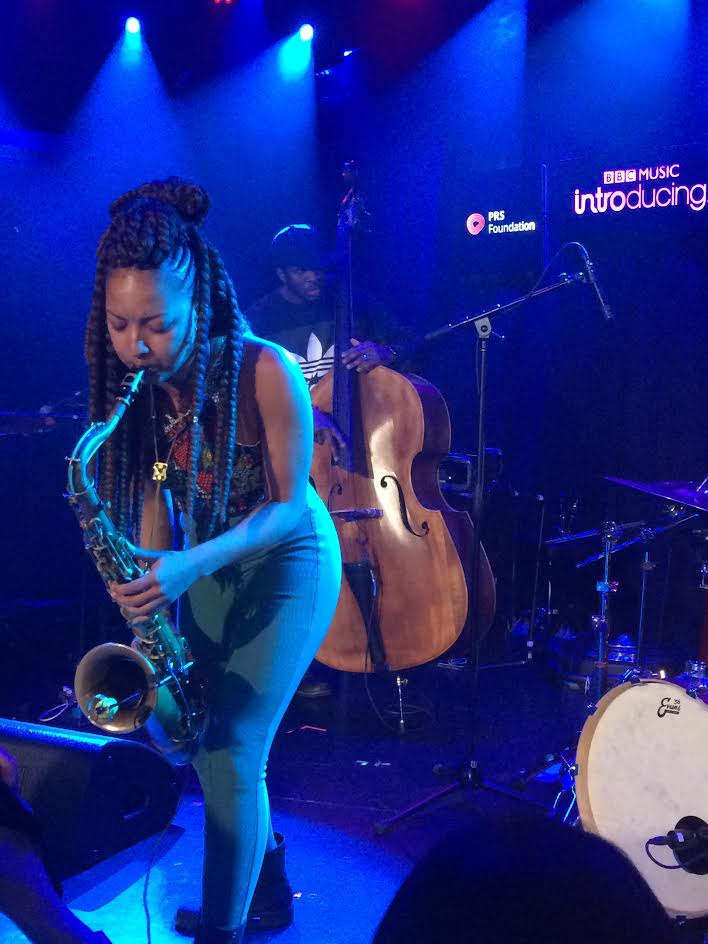 Despite its capacity to prefigure new worlds, though, jazz is a medium rooted in the practices of the now. Now is a time fraught with injustice in its many structural and interpersonal manifestations. Which explains why, in some ways jazz is still, as Carrington said, so “ass backward” and so plagued by gender bias. How backward is it, really? Backward enough for there to be only 5 women among the 137 critics consulted in the 2017 NPR jazz critics poll. Backward enough for trumpeter Arnetta Johnson not to have female instrumentalists as peers with whom to practice and share experiences at Berklee College of Music. Backward enough for there to be no women at the industry table when an artist like Esperanza Spading goes to sign a recording contract. Backward enough for a unit on “Women in Jazz” to be an afterthought in the marginalia of a Jazz History course syllabus and for “Queer People in Jazz” to be absent from the syllabus altogether. Backward enough for a student at the celebrated Banff International Jazz Workshop to admit to Iyer, who directs the program, that she had never trusted a (male) instructor to put their hand on her stomach to teach her how to breathe until she had the opportunity to work with saxophonist Tia Fuller. Afterwards Iyer noticed this student’s tone and projection vastly improve. Iyer told the crowd that every year admitted participants call him regretfully reporting that they can’t attend due to financial strain or responsibility to family, and overwhelmingly these participants are people of color, overwhelmingly women.

Jazz thrives in the realm of the improvisational, the abstract, the realm of what could be. But the most powerful abstractions are accessed by way of a firm grasp of the concrete. These concrete examples given by artists and educators on the panel show the kind of deep reckoning that needs to take place within the community at all levels, from how interpersonal relationships manifest in the 3 piece combo, to how the admissions process works at the most prestigious institutions. The reckoning is not a luxury to be taken on eventually, it is an urgent piece of business that jazz, with modern artists still being outpaced in record sales by those long dead, cannot afford to put on a back burner. The current political moment is asking us all to imagine and transcend while ameliorating the immediate circumstance with committed action. How can jazz expect to survive these staggering hypocrisies and remain relevant without heeding this call?

Music and the community it inspires is essential for creating the kind of sociopolitical bonds that will bring us out of this debased political era. It is both a language through which we can speak to one another across difference and a social matrix through which we can perceive new ways of sharing space with one another. Angela Davis asks us to consider Grenada, the small island in the Caribbean where in the late 1970’s the New Jewel movement was underway cutting through the smog of subjugation through a radical commitment to popular democracy. Davis remembers from a meeting she attended during her visit to the Island in 1982 that there were “about 30 minutes of speaking and 3 hours of music”.

We have seen that music is a non-negotiable part of healing and building community. But even in making that music some of us are free-er than others. Spalding recalled being able to feel the difference when she was playing with Carrington and the late Geri Allen, as opposed to her male peers. “I accessed aspects of my musicianship that were unavailable to me when I had to be on the defensive. It takes a lot of energy to maintain that front. Without it, the energy went to my playing,” said Spalding. We should consider what else is being made unavailable to those of us who are constantly and often unwittingly bracing against our environments. As a community of practitioners and artists we must commit to making that treasure trove accessible. The reality is that we cannot get free together, even through a revolutionary medium if the very use of that medium requires bracing against that which might harm us.

In times of perishing reasons for hope, the jazz community, in reverence to the idiom itself, must focus on the task at hand which is to address and overcome issues rooted in antiquated preconceptions of gender and sexuality. To do this we must take an honest look at our work and commit, each of us, to doing better.

The We Have Voice Collective has compiled an open letter to the jazz community regarding issues of sexual violence. You are invited to read and sign the letter here:

convert
Cisco BradleyOp-Ed: A Feminist Urge Is Driving the Shape of Jazz to Come02.06.2018