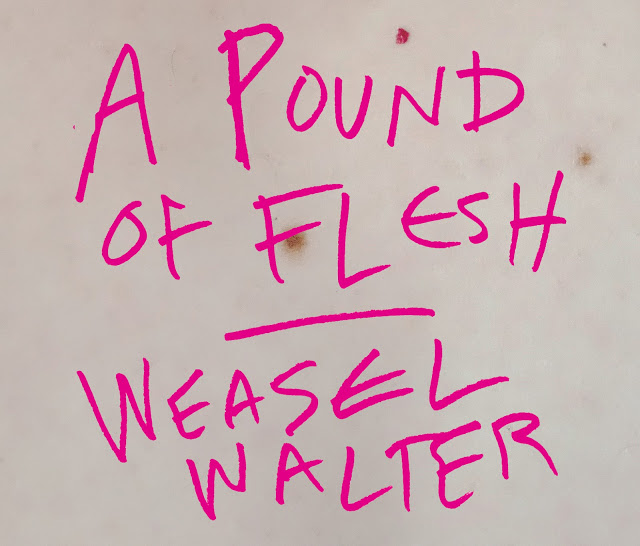 Drummer, saxophonist, electric guitarist & electric bassist, Weasel Walter’s latest recording, A Pound of Flesh, is a four CD set consisting of nearly five hours of music. This isn’t your average cup of tea. The music is challenging and you will need to focus on the emerging sounds from each track. Weasel Walter plays drums and electric guitar on nearly every track of this album. He uses guitar sound effects plus electronics throughout this boxed set. In his own words, Weasel Walter describes this four CD set as follows:

“A Pound of Flesh is a tour de force solo offering by musical polymath Weasel Walter. Known for his wide-ranging work with ensembles like The Flying Luttenbachers, Cellular Chaos, XBXRX, Behold The Arctopus, and Lydia Lunch Retrovirus, as well as his prolific career as an improviser, producer and composer, Walter reveals almost 5 hours of long, abstract forms in this monolithic set. Ranging from detailed electro-acoustic  music to athletic solo drumming, skronkily deconstructed power trio improvisations to minimalistic horrorscapes, harsh noise walls to solo guitar deconstruction, A Pound of Flesh, is a manifesto of internal coherence and brutal aesthetics. This box contains 4 CDs as well as a full color 12-page booklet discussing the compositions. The number/signed edition is limited to 100 copies only.”

While this is quite a mouthful, as I listen to the first CD, it can only be described as an acoustic electrical mind-blowing LSD trip! I’m hearing elements of electronic music with eerie science fiction tonalities, with ambient alien landscapes that venture into the known and the unknown simultaneously. This isn’t your everyday kind of listening music. This is a collection for a discerning audience, one that has a broad musical base. This has to be Weasel Walter’s most ambitious project to date.

Weasel Walter: “Manticore, is an electroacoustic work entirely comprised of source material from Curses, Half-Death, and Tribute to ‘B’ and ‘C’ List….” Is concerned with the possibilities of the grand pause.”

ME: He discusses the specifics of these pieces in greater details. Get this CD set, if you want to learn more.

Weasel Walter: “The Inevitable, originally released by Tomb Visions in late 2016 as a limited edition cassette, is a single-minded investigation of high-energy free playing featuring an extended exchange between members of an Imaginary Trio.”

ME: It does sound like an explosive trio at that. This performance is highly energized, my kind of music.

Disc two presents more high energy solo drumming from Weasel Walter. The format he’s using, is one I’m familiar with. He can go anywhere he wants depending upon the desired end he has in mind. The title of this piece, recorded in three parts, is “Xenoglossy.” I can only describe the sounds on this disc as highly eclectic! This isn’t what most drummers do when they engage in a solo drum format. This is truly avant-garde, not your usual anything presented by Weasel Walter.

Weasel Walter: “Like Curses, Half-Death, Manticore, and Xenoglossy, are more spacious than most of the rest of my oeuvre, which has been typically baroque and hyperactive to the point of overkill.”

ME: I will say “Xenoglossy” is unlike any solo drumming I’ve heard up to this point. It is very experimental with the live electronics and Weasel’s unique way of playing the drum kit. No one, but no one, plays drums like him. These drum beats are very unorthodox. This isn’t what most drummers do when they engage in a solo drum album. His drumming approach almost touches base on Milford Graves or even tabla drumming from India. He touches on his home turf of rock, punk, & metal drumming, however, this is done only in shades throughout this portion of the recording. Weasel’s drumming is on the aggressive side, much like the fury of an angry hornet’s nest. When wasps attack, they only have one agenda in mind – to sting everyone in sight!

Weasel Walter features himself on electric guitar and electronics. He manages to squeeze every ounce of sound from these devices. Fans that have followed him from The Flying Lutenbachers days will love this. The first piece is actually from a previous recording, “Half-Death,” recorded back in December 2014. This was done shortly after I left Cellular Chaos. His explorations on this track have lots of electronic ambience, and I don’t mean the pretty sounding chords that you’re likely to hear in New Age music. This material is meant to cut through your gut like a serrated knife with lots of jagged edges, only the knife blade stays in there, while you bleed out. I can’t say for sure if this is Weasel’s intention, but the music strikes me as having a very dark motive; one that’s meant to inflict maximum punishment on the listeners.  This music will push you out of your comfort zone. This is forty minutes of agonizing tortuous music, designed to be as uncomfortable as much as possible for you, the listening audience. Listen to this music if you dare!

Weasel Walter: “Half-Death” is essentially an aural suicide note. It is a wasteland of morbid, funeral pulsations disrupted by savage, irrational guitar bursts in a cocktail of pure tension that can only exist in such a desolate mental corridor. The foundation of the piece is a single long percussion sequence that repeats unchanged for the entire duration.”

The pieces that follow are designed to get under your skin and work your parent’s last nerve. These seven songs have an irritating quality about them that will upset everyone in your family. Track 6, “My Music Is Way Less Irritating Than Your Personality,” is of interest as is taps into African drumming along with the electronics and other sound effects happening simultaneously. The last piece, “Channeling the Agony of Musical History,” opens with percussive sounds followed immediately by electric guitar musings. The rest of the song is pretty chaotic moving into densities with layers upon layers of dissonant atonalities. Electrical sounds abound everywhere, with thunderous bass drum flutters (bass drum rolls).

“End of An Error” is the first track on the last disc. Weasel does an engaging drum solo to start things off. I’m hearing drums and temple blocks, always a winning combination for any percussionist. There’s quite a bit of stop and go pauses, with more bass drum flutters. This is a very fine display of percussive skills in motion. I’m sure the current crop of drummers and drummers of the future, will draw inspiration from this performance.

Track two, “Momentum (for Andrew Ortmann),” opens with audio illusions. The sounds project through the right ear, than the left ear on my headphones. They eventually come together through both headphones at the same time. This is another LSD trip in the making for those who like that sort of thing. The music on hand is live electronics. Weasel is adept at producing these sounds as he is at playing the drums. I must admit, I did not see this change coming. It is a smart move, working with the sounds of electronic music, as opposed to staying strictly on the drums and other percussion instruments. During this interlude, I can’t tell if this is electronics or if Weasel is playing the guitar. Some of it sounds like electronics while the rest strikes my ears as him working out on an electric guitar. I will let the listeners decide when they check out this recording.

Weasel Walter: “The piece ‘Momentum (For Andrew Ortmann)’ was commissioned by its namesake. Andy asked me for some solo guitar noise to use as raw material for something he was recording. Naturally, I obliged, but “Momentum” is my definitive personal edition, featuring a small bit of editing plus a simple, static pitch shift/delay scheme that resulted in interesting, unintended counterpoints and harmonics.”

Scorched Earth, lives up to its title. The music assaulting your ears will certainly make you think of death and destruction. Do go out and order this CD set online. Weasel Walter fans must add A Pound of Flesh to their collection of Ug Explode recordings. This project is going on my list of best CD recordings for 2017!