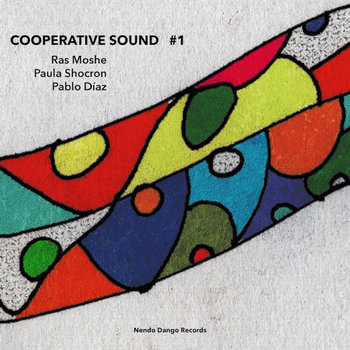 Nendo Dango Records is a fairly new record label that records free jazz. In the words of the musicians behind it, they describe the music and the record label’s mission:

“Nendo Dango arises to gather not only our music, but also to show a way to reach it, a way of construction in favor of the collective. We believe that sound is like a nendo dango capsule, within all possibilities; every breath of each artist is crossed and transmuted, being one towards oneness, revealing unique and infinite sound-eco-system.” — Miguel Crozzoli, Paula Shocron and Pablo Díaz

This bandcamp release has six tracks of music, opening with “Friendship.” Gongs and cymbals introduce this piece as Ras Moshe steps into his improvisations. The sounds emanating from his horn almost seem like an alto saxophone. Paula provides generous support on the piano as she backs Moshe. Paula Shocron’s playing is almost what one hears at a piano recital, a very classical orientation touching on any one of the great classical composers. Moshe’s playing has matured over the years, having chosen a less tumultuous musical path, not the high energy free jazz that stylized this music when it was introduced during the sixties.

So gentle is “Friendship,” it led into “Walking Downtown.” Moshe changes to a linear angular approach while Shocron darts in and out with block chords, interspersed with short rapid fire melodic riffs. Pablo Diaz lays into free jazz drumming, generating a muscular sense of direction. When you have a piano in the group, it tends to fill the space. What I’m hearing is a tonal center that locks Moshe and Diaz in orbit around Shocron’s piano playing. Moshe is taking his time before he soars into the upper register of his tenor. From here, things get much more chaotic in every sense of the word. When he stops playing there’s a momentary shift in the band. Shocron and Diaz wisely choose to let the piece end.

Track three, “Lefferts Gardens,” referencing Prospect Lefferts Garden in the Flatbush area of Brooklyn. The piece showcases Shocron solo work at length, not rushing her ideas. They come across clearly with great clarity. She plays inside, and merges into adventurous free jazz, with a dash of classical thrown in. Near the end of her solo, she plays a riff that’s quickly picked up by Moshe. He mimics this line and moves the trio forward with this unorthodox theme, the scale-like melody continuing to be the lifeblood of the piece while also being rhythmic in nature. Shocron continues to work with this theme, like a scale, changing the key and tonality as the music progresses, eventually bringing it to a logical conclusion.

Track four, “Chelsea Evening,” is a song that begins with a series of almost circular breathing sounds from Moshe. He unleashes more unearthly tonalities which are typical of free jazz, eventually joined by Diaz and Shocron. Together they create a maelstrom that pushes the music entirely into the upper atmosphere! Given the name of this song, I find this evening quite turbulent in nature. It makes me wonder what’s going on? After what seems like several minutes of horn screaming, “Chelsea Evening,” ends all too soon.

Track five, “Cross Seasons,” begins with an airy setting. The sounds are closer to new age, drone, or ambient music, though no electronics are being used. Moshe takes up the flute, allowing it to spread its magic throughout the room. Both Shocron and Diaz are exercising good judgment changing to much softer dynamics. This is the trend for this piece. I can hear Paula striking the piano strings creating an almost John Cage effect. This track is engaging in its own way. As Moshe expands what he’s playing, both Shocron and Diaz alter their playing to help shape the undefined mass of clay emanating from Moshe’s flute improvisations. Clay has to be shaped into a recognizable form. What this does is push the trio into another musical direction. I’m impressed with Shocron and Diaz’s support during this musical interlude!

Track six, “Music Always,” starts as a drum solo for Pablo Diaz. He’s uses a fair amount of colors between the snare, bass, and toms. Moshe enters and immediately shifts the energy of the group. The duo that ensues takes on a life of its own, generating its own momentum. Moshe sounds really good here as he did on his flute during the preceding track. Shocron joins the two although the duo format could have gone on indefinitely. Her entry somewhat changes Moshe’s tonal center. While the piece is free, it’s being played at a lower volume level that I’m used to hearing at live shows. The trio is working very melodically within this context. Moshe stops and Shocron takes charge with her playing an unusual rhythm that Moshe quickly absorbs. He takes it and jumps into a series of scales accompanied with increasing dissonance.

Ras Moshe has finally come into his own. He has been leaning in this direction for some time now. His approach honors the past and the present generation of musicians.