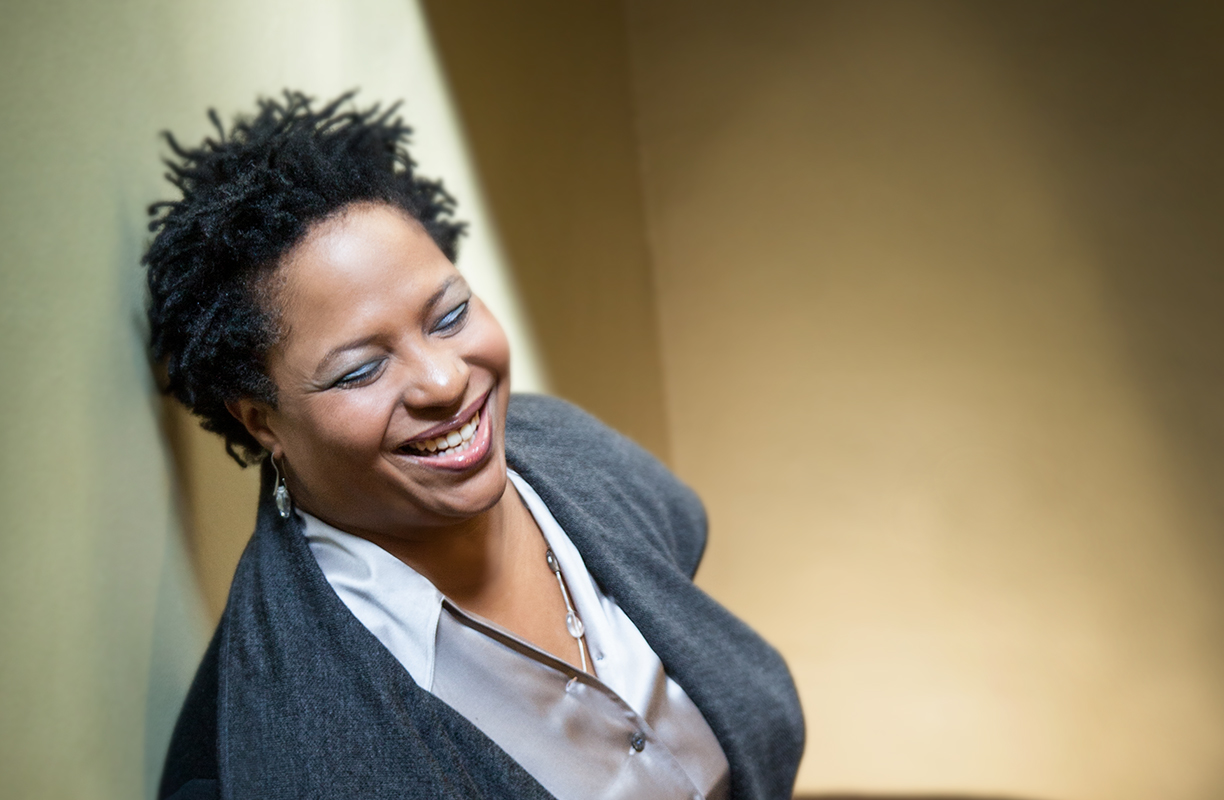 Vocalist Fay Victor has been at the center of a number of interesting and innovative musical groups since returning to New York City in 2003. Her longstanding Fay Victor Ensemble has released a series of acclaimed albums, most recently Absinthe & Vermouth (2013). Her previous release, Freesong Suite (2009), remains one of the most forward-looking vocal albums of the past decade, combining her rich vocal work with abstract ideas grounded within a rare aesthetic palette.

Victor is also quite effective in the duo setting. Her longest-standing association is with guitarist Anders Nilsson. Victor is also constantly breaking ground with new musicians, such as her duo with guitarist Brandon Seabrook which is performing for the first time this month.

In May, I had the opportunity to sit down with Fay Victor to talk about one of her other projects, Neighborhood Dynamics, performed at Roulette, April 12, 2014, with Nicole Mitchell, Vincent Chancey, Anders Nilsson, and Ken Filiano. The piece took a poignant look at the gentrification of Brooklyn and its impact not only on the livelihoods and demographics of the borough, but also on the sounds of the community–the voices and sounds of the street.

CISCO BRADLEY: I love that you are doing this project, Neighborhood Dynamics, it connects to what is going on in Brooklyn on so many levels.

FAY VICTOR: Thanks for coming by the way to check it out.

CB: Yeah I loved it. The set you played at Roulette was phenomenal. It was a set of music that really made me stop and think.

CB: I would like to hear more about how it came together.

FV: Well you know, sort of happenstance in a way, when I moved back from Europe we wanted to live in Clinton Hill again, but we just couldn’t afford it so we moved to Bed-Stuy and it was just at the beginning of gentrification. We moved in October of 2003 and it was pretty much the African-American community I knew it to be, and then we just saw this gradual change that took place over time. Then came this opportunity. Taylor [Ho Bynum] asked me to apply for a spot in the Presenting Series. There was a call for proposals and they chose mine. I had already been thinking about identity and certain changes to the neighborhood. I also noticed real changes like how the language differed on the street and how Sunday mornings changed. I’m not religious myself, I don’t go to church at all, but in a lot of African American communities one of the things on Sunday is people get really dressed up for church and it’s a really, really beautiful thing to see. There were other changes—the way people greeted each other on the street, the way peoples’ voices changed, that kind of thing.

CB: Can you give some more specific examples?

FV: There is a sort of societal perception that African-Americans are very loud, right? I don’t think so and what I discovered in gentrification is actually that white people can be VERY loud. I’m talking purely street sounds and impressions. I think African-Americans do rise up if we are sort of animated about something but in the normal speech of walking around we are not loud at all. One of the pieces in the suite is based on this idea. The language is, each syllable is sort of clearly enunciated at the same sort of decibel level, so you have this monotone, I mean, I should actually record it, it’s really fascinating. And so you know, I’m living on the same block doing the same thing as I was always doing but all of a sudden the sounds around me began to change. And I talked to my husband—he’s a white guy but he is also Dutch so he also has an outside perspective of everything and we would talk about these changes. We have this nice habit we get up in the morning, maybe talk for 3 hours about politics or whatever there is to talk about, observations we have made. Like the last few years there are certain things that we talk about a lot, then all the amenities, all the restaurants and new places opening, and how the demographics changed in those places. The sometimes overwhelming cop presence, the police presence, you know, that there’d be a lot of beat cop on corners, you had that for a while. I even stopped some of those cops to ask them why they are here now. Like just to have conversations and sometimes I’d have open conversations, they would say, “You know, there have been some robberies and we are concerned.” But I would say, “weren’t the robberies also here before 15 years ago, why weren’t you here then?” So, a lot of this was on our minds and had been for a long time. It seemed like a good idea to do a project on it, and then of course how do you do it? And we decided, once we agreed this is what we would do, and I decided at the time to label the piece ‘dynamics’ because to me that’s a dynamic its not simply a black white thing, its not, it’s a gradual change, and then dynamics is you know, how does it feel and also how it feels for me personally. That piece, Guilty, where I talk and we literally play with dynamic markings is actually about me, its really me personally, it’s not just some idea of a character portraying these words, it’s real. I wanted a place in the piece to make a  personal statement.

FV: You know, and so then the idea was let’s do it as a chronological event from the time we first started noticing these changes up to the present time. And then we also incorporated statistics. I downloaded a lot of information, just hard cold numbers about how gentrification was changing Brooklyn and also other parts of of the country, because it’s a nationwide trend, it’s not just Brooklyn.

FV: It’s not just Brooklyn, and actually there were some charts in the piece that we improvised on and those were based on actual statistics.

FV: Well the statistics of how the demographics have changed. When I was in Clinton Hill in the 80’s well obviously, this neighborhood was somewhat mixed, I would say, 70-75% African-American, 25% everyone else, but a lot of Brooklyn communities you just didn’t see a lot of whites, unless you went way, way out. If you went to Coney Island or Sheepshead Bay or Brighton Beach and such places. And those places weren’t really welcoming to African Americans either so, you saw neighborhoods in this part of Brooklyn getting much more white, so the demographics shifted. I think over a 10 year period the African-American population has dropped by 4% but the way everybody talks about it you would think it would be much, much more. But the white community has increased by 12%.

CB: In what time?

CB: In which neighborhood or in all of Brooklyn?

FV: Yeah, in Brooklyn.  And the Asian population has increased a lot actually something like 8%. So we used these numbers and we generated graphs using those numbers and then we use those as tools for improvisation in the piece. Actually in the program we had one of those charts. The original idea of the piece was to have the whole piece based on the graph, that was the original idea but we changed it because I thought that made it a little too cold, you know, I wanted to have real song structure you know like a rock song part and we started with the blues. We wanted to have those sort of, and if you do it purely you know like from call numbers, I mean you can play with either but, so we, in the end we decided to use the numbers in very specific places in the piece. So that was our interpretation of things, but it’s also attached to a real concrete movement of people or things or places and how people are living.