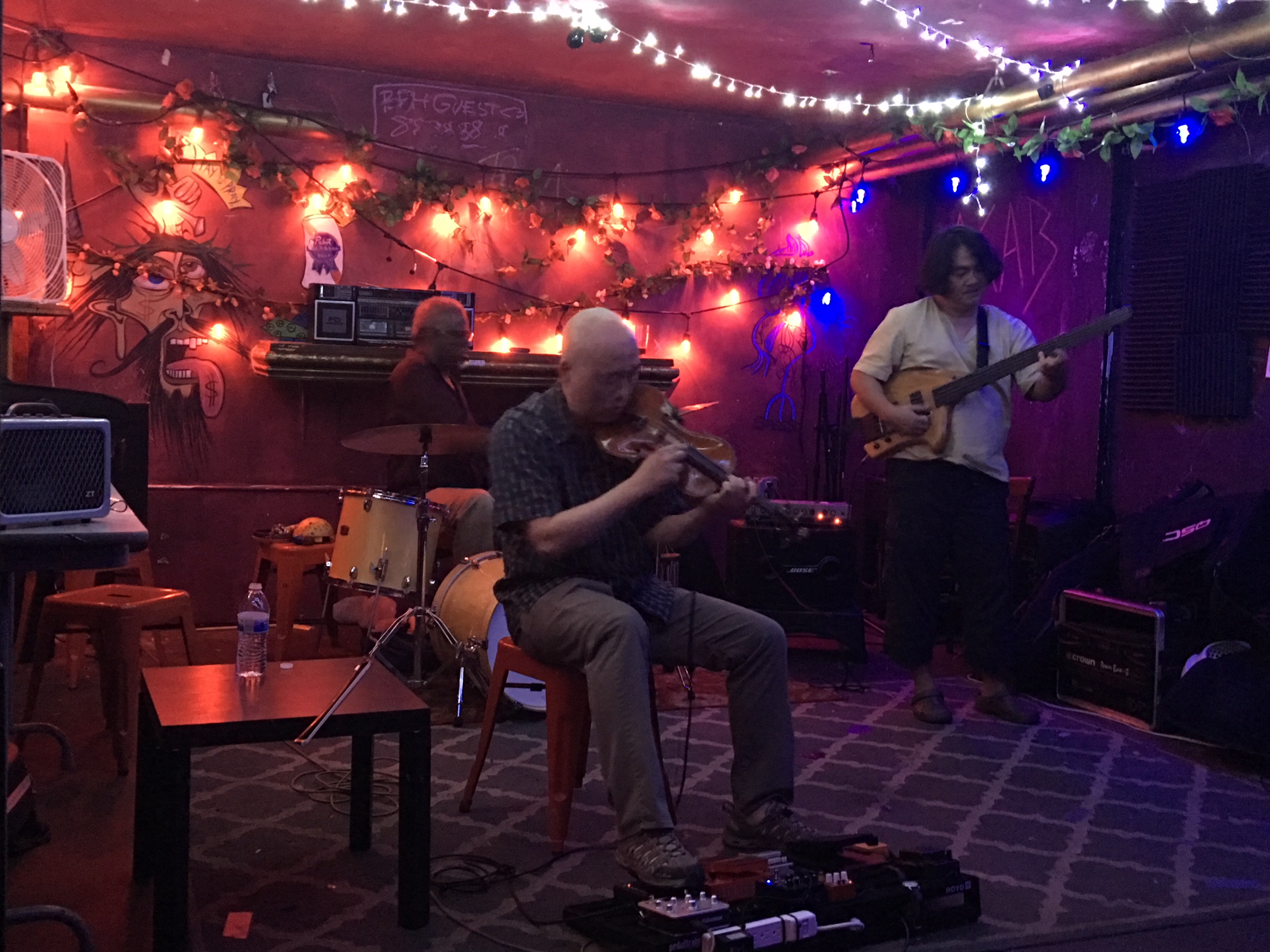 Jason Kao Hwang (violin) brought collaborators Stomu Takeishi (electric bass) and Michael T.A. Thompson (drums) to Bushwick Public House last night for a dynamic set of improvisations. The music was fully improvised, riveting throughout, and evolved impressively from beginning to end. The piece had four distinct sections, giving the set the feeling of a suite with some structural forethought. Throughout the music was presented in equal measures of dark and light, buoyant and submerged, heavy and weightless, vertical and horizontal, these elements often working in effectively as aesthetic counterpoint to one another.

Hwang opened the set with plucked strings that danced lightly above abrupt bursts from Takeishi and vertical and, at times, frantic beats from Thompson. It quickly evolved into the feeling of a jam with violin cutting precisely (when bowed) and at times in tandem with drums as the bass functioned as the glue to hold everything together. They played with that general aesthetic, with Hwang shifting to plucked violin at times over Thompson’s flat-sounding cymbal over fat bursts from the bass. Thompson did some very interesting work, keeping his sonic momentum going up and down rather than forward, which shaped the entire sonic encounter until later he spurred the piece into a sprint as the violin cut, danced, and then mellowed.

The second section was marked by Takeishi’s bass lines becoming more rhythmic, Thompson moving his attention to the lower-toned drums and various unusual cymbals. Thompson developed this into a growing barrage of off-kilter rhythms that propelled Hwang slashing confidently on the top.

The third section was announced with Hwang creating ambient effects using pedals with Takeishi following suit and Thompson creating the sound of wind chimes. Then, with rolling thunder erupting from the floor tom, Hwang rose ascendant with his most beautiful, vibrato lines of the evening and he soared for some time, all the while being supported by his two collaborators.

The fourth and final part of the piece was sparked by Thompson who issued booming, but sparser beats that seemed to spawn abrupt bursts from Takeishi’s bass. This coalesced into a driving rumble with a more regular beat upon which Hwang sailed with glissandos and quick cuts. Here Hwang displayed his narrative ability with the violin, melodic yet edgy, and always unpredictable and constantly moving. Then, after a slight lull in activity, there was a sudden push from all three musicians pushing for the apex with tight, dynamic hi-hat, drone bass, and ethereal violin lines arching, crying to the finish.

Gentrification and Art Space: The Case of Silent Barn